The Kansas men's basketball team defeated Washburn in the squad's first exhibition game of the season. 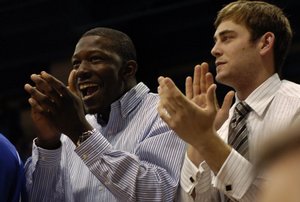 Kansas University coach Bill Self was at the polls bright and early to cast his vote on Election Day.

"I was in the voting lines at 6:25 (a.m.) thinking it was going to be crowded," said Self, who voted at Free State High.

There was just a handful of others in line for the start of voting at 7.

"I thought the lines would be so long. People told me they walked up with no line at all. I could have slept two more hours," he said, smiling.

"Yes he did," Collins said of Barack Obama.

Has he ever met the fellow Illinois native?

"No, his block is closed off now," he said with a smile, referring to Obama's residence.

KU sophomore walk-on Chase Buford did not dress for the game. He sprained a knee last week and is slated to miss another week of practice, Self indicated.

Xavier Henry, a 6-foot-6 senior guard from Putnam City (Okla.) High, might not pick between Kansas and Memphis this week after all.

Henry is slated to undergo surgery Thursday to repair a broken cheekbone he suffered in a recent automobile accident. His dad, Carl, told Rivals.com that because of the surgery, his son's decision likely would not be made and announced on ESPNU until next week.

"I joked with him. I said, 'You only played seven minutes. You played two more minutes than your number of fouls," his brother, Markieff, said.

Of the foul fest, Self said: "I've been telling our guys you'll foul out in five minutes the way we guard. That turned out to be prophetic. C.J. (Giles) may have fouled out in six minutes one time. Seven may have been the next closest."

All but the northwest corner of the fieldhouse appeared full for the game. Fans streamed for the exits with 7:50 left.

Self was not happy with KU's defense.

"This is the second-most points we've given up (in exhibition game) since I have been here. We have a lot of work to do on the glass and the defensive end," he said.

KU allowed 83 points in an 84-83 victory over Carleton in Canada over Labor Day weekend.

Tyrel Reed hit five threes, obviously not caring the line is a 20 feet, 9 inches this year, back a foot from last year.

"I don't think it'll affect too many people. Like Conner (Teahan) said, most people shoot two or three feet behind the line anyway," Reed said.

Self sent a message to his newcomers about possible playing time.

"If you are not going to guard or can't guard, you will not get many opportunities to shoot it. You won't be in as long," Self said.

As coaches like to say, "the fastest way to a players mind is through his butt." Let the psychology lessons begin.

no doubt ralster - HCBS has loaded up a roster with a bunch of athletes and i think it will be fun to watch these guys like the twins, releford, and tyshon get molded into legit ballers.this is going to be a bumpy season - dare i say an MU victory - but the future is bright.

The quote above from Self strikes me at the core of what I believe about basketball (when I play and when I judge other players): "If you are not goint to guard or can't guard, you will not get many opportunities to shoot it. You won't be in as long." This is why I love Bill Self's philosophy, and the way his teams play. Freshman and any player looking for minutes: Pay Heed...

Wise choice by Xavier. There is no hurry - just get well and then you can choose. We wish you the very best and speedy recovery friend.

What is going on with this trend of leaving early? KU fans need to know that this is unacceptable behavior. We are not LA, we stay until the game is finished or with at least a minute or two left.This goes for football and basketball.