Back up to speed

Kansas' Sherron Collins scoops the ball under the basket against Loyola in the second half on Tuesday, January 8, 2008 at Allen Fieldhouse. 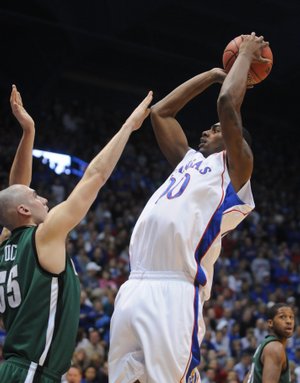 Points scored by Loyola's Gerald Brown in the first half

Points scored by Brown in the second half

Points by which KU outscored Loyola from the free-throw line

Blocked shots by the Jayhawks

KU's rebounding margin in the first half

KU's rebounding margin in the second half

Sherron Collins darted through the lane, went up as high as a 5-foot-11, 205-pound guard can sky and flipped the basketball through the hoop with his left hand while getting hammered by a defender.

It was apparent just five minutes into Tuesday's 90-60 rout of Loyola (Md.) College that Collins is finally close to recovered fully from Nov. 12 surgery on his left foot.

"I think that was the old Sherron back with a little more to give : but I'm pretty much back," Collins said after scoring 18 points off 7-of-13 shooting with three steals and two assists in 28 minutes.

He started in place of Mario Chalmers, who suffered a strained groin at practice Monday. Chicago native Collins played 18 minutes the first half, scoring 11 points as KU claimed a 41-24 lead at the break.

"I felt a little winded," said Collins, who had played no more than 24 minutes in a game since returning from a six-game absence on Dec. 8.

"I've still got a lot of conditioning to do. But I feel the strength coming back. I've been working hard to get to this point. By far it's the best I've felt since I've been back."

Collins started his third game of the season, the other two to open the regular season for the then-injured Brandon Rush.

"I found out 30 minutes before the game. Coach said Mario wasn't going to go. After that it was the normal game plan," Collins said.

He admits : "Yes, it's more fun to start, but I will do anything coach wants me to do to help this team."

Collins figures to return to his sixth-man role in Saturday night's Big 12 opener at Nebraska, since Chalmers' groin tweak is not serious.

"It's unfortunate Mario tweaked his groin, probably fortunate for Sherron. I wanted to play him more than I did, but the game kind of got out of hand," KU coach Bill Self said. "It was good to see him out there. He hasn't had the opportunity to play extended minutes. He did fine. He just didn't make shots."

Chalmers, meanwhile, "landed funny shooting the basketball yesterday," Self explained. "He could have played tonight. I didn't want to play him. We've got a big three-game stretch coming up here on Saturday."

That's Saturday at NU, followed by Oklahoma on Monday at Allen Fieldhouse and Missouri the following Saturday in Columbia, Mo.

"Hopefully he'll be close to full speed by Thursday and be ready to roll Saturday," Self said of Chalmers.

He hopes Collins continues to progress as well.

Collins said that indeed is happening.

"I'm getting strength back in my left quad," said Collins, whose stress fracture in his left foot is completely healed. "My quad is firing. Before it felt like rubber. It's solid now."

He burned rubber down the court hitting a big three with 4:29 left in the first half. His bucket followed a hoop by Russell Robinson, the two starting a 26-4 run that followed a tongue-lashing by Self during a timeout with KU up just 26-22.

"Everything fell in place. I'm glad I'm back," Collins said. "I didn't shoot well. Coach tells me to be more aggressive and shoot when I'm open, so that's what I'll continue to do."

"We don't care who scores. As long as we win it's a happy locker room," Collins said. "Darnell (Jackson, nine points) scored 25 last game (at Boston College). I think it was 'Shady' (Arthur) the game before that. I don't know how many I had tonight."

We started 22-0 in the 96-97 season! We would've been undefeated had it not been for a lucky shot in Double OT by Mizzou! I hope we surpass these numbers!

if sherron and rush get going... watch out america!!!!!

I hope we win the National Championship. 15-0 is great, but going undefeated into March will add so much pressure, I just don't think it would be good for us. I am not rooting for us to lose one or two games, but at the same time, I know we are good enough to win the NC, so if we let one go later this season, and get rid of the "undefeated" label, I won't cry about it. I just want to go undefeated in early April.

I hope we go undefeated. Why lose a few when you can win them all?! It doesn't appear like pressure is gonna phase this team.

I thought the same thing, mgolany. How does the LJW forget about 96-97? Perhaps the best starting five to ever take the floor for KU. I remember where I was that night when Norm's boys had their biggest moment of the entire season. 22-0 was impressive and I do believe KU can do that or better this year. The only ones that can beat us is us. I'm not saying we will be undefeated heading into Selection Sunday, but there isn't a single game on the schedule where one might think, "Gosh, I just don't really know if we can win that one." We are probably going to have an "off night" a couple of times and may not escape unscathed out of a very good Big XII this year, but this team has as good a chance of any team in a long time. I just hope we can stay healthy the rest of the way. With that, proper focus, and playing KU basketball like KU basketball should be played, its exciting to think about how high this team can go.

I think what's significant about this run (as opposed to the 1996-97 run) is that we have lost, at different points, three of our significant players, two for long stretches. We are "finding our way" so to speak, and still undefeated. While that is encouraging, it's also worrisome. Worrisome because injuries tend to compound rather than disappear as the season progresses.

Now that conference play is about to start, the grind of the season is really going to wear on our guys that are trying to get healthy and in condition. Last year by the end RussRob and Sherron were both limping along. I just hope we can get the right mix of rest, rehab and repitition to make this team click when it counts.

OK Jayhawk Nation, Step up and vote! Go to cbssportline.com and then Spin and vote for the KU cheerleader! She is in the semi-finals against the Houston cheerchick! Just more pub for KU if she wins!

Associated Press are awful fact checkers. Check out the article on ESPN. According to them, the last Kansas team to go 15-0 was the 1989-90 team.

justanotherfan, they do mention that the last time we were 15-0 was the 1996-1997 season in the box on the left, underneath were it says "go figure" but in the 2nd to last paragraph of the artile it says the last time was the '89-'90 season. I think that's what everyone else was referring to.

We really could go undefeated in the big XII, and hopefully the post season too. Texas, Texas A&M &, I hate to say it but K-State on the road, could be challenges for us but still all winnable none the less.

I don't go for the "good losses" theory at all. We haven't gone undefeated with some truly great teams during the last 20 years and is hasn't got us a championship. Let's try the undefeated route and see where it takes us.

Screw losing a game or two to take some pressure off...if you can't take the pressure, don't play the game. I could only see pressure playing a factor if this was an all-freshman and sophomore team...but considering the amount of experience this team has, conceding to pressure would mean this team doesn't deserve a national championship or an opportunity at greatness. You can only achieve great things when you aren't afraid to lose.

Dont' get me wrong. I am not rooting for them to lose a game or two, but if we do happen to lose one in the regular season, I won't be sad about it. It's no coincidence that we have not seen an undefeated national champion since IU in 1976. It's DAMN hard to do! Even the '91 UNLV, one of the most dominant teams of all time, loaded with SENIORS with All American credentials (LJ, Augmon, Anthony) could not handle the pressure and lost to a Duke team they would have beaten 9 times out of 10. The pressure got to them, and they lost. I'd hate to see that happen to us.

mgolany- yes MU's Corey Tate hit the spin-and-throw after grabbing the loose ball in Double OT, but we never should have gotten there. We were down 2 with about 9 seconds left and Jacque was at the line. When Jacque missed the free throw, Raef just grabbed either Derek Grimm or Kelly Thames (I think it was Grimm) and threw him out of the way to grab the ball and put it back to tie the game. Obvious foul that the refs should have called. Enjoyable to see Hearnes Center going nuts because of it, but we probably don't get to OT if they call that foul on Raef.

This squad has such a knack for stealing the ball. Compared to that '96-'97 team with such a highly regarded backcourt of Jacque and Jerod, this year's squad has 171 steals in 15 non-conference games compared to the '97 team which had 151 steals in 14 non-conference games. We are averaging 11.4 stls/gm and if we can keep that average above 10 through the conference season (better competition and more familiar with our personnel), this team is going to do some special things.

Why all the talk about going undefeated and winning a NC? This is the Jayhawks fellas. Even if they do go undefeated regular season, which is highly unlikely, they will wet the bed in the NCAA Tournament like they have been doing for the past 19 years! How's that for fact checking.

I look forward to others' submissions.

APD...I love the fact that this is an open forum and fully support that you can say almost anything (in fact, I'm sure you'll come back with something aimed at me). But whenever you're on the board you say the same thing. In my opinion it's a weak take, and you're entitled to that, but bring something different on occasion. If you're not a Jayhawk fan, as some protest, that's fine, but don't pretend to be one while bringing the same take over and over. It's boring.

APD- Did you just loose a bunch a money betting against the hawks or just having a bad day :( That post was really, really negative.... Come on man and get on board... We just won the Orange Bowl in football and are off to a great start in B-Ball.... no reason to be a doubter.

lance1jhawk, he is not a doubter, he is a Mizzou Tiger. Just ignore him.

The more they win, the more experienced they are at winning. Losing a game will not help.