KU's Darnell Jackson, right, puts up a shot in the lane against Portland State's Scott Morrison. 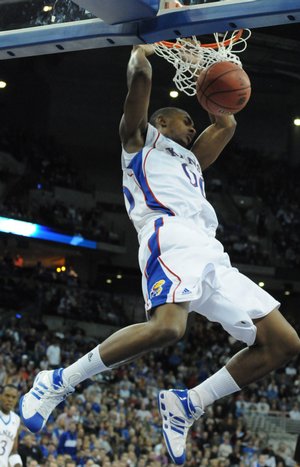 -1KU's rebounding margin in the first half

+8Kansas' rebounding margin in the second half

Omaha, Neb. — It took just one knock on Darnell Jackson's Embassy Suites hotel room door to rouse him out of bed.

"I wasn't sleepy at all," Jackson, Kansas University's senior forward, said, eager to hit the shower at 7 a.m. Thursday after receiving an in-person wake-up call from KU's hard-working team managers.

"I was ready to get up. I think we all were today."

Any concerns about the No. 1-seeded Jayhawks sleep-walking in their 11:25 a.m., first-round NCAA Midwest Regional contest against No. 16-seed Portland State were unfounded Thursday.

"Coach (Bill) Self made sure we were ready. He jumped us early this morning. He told us, 'You guys gotta wake up!'" Jackson exclaimed.

Self saved his most passionate words for his official pre-game talk, however.

"There were a lot of nerves," said senior guard Russell Robinson, who held Big Sky Conference MVP Jeremiah Dominguez to just three points the first half off 1-of-5 shooting. "Coach wanted to make sure everyone had energy, to get us pumped up.

Self - his Jayhawks hit eight of 13 threes the first half and 12 of 25 for the game - had a reason for speaking up in the locker room.

"Being a 1 seed is great. A 1 seed will lose (in first round). It will happen. And when it does, it will be one of the intros to the NCAA Tournament until eternity. We didn't want it to be us," Self said.

"I definitely was probably more animated today before the game," he added, "just because it was very early and also, the arena is cold. So early and cold usually lends itself to not great energy. Our energy wasn't fabulous, but it was pretty good."

Sophomore forward Darrell Arthur, who set the tone diving for a loose ball in the opening minutes, scored four points as KU led, 11-3. The Jayhawks were ahead, 24-18, with 9:17 left in the half, but then started clicking courtesy of some dandy outside shooting.

Sherron Collins, who was not 100 percent after bruising his already banged-up right knee at practice Wednesday, had one three, while Brandon Rush hit a five-foot floater, a stickback and a trey in a 12-0 surge that gave KU a 36-18 advantage.

"We played great," said Rush, who joked that he "got to sleep in" Thursday, with the managers' loud knock on his door coming at 7:15 a.m. "We played great in the first half. We made shots.

"I made a conscious effort to drive the ball and not just shoot from the outside," added Rush, who made four of nine treys.

"We kind of puttered around," Self said, acknowledging things pretty much were over by halftime.

"I was always told when you wrestle, it's so much easier to wrestle when you are on top," Self explained. "You expend much more energy on the bottom, trying to (escape). It's the same in basketball. You burn more energy when you are behind.

"You cannot let the other team think they can beat you. They never really challenged us in large part (because) we were up early by 10."

Self, who planned to spend Thursday afternoon and evening watching tapes of UNLV and reading assistant coach Joe Dooley's scouting report on the Rebels, acknowledged it'd be a long, but happy, day.

"My wake-up call was 6 a.m. I had to get my workout in," said Self. "I did treadmill today. I don't say this to be disrespectful to Portland State, they have a good team and played very hard, (but) the tournament is starting right now. We're going to have to play better from here on out, especially on the defensive end."

UNLV will put up a better fight than PSU. We need to maintain the intensity level, stay hungry, and shoot better than 47% from the FT line (these are your last collegiate chances Sasha.) We can do this!

maybe when we practice it should be no-contact for collins?

ESPN/CBS is making such a big deal about UCLA creaming Mississisppi Valley State...no disrespect (since it is the alma mater of the great Jerry Rice) but they are barely over .500 and should have been in the play-in game. I think Colorado could have held those guys to 20 pts.

Kansas by far played a more challenging game which will help us down the road.

I just looked at the matchups for Saturday...it's going to be a great day of bball....a bunch of really good matchups.

As long as the Hawks pretend they're in Allen Fieldhouse, they can't lose. Send 'em the Phog.

The mind is a powerful thing, and those ghosts that dwell in the cradle of basketball, Lawrence KS, they can be delivered if we just send them that Fieldhouse energy.

Send them your passion, all the way from wherever you are, and they CAN'T LOSE.

I'm sure glad the game of basketball isn't all touchy feely like KG makes it sound. It doesn't matter where you play in the NCAA tournament. The better team, the team that plays harder, the mentally-tougher team, the better defensive team, the more tenacious rebounding team usually wins.

If Rush and Mario keep playing at the level they're playing on the perimeter and Sherron stays healthy (not another KNEE?) and can break down defenses by getting in the lane and Shady can stay out of foul trouble and Jackson plays like a man in the paint and Russ Rob keeps them all on the same page..........this will be a special run.

"Sherron Collins, who was not 100 percent after bruising his already banged-up right knee at practice Wednesday, ..."

That's the scariest thing I've heard all year. Is it too much to ask that just ONE TIME, ONE TIME, KU can get through a tournament without a crucial injury??? PLEASE stay healthy, Sherron!

Maybe Sherron should run over to see Mark and get some football pants... I bet Mark has some around somewhere.

This happened to Sherron last year that's not fair:(