Kansas University forward Darnell Jackson roars after a dunk on the opening drive against Oklahoma. The slam set the tone for Jackson and the Jayhawks; he went on to lead KU with 17 points in an 85-55 blowout of the Sooners on Monday at Allen Fieldhouse. Jackson was officially traded to the Kings Wednesday.

After less than 48 hours since the Jayhawks took the floor against Nebraska, they went against Oklahoma and looked to remain unbeaten on Monday night.

The last thing Darnell Jackson wanted to see Monday night was his buddy, Blake Griffin, hit the deck because of a sprained medial collateral ligament in his left knee. 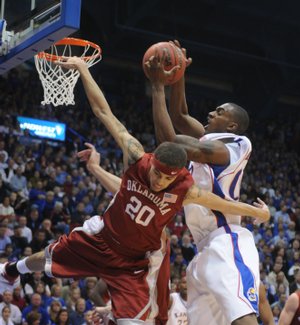 Points scored by the ballyhooed rookie, 15.4 below his average

Free-throw shooting by OU (90 percent), which paled in comparison to :

The last thing Darnell Jackson wanted to see Monday night was his buddy, Blake Griffin, hit the deck because of a sprained medial collateral ligament in his left knee.

"I was looking forward to playing against him. I know he was looking forward to playing against me. I've known him since he was a little kid," Jackson, Kansas University's senior forward, said of fellow Oklahoma native Griffin, who went down battling Jackson for a defensive rebound five minutes into KU's 85-55 annihilation of Griffin's Oklahoma Sooners at Allen Fieldhouse.

"I wish him the best. I just want him to get well soon," Jackson said.

Jackson already had erupted for six points - including a vicious dunk on a hustle play off the opening tipoff - and KU led, 11-2, when fab freshman Griffin went down five minutes into the contest.

Griffin, who missed his only two shots, iced his knee until midway through the second half, when the team trainer applied a heavy wrap. Griffin will undergo an MRI today.

"I think we got tangled up a little bit. We both jumped. I think his leg was under mine. I came down on him. I think he was trying to grab onto me so he could catch his balance," Jackson explained.

"I guess he slipped off. His brother Taylor (eight points, 2-of-11 shooting in 34 minutes) was down. I think everybody was down because he's a great player."

Jackson arguably again was the best of all of KU's players Monday: He scored 17 points off 8-of-10 shooting with eight rebounds in 25 minutes.

But it was Jackson's flush to open the scoring that energized KU's loud crowd - and the entire team.

"Brandon, Mario and Russell all told me that is what set the tone for the game. I just tried to make sure I hustled the ball down, and next thing I knew I was open for a dunk," added Jackson, who also had a one-handed dunk late during which he tweaked his aching back.

Jackson and Darrell Arthur scored eight points apiece the first half, while Rush had 11 off 3-of-5 three-point shooting as the Jayhawks led, 40-20, at the break.

"That play by Darnell to start the game was a great play. It set the tone for the first half," KU coach Bill Self said.

"I feel good," Rush said. "My teammates are doing a good job of getting me the ball, and I'm making shots right now."

Like Jackson, he was bummed to see Griffin and 15.4 ppg average go down early.

"I didn't expect Blake to get hurt. I was looking forward to seeing him play," Rush said. "I didn't want to see it. It's tough he got hurt, but you've got to play the rest of the game.

"Tonight we tried to run Longar Longar up and down the floor so he'd get tired. He still had a great game."

Inside player Longar hit nine of 18 shots and three of four free throws on a night KU swished 17 of 18 free throws to OU's nine of 10.

KU's defense held the Sooners to 32.8 percent shooting and just four of 16 threes.

"I thought we played very well. We were quick, and guys were flying around for the most part. Unfortunately, they were without Blake Griffin," Self said after his team improved to 17-0, 2-0 in the league. OU fell to 12-5, 0-2. "I'm sure it deflated them when he went down. I certainly hope it's not a season-ending injury and he can be back in a short amount of time because he's a terrific prospect. He's a great kid. We recruited him.

"You always hate to see anybody get injured. We caught a break from the beginning with him not being here, but I was really looking forward to our guys getting a chance to guard him because he is a special talent."

Kansas will face Missouri on Saturday in Columbia, Mo.

Thanks SFBayhawk... I was just coming to write the same thing about "Medical" = Medial!

It was too bad seeing him get injured, reminiscent of Durant going out last year. That could have been the most talent coming into Allen this conference season. There's always the tournament.

Another good win for the hawks... I still feel like we have not hit our stride. I see more room for improvement considering Sherron and Brandon are still getting healthy! I can't wait til March!

I could care less about the AP or the polls... all that matters is that we win our last game this year!

Yes but if two are in foul trouble, we may need to rest one other, therefore (possibly not likely) needing a fifth

That's "medial" collateral ligament, not "medical". "Medial"-towards the mid-line. This injury hurts none-the-less and ligaments are frustrating in that they heal slow without a generous blood supply.

Blake is an outstanding talent, as I was dazzled by his performance from a complacent look at the OU/West Virginia bball game. As March performance is predicated on a competitive conference (why I would write-off Memphis off hand, and blaspheme the Little XI of Boy-Roy years), it would have been great to see this kid at AFH. And VERY useful for this team.

On to Columbia where the bigs are not as important as the smalls. Ya gotta have good ball-handlers and attack their pressure. Texas didn't. Should be fun.

I was disappointed to see Griffith go down last night. I knew OU would be hard pressed to stay with us even with him in the lineup, but without him, I knew the game wouldn't stay competitive for long. He's a great player. I hope he gets healthy because OU owns some impressive non-con wins that should help them get into the tournament, which will help our seed, like SFBay said.

17 of 18 from the line boys. 17 of 18. coupled with the nice charity work at nebraska, and i'm feeling better. i don't think i'm alone in thinking that free throw shooting can sink this team come tourney time in a close game. if our bigs keep improving, we can strike a weakness off the list.

I agree. I just want to win the last game of the season for a change.

ESPN spent more time reporting off the court matters in the second half because it was such a blowout. (George Brett interview, Jackson Story, etc.) The ESPN anchormen attending the game that were interviewed were attending for fun. Not an assignment. They had quite an endorsement / recruiting line saying Allen Fieldhouse is the best college basketball arena in the country. It's about time the debate / the Phog is cleared about the Mecca of college hoops. Cameroon is a supersized wood paneled high school gymnasium. Allen Fieldhouse is an architectural gem, and the best experience to watch a basketball game with 16K plus Jayhawkers.

The lead for this story is hilarious. The last thing Jackson wanted to see was this very specific injury to Griffin, not just an injured Griffin, but a sprained medial collateral ligament.

The last thing I wanted to see Monday night: terrorism... or maybe a scantily-clad Bea Arthur. I could go either way on that one.

On another note, I thought we could have gotten some more minutes for our lesser used players, especially Roderick, Tyrel and Cole. Those are guys that could figure into a game at some point, but don't get very many minutes on a regular basis. I was hoping to see more of them, but that didn't happen last night. I don't know if its because we have a long layoff between games (Monday to Saturday), but I think it may help later because an injury or fouls could make one of those guys (Cole especially, because he's a big) a major factor in an important game.

Speaking of getting our guys some extra minutes, I think Kleinmann could use a little playing time if we could get him some. Here's our roster. 12 guards, 2 forwards, 3 centers. If we have 2 or 3 bigs in foul trouble we will need Kleinmann to step in. I believe he can get it done too. A big body is a big body no matter how much experience you have.

With at least 20 fouls to commit down low it's hard to imagine 2 or 3 of our bigs in serious foul trouble simultaneously. Possible? Of course it is, but by that point in a game you'd have to expect that the opponent's bigs would also be in serious foul trouble or even fouled out. Perhaps a team like Memphis matches up well with us down low with guys like Dorsey, Dozier, and Taggart, but we have a height advantage down low over that other top rated team. I like our chances!

Memphis must lose so KU can have higher seeding...

I would rather go to little rock and then Houston. I really dont wanna go Omaha and Detroit rout.

If Memphis goes unbeaten with there weak conf., Ku is ganna be placed away from their home just like last time(#1KU in Cali (bunch of BS))... i freaking hate these sites.....

Okay did you guys study those sites?? Did you guys noticed something... How close UCLA is ganna be from home if they are #1 or #2 untill the year 2010(next 3 yrs)??

This is so unfair for midwest schools...