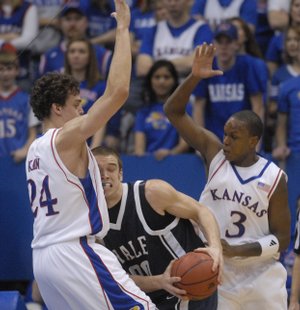 Steals by the Yale team

Yale's rebounding edge over the Jayhawks

Bill Self motioned for his point guard to come over to the bench area with 6:13 to play in Kansas University's 86-53 rout of Yale on Saturday night at Allen Fieldhouse.

No strategy was discussed between KU's coach and coach-on-the-floor Russell Robinson this time - not with the Jayhawks leading by 34 points.

He was referring to a steal that would had given the 6-foot-1 senior a school-record-tying nine thefts.

A grinning Robinson returned to center court and played ballhawking defense, but couldn't swipe one additional steal before exiting with 4:46 left and KU up, 77-38.

Robinson finished with a career-high eight steals, surpassing the seven he snatched against Oklahoma State on March 10, 2006.

"I don't know," Robinson said, asked if Self informed him he was one steal off the record during their brief encounter. "I just kind of sort of knew. Somebody told me."

Prodded further by reporters who grilled Robinson as if he were a witness on the stand, he acknowledged: "I just knew coach said I was coming out in a little bit. I took it as I had to get one more, try to get one more before I came out.

"I saw the subs over there and hoped to get one more. I was hoping to get a dunk with it. I didn't get that. Like Mario (Chalmers) said, 'There's a lot more games to be played.'''

Robinson - he had all those steals in just 25 minutes - was asked if Miles, who is playing professionally in Spain, needs to be concerned about being erased from the record book by season's end.

"He might need to be worried," cracked Robinson, who had eight of KU's 18 steals - the most since the Jayhawks had 19 against UNC-Asheville on Jan. 2, 2003. "It felt kind of good. I'll try to go for it again, definitely try to get it again."

Robinson actually had a chance for No. 9 just prior to his conversation with Self.

"That ball went right through my hands," Robinson said of an errant pass in the lane with 6:52 to play. "That could have been the career steal if I get it. Everything happens for a reason. It'll keep me motivated to try to do it another time."

Robinson, who had five assists but scored just four points off 2-of-4 shooting, was not concerned about offensive stats Saturday.

"I didn't get the open shots I normally get. We had guys making shots, making plays. I can control the game in other ways. Like I said before, I just like to look at the stat sheet and see I did something," Robinson said.

This night the positive stat came in the steals category. The (13-0) Jayhawks benefited from a fullcourt press much of the game against outmanned Yale (3-7).

"We wanted to come out and pressure. It was our emphasis," Robinson said. "Off the break, everybody gets a big belly, Christmas dinner and stuff. We wanted the same intensity we had before break."

KU, thanks in part to six points by Chalmers and four points by Darnell Jackson and Darrell Arthur, raced to an 18-4 lead. It was 42-19 at halftime, the Jayhawks forcing 17 turnovers on a night Yale committed 27.

Jackson finished with 20 points off 9-of-12 shooting. Arthur and Chalmers had 11 and Brandon Rush 10.

"We played well for the most part. I thought for the first eight minutes of the game we had great energy," Self said. "I was excited about how we played."

He was especially pleased with how Robinson played.

"He definitely set the tone defensively. He was good," Self said. "He could have set the school record for steals tonight if he'd played 32-34 minutes."

KU will meet Boston College at 11 a.m. Saturday in Massachusetts.

I hope RR is the KU basketball coach someday. He is just so tough.

Brock, the impressive thing about Russell, is that eventhough it is Yale, those guards for Yale should have come up with a strategy to swing the ball OR protect it better, etc; YET they were unable to counteract Russ. 8 steals by one guy is game-changing, then you add the rest of the KU teams' contributions. I was reading on the official KU website in the player bios regarding Russ: I did not know that coming out of HSchool, he was ranked 8th and 31st for guard/shooting guard in the entire nation for prep players, averaging 22+ pts/game. While he hasn't needed to score like that for KU, he basically dominates every phase of the game. Way to go Russ!