Instead, Boston College's best basketball player and his Eagles teammates ran into 'Red 10' - the code word for KU's 3-2 zone.

"I haven't seen the Kansas Jayhawks go zone in years. It took us awhile to adjust," a befuddled Dudley said.

The zone, which protected several foul-plagued players, actually is brought out of mothballs on occasion. Not frequently, however, during the coaching regimes of Bill Self, Roy Williams and Larry Brown the past 24 years.

"We practice it, believe it or not, about 10 minutes every other day," Self said. "Today it paid off."

KU's coach didn't use the defense just to force the cold-shooting Eagles - who missed their first 11 three-point tries and finished 4-of-19 - to fire away.

"I thought at the rate we were going, we'd foul out our whole team," Self said, most notably alarmed when Brandon Rush (15 points) was called for his second foul just 8 1/2 minutes into the game. 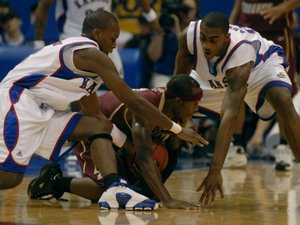 "It all boils down to foul trouble, all your players being in foul trouble. It's why we went zone," said Rush, the man in the middle on the front line of the zone. "I like to play out there. You don't have to do too much running.

"We have never played that much zone in practice at all, (but) we've been practicing it the whole holiday break. We just pulled it out of the hat. To come here and have the zone be that effective today, I think we'll probably run it a lot the rest of the season. The zone was the key to our win tonight."

At times, KU had an oversized zone, with Rush at shooting guard and Julian Wright at small forward to go with a point guard and two true big men.

"It still has some holes in it, trust me," Self said. "Our zone looked better than it was because they didn't make any shots, at least not many threes."

23-0 KU's advantage in points off turnovers in the first half 8-8 Scoring deadlock by both teams in points off turnovers in the second half 0-for-9 B.C.'s first-half three-point shooting 0-for-4 KU's second-half three-point shooting 14, 8 Points, rebounds by B.C.'s Jared Dudley 19.3, 9.1 Scoring, rebounding average for Dudley coming in 19, 15, 7 Points, rebounds, blocked shots by B.C.'s Sean Williams 10 Players on teams combined with at least four fouls (one fouled out)

KU's zone defense, which Self said also was used to force longer possessions during a second half in which KU led by as many as 26 (56-30 with 16:40 left), was countered by B.C.'s matchup zone, which held the Jayhawks to 46 percent shooting, including five of 13 threes.

"We had a good run at the end of the first half," Wright said of a 24-4 run that was fueled by six points by Mario Chalmers and Sasha Kaun, five from Rush and four from Darnell Jackson.

"I think the fouls, the way it was called, we didn't get into a good flow the second half. Neither team did. Both teams were going through the motions. Coach was telling us to attack, to be aggressive."

Rush had just three points the second half, one in which Chalmers, who had eight, prevented the Eagles from creeping any closer than 13 points.

"We don't have that killer instinct yet, but I think it's something that's going to come," said Darrell Arthur, who scored eight points off 2-of-8 shooting with five assists in 38 minutes.

"We had them down big, and no disrespect to Boston College, but this is a game everybody should have been able to play in."

Instead, Self mainly used eight players. Brady Morningstar logged one minute the first half in a game that didn't reach blowout status.

"We wanted the game to be faster, and the officials called it so tight," Self said. "Neither team got any rhythm, especially in the second half. We would have liked the game to be a little faster. We didn't do a very good job in the last 10 minutes.

"We were trying to put the game away and be aggressive and still use the clock. There's a fine line there."

"The guys did some good things. We practiced pretty well the last two weeks, and I'm proud of how they competed. It was a good reflection on how we played today," Self said.

The players, who now break for Christmas, will return for practice Tuesday night.

Next game is Thursday against Detroit Mercy. Tipoff is 7 p.m. at Allen Fieldhouse.

all of you jump to conclusions without really reading the posts, are you kidding me jayhawker_97, do you not realize that Jimmy_Dean was making fun of jimjones. Besides, everytime I see a fire self comment it it jimjones, I understand criticism but give me a break!

It is still a good win against a quality team. The key is the last 5 minutes in the first half, which put the game out of reach. Kaun was excellent in that stretch.

If they're going to use the zone more, they must learn how to do a better job against the interior passes. The thing that was pleasing was how they used the zone to do a better job of pressuring the perimeter shooters, directly leading to Boston's difficulty behind the three point line. Unfortunately, the tradeoff was leaving larger gaps for passes to penetrate the paint. More practice time in the zone will now be required as other teams will develop plans to beat the Jayhawk zone. Having a working zone defense in their bag of tricks will help make them stronger come conference and tournament time. There are teams that will take advantage of the zone, so it's best not to become overly reliant on this one approach. Keep learning. Play hard. Play smart. Go 'Hawks!

Actually Mitch the zone worked perfectly because they couldn't put together any offense the second half just like we couldn't. More than half their second half points were from the stripe. The interior defence for the most part was excellent just like the perimeter was great. We had players shifting off their man to cover the open man over and over and over, when the other team has as much or more size than you do though it looks like they had a great inside presence but obviously if they had they would have rallied back even further. Oh and don't count on seeing too much of that zone unless we have more than a couple player in foul trouble. Good win against a good team.

nobody could put together any offense because the game was officiated so crappy! Everything was so tight that nobody could get into any sort of flow. We flat out played great in the first half, and we held off every run they made! Bottom line.........Impressive win!

Yep, Self is an idiot. Gameplanning is nothing in sports, and you should just switch your whole defensive philosophy just for 20 mins of basketball. The only way Self would be an idiot is if he actually listened to anything that djkc28 had to say! You, my friend, are the idiot.

You all crack me up. Bradley hit 11 threes even when we were in thier face. You don't switch to a zone when a team is shooting that good. Same thing with Oral Roberts. Boston College was cold so the zone worked better than it usually would. Plus Boston College just didn't do enough driving and dishing out to find someone open.

How bout Andre 3000 though? That guy can block some shots. I think he can tie his shoes without bending over.

Those who keep criticizing Coach Self are not true KU fans. Why can't you just be happy with the win and the fact that our Jayhawks tried and succeeded with a type of defense they are not familiar with. We are improving in various aspects of the game. We need to show opponents different looks. We don't want to be predictable. I think the defense switch was great, and the fact that Coach Self did not do it vs. ORU (or even Bradley last year, jeez, we lost, get over it) does not make him an idiot (got that djkc28?). Way to go Hawks! All we need to do now is learn to break down the opponent's zone defense. Happy Holidays!

Think of BoCol as a Bucknell or a Bradley on an off shooting night. 21% from trey won't beat KU when KU hits 38%. But suppose they were hot and shot 49% from trey (some thing all teams do several times a season); that's 15 more points, and nine fewer KU rebounds and a final score of 84-81 with KU outrebounded 34-32. Next suppose KU misses just one more trey and a free throw. Its 85-84 BoCol. Next, suppose the refs don't call the game tight, which they did yesterday, but never do in the March Madness, and Williams gets to really manhandle KU on defense and the boards and BoCol players get away with more fouling on KU's trey shots. In a looser game, KU tries to run more, but BoCol gets more stick backs and KU gets fewer and with fewer rebounds and more BoCol scores, KU gets fewer opportunities to run. This game easily turns into a ten point win for BoCol...ON KU's HOME COURT!

And all these hypotheticals are feasible and have occurred this season and last producing losses to lesser teams.

For KU to take the next step in developing into a top team, it needs to beat one of these mid majors on one of their hot nights. Once it it can do that, then it can think about beating a blue blood program on one of its hot nights--what you have to be able to do to win a ring.

Until then we are just talking about KU beating teams having off nights.

Have you ever thought about the fact that maybe we make some of these teams have an off shooting night with our defense?

enough talking, now, can anyone tell me where the video clip of this game is? i wish someone can sling it for me in Lawrence..

Your wright we do need too "paly" up to our portentions. FIER SELF!@

Jimmy Dean, eat your sausage!!!!!!!!! jim jones, go enjoy Christmas with your idiotic brother Jerry Jones......you are both idiots.......go back to manhattan

What if there were no hypothetical questions?

I enjoyed this game. Sasha looked good. Darnell has the right idea. Mario is just shiningly consistent this year and proving to be reliable. Russell's sprained wrist is telling its story on his FTs and 3pt attempts, but hope that improves. I recently watched an NBA game (LA vs Miami), and was reminded of what a few years can do for a player's consistency and accuracy. Those guys make 3pt shooting look ridiculously easy. We have to realize we are talking about young player's @ KU who are "coming along". All I can say is Mario looks good and Sherron and Brandon seem to have that touch as well (from 3pt range). Remember Boschee's shooting--I'll never forget it--best 3pt % in the history of the BigXII. We will see where Mario, Brandon, & Sherron wind up on that list.
Some of these Bill-haters need to get off this site. I suppose if we are 14-2 or 18-2 or 24-4, they will not be happy. Newsflash! Like it or not, Self IS the face of KU basketball. The most ridiculous proposition was someone calling for Coach to be fired ASAP--have you ever heard of a D-1 coach being fired "right away" for inconsistent play (in years of watching college ball??), with a 10-2 record? Maybe for some highly serious off court transgression or maybe for a team that is 1-13 or 2-18 or something dismal like that. I am tired of this baseless negativity. Live in the here and now, and look forward to and plan for the future. Oh, and enjoy the KU games like I try to...