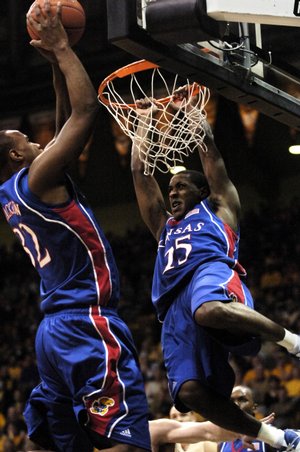 Boulder, Colo. — Being in Indianapolis instead of Kansas City certainly didn't stop Glenda Rush from getting in her youngest son's ear in recent days.

The matriarch of the family - in Indiana while middle son Kareem is playing for the Pacers - called Brandon Rush after watching Kansas University's basketball team fall Wednesday night to Kansas State.

"My mama jumped on me again about going to the hole," Brandon said with a sheepish grin following KU's 72-59 victory Saturday at Colorado. "She got on me after the K-State game, saying I disappeared in the second half."

Wednesday, in the 84-75 setback, Rush finished with a line that looked fine on paper - 15 points and seven rebounds. But 12 of those points and all seven boards came in the first half. In the second stanza, he was just 1-of-3 from the floor, hitting a three-pointer with the outcome already decided in the game's final minute.

Brandon, convinced Kareem may have dropped added hints to Glenda about what little bro needs to improve on to avoid a repeat of the second-half vanishing act, took mom's words to heart.

Rush finished Saturday with a line nearly identical to the one he posted three days earlier: 15 points and six rebounds.

But in Boulder, he didn't disappear at the break. KU couldn't afford for him to, tied at 30 after 20 minutes.

"He played big for us," KU senior forward Darnell Jackson said. "And now he knows that he needs to keep that momentum going every game, because we're gonna need him."

Rush and Jackson were involved in a huge late-game run that swung the tide in the Jayhawks' favor for good. In that spurt, Jackson finished a lob toss from Sherron Collins and nearly ripped the rim from the glass. Second was a thunderous two-hander from Sasha Kaun. Then came a soaring Rush one-handed slam in transition off a Mario Chalmers bounce pass in front of the students who taunted him while at the free-throw line moments earlier. Finally, Chalmers took a backdoor pass from Darrell Arthur and swung on the rim following a flush of his own.

The slam provided the final points of the day for Rush, who scored eight of his 15 after the intermission. He also made it a point to take CU defenders off the dribble, even getting to the free-throw line on a couple of occasions.

"I really think that Sherron's pass to Darnell, Mario's pass to Brandon in transition and then the backdoor play, we actually had three athletic plays in a row that gave us confidence and got our guys going, no doubt," KU coach Bill Self said.

Rush liked the return of KU's high-wire act late in the game. It could serve as a springboard, too, into Monday's second showdown of the year with Missouri.

"It's been awhile since we've had a lot of high-flying, alley-oop plays like that," Rush said. "It pumps the energy right into us.

"They stuck with us the whole game until the end, when we started pressuring, getting out, and it opened up from there."

If his mother can see it, even with a little help from Kareem, then you know it's true. B Rush is a very good basketball player....he just has to take another step. he should average 18 or 19 a game....and hard dribble drives producing layups, dunks, or getting fouled...will help him get there...and help the team just that much more.

anyone else just waiting for b.rush to get in the zone and stay there? he has been on the verge all season. soon he will be taking over games paul pierce style. then, no one can beat us.

dont feign interest in the Hawks. everyone knows better. you either disappear win Kansas goes deep into a win streak or pander with statements such as these. then when KU loses you belch out the nastiest tirades that have every been witnessed.

Kansas fans are smarter than that.

You're kidding me. Your mom has to get you motivated to play the game how it is supposed to be played. I love my mother dearly, but I didn't have to draw inspiration and motivation from her to step onto the football field or the wrestlinig mat to know what I had to do to competete. That was high school! This is division one men's college basketball we are talking about, playing for one of the most prestigious programs in the country. It's not like he just started playing basketball a few years back. He plays for a great coach, a great University and with great group of teammates. If that doesn't get him motivated to play..... maybe I just don't get it.

Hey Balkan, if you've never played Division I college basketball at a major university I wouldn't be giving advice to Brandon Rush. I'm not saying you can't have your opinion but if you haven't been in his shoes you can't know what it's like.

It must be hard for Brandon. Everyone telling him how great of a player he can be but looking around and seeing 7 great teammates. Something tells me if he played for Mizzou he would average 18 or 19 at least. He would have to. But knowing (or at least thinking) that one more pass would likely result in a better shot at a bucket, he passes up on chances. Especially on chances to drive or create his shot. I don't think he has a lack of confidence as much as a lot of confindence in his teammates. Just my opinion

What you say is true jayhawkman. I never stepped on the court, the football field, or the wrestling mat, nor any other athletic venue at the division one college level. Genetics had a lot to do with that (not too many programs hard up enough for a 5'8" 165 pound linebacker that runs the 40 in 5.3 flat). If you think I am trying to give Rush advice, you are incorrect. Are you telling me that all division one athletes need to get a pep talk from their mom to perform come game day? If this is true, why do college athletic programs need coaches? What I truely believe is that the motivation and desire to perform at one's best comes from within. You can't buy it at a store, drink it from a bottle, nor is it likely that all of a sudden you have it because of a conversation you had with your mother.

hey balhawk, when you wrote:

"This is division one men's college basketball we are talking about..."

I read it with the Dan Hawkins voice when he went on his rant, for some reason I was laughing my a$$ off.

It might seem like Rush's mother got him motivated, but it is easy to do that against Colorado. I want to see Rush do it against good teams when it is needed most.

Lets face it...with the conference season in the home stretch...what we've seen from Rush is what we're going to get.

The only way he can take over a game is if our opponent leaves him open from 3pt land and he has an unconscious night shooting the open jumper.

The reason? He's a poor dribbler who can't go left and can't create his own shot...except when being fed an alley oop from a teammate.

Do I want him on my team? Damn skippy.

Do I expect more than a great jump shooter with unlimited range? Nope.

If he expects to be more than a role player in the NBA...he better hope they have Curly Neal or Marquis Haynes on the coaching staff.

Well if Coach Self can not get through to Brandon about being more aggressive and his magical disappearing acts during games then maybe his mom can.

Amen lance. It's almost like Brandon's mom has been reading our live game threads about him disappearing. He certainly vanished for the full 20 minutes in the 2nd half vs. K-State and for the 1st 10 minutes of the CU game. Considering he's trying to increase his value for the NBA draft it's puzzling.

All he has to do is show up for 6 games in March and April! And don't forget beat K-State March 1!

Yeah, he can definitely fill it up, but does anyone else think that he needs to work on his ballhandling? He's got to work on going hard to his left. He doesn't look like he can lead a fast break in the NBA.

Please refer to leonard's post above. I think you will find the answer to your question.