Kansas guard Brandon Rush catches one across the nose from Texas A&M forward Joseph Jones during the second half of the Jayhawks' 77-71 victory. Rush shrugged off the swipe to score a game-high 28 points in the Big 12 semifinal on Saturday at Sprint Center. 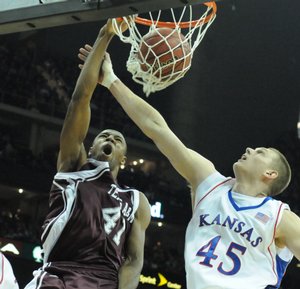 Points by KU's Brandon Rush in the first half

Points by Rush in the second half

Field-goal shooting by the Jayhawks in the first half

Field-goal shooting by the Jayhawks in the second half

But Brandon Rush also was upset - and a little embarrassed - after missing seven of 10 shots and committing four turnovers in Friday's Big 12 tournament quarterfinal victory over Nebraska.

"I played terrible yesterday," Rush said of his nine-point, five-rebound effort in the Sprint Center building located just a few blocks from his Kansas City home.

"I wanted to come out today and show everybody what I can do."

What the 6-foot-6 junior did Saturday in front of a batch of family and friends was score a career-high 28 points - 20 in the second half - of the Jayhawks' pulsating 77-71 semifinal victory over Texas A&M.

Rush hit nine of 13 shots, including five of eight threes, and also was 5-for-5 from the free-throw line. He had just two rebounds, but played strong defense on A&M forward Josh Carter, who bricked eight of 10 shots and scored just five points.

He didn't hesitate when asked if it was the best of his 102 games in a KU jersey.

"I couldn't miss so I kept shooting and shooting, and they kept falling and falling. I'd rather have it in the fieldhouse," he added of his career-best performance. "I didn't play well there at times this year. It feels good to get my career high here, though. It feels good to be in Kansas City and put on a good show."

Rush, who was aggressive in calling for the basketball, sank six of eight shots the second half, including three of five three-pointers.

His two free throws and a three-pointer from his favorite spot - the corner - boosted a 65-63 lead to seven points at 3:53.

"It's the hottest I've ever seen him," said senior guard Russell Robinson, who had one key bucket himself - a driving layup that stretched a 73-71 lead to four points at :31. Rush concluded the scoring with a pair of free throws at 6.4 seconds.

"It's as focused as I've seen him play in a very long time. He knocked down shot after shot, and it wasn't all in one bunch," Robinson added.

KU coach Bill Self, who throughout the course of this and the past two seasons often has had to remind Rush to be aggressive, marveled at the silky-smooth player's effort the second half.

"I thought Brandon was as good today as I've ever seen him," said Self, who ran some plays specifically designed for Rush - the same guy who made just two of nine shots and had three turnovers in last Saturday's 72-55 victory at Texas A&M.

"The thing I'm most proud of ... Brandon didn't play at all yesterday. From him to come back from that I think is a good sign for him. He needs to have some breakout games when it counts the most. Certainly this is one of those type of games."

In adding that Rush (his previous career-high was 24 points three different times) looked like an "NBA guard today," Self said: "If he keeps playing like this or close to it, then I can't imagine this wouldn't be very impressive for a lot of people (scouts) down the road."

Rush nodded in agreement when asked if his performance was one that probably would impress NBA talent evaluators.

"I played good defense, didn't turn it over much (once) slashed to the hole and went to the free-throw line," he said. "I showed I can do more than shoot.

"I'm not worrying about that," he added of NBA talk. "We're trying to win the Big 12 championship, make the Final Four, win a (national) championship."

KU and the Longhorns tied for the Big 12 regular-season crown at 13-3.

"I wanted another shot at Texas so we can really see who is the best team in the league," Rush said.

"We definitely want to win it. We want to give our seniors something special. It'd be my third time to win, too," Rush said.

A victory also might give the winner a No. 1 seed in the NCAA Tournament. Tennessee's loss to Arkansas on Saturday might open a slot for the KU-UT victor.

"Maybe," Rush said. "It'd be good if that happened, too. Right now we just want to win the game, win the championship for our seniors."

Ku is fricken awesome.. Can I say fricken?.... good game Hawks.. This is by far the best time of year.. Rockem Hawks!!!

Now let's see if we can get DA involved in scoring instead of fouling!

He needs to stay. It would be good for Kansas and good for Brandon.

Not that it is a surprise to anyone, but Self's comment about Rush looking like a "NBA guard" says that there is no way Brandon returns for a senior campaign and Self's knows it. (Not that I blame Brandon)

I'm all for Brandon trying to show his stuff to the NBA scouts. He needs to do that for seven more games.

If Brandon stays, there won't be a dry eye in the fieldhouse on Senior night. This kid has committed to the school like nobody since Vaughn. And if he stays, he will probably be a top 5 pick in the draft, which translates to extra millions. Lots of extra millions.

You hear me Brandon?

I wonder if Brandon is going to stick with the stipulation that he has to be a 1st-round pick...right now, a lot of the mock drafts have him going in the 2nd, if at all, this year. Some don't list him until next year.

Rush is not a top 5 pick by any means. I like him and think he will play in the NBA and do ok, but top 5?, please! I agree with KGphoto, he needs to stay. Next year he will be more of the go to guy as the team will not be as good.

Anyone catch Fran asking a NBA scout about Kaun? The NBA scout said he will be in the 'league' longer than anyone on this team. Said he's a perfect back-up center for the NBA.

Everyone obviously wants to see these kids stay, but, like Self, be realistic.

Would love to see Kaun and Jackson make it in the NBA.

jwkfan1625, They said something about that last night and I believe it has happened since 02 (maybe big east) and before that it's been a while.

KGPhoto, I really like Rush, and he sure put on a great show yesterday, but to claim that an extra year at KU will make him a top 5 draft pick is incredible. If anyone else out here thinks Brandon has top 5 draft potential, please speak up and tell me why, because I just don't see it. FYI, in the last 20 years, only 3 Jayhawks were picked in the top 5. That's Manning, LaFrentz, and Gooden. I don't see Brandon adding his name to the list.

Man what a story it has been all year..

D. Jackson played his heart out on the court this year. I give all the props to DJ for sticking with the J crew and hope for the best.

We'll have BEVO BARBECUE tonight, everyone!

Has DA been paid to play bad or to try and throw games? Im a fat old man and could outplay our supposed new star. The kid is downright awful lately!

Hopefully, the boys will feed off the "home" crowd today.

I don't see how KU stays in this game unless Arthur can somehow wake up and pay attention. He is incredibly awful lately! What is his problem?

Like yesterday, DA tends to get into early foul trouble, which makes him play much more tentative. You could see after he got his second one, he pretty much was playing a matador-like defense.

SD surfer fan I thats right ME told all of you on here just a couple of weeks ago, that Kaun would last longer as a pro than rush. so i,m not senile afterall, or a least not alone . lol

I agree. Kaun has improved dramatically each year. He is catching short, quick no look passes this year and then scoring on them. His freshman year, some of these would have hit him in the head. Even last year he wasn't very effective, but this year, he has finally lost the stone casts he had on his hands and he is playing with a little finesse.

I can't really say Rush has improved much from year to year which is why he doesn't even show up in the second round in some up to date Mock Drafts. He has lost what he had last year and what Arthur still has this year - upside. He needs to play out the rest of this season strong or he can forget about a strong showing in the NBA draft. Yesterday didn't hurt his case, that's for sure.

It is really Jackson that has been making his NBA case this year. I can see him being a Reggie Evans type player in the NBA if he keeps working. He seems to be a certain 2nd rounder at this point.

Arthur seems to be a certain first rounder, but he may not be a lottery pick. If he thinks he can improve, he might be better off waiting a year to lock in a lottery pick next year. On the other hand, after seeing what has happened to Rush, he might not want to take his chances. One thing for sure, Arthur will not last long in the NBA if he doesn't play a lot better than he his right now. NBA benches are littered with players a lot better than Arthur is today.

I hate to break it to you speedy, but Kaun is not even going to be on a European team, much less an NBA team. I think a lot of you guys are overlooking all the terrible holes in his game because he is so true to your hearts. Here are just a few things you need to be a good big man in the NBA.

Kaun is a decent shot blocker that is the only thing he has. Don't even make me start on his free throw shooting.

I personally think that Cole should play above Kaun. He has all the ingredients to be really good, just needs more playing time.

Thanks Lebowski! I'm just trying to keep it real with Kaun. He is not NBA material. Stop being a homer and look at it from a scouts point of view. Before you jump all over that, I don't compare myself to an NBA scout.

I thought that opinion on Kaun's success in the NBA WAS from an NBA scout. See SDsurferFan above.

Nobody is saying Kaun will start in the NBA. And there are plenty of NBA teams who do not even field a traditional center these days. But when I look at a low talent, 6-year pro like Stephen Hunter - currently back-up to Marcus Camby for the Denver Nuggets - I think Kaun might have a shot in the NBA.

But then again, I will not be surprised if he doesn't make it either.