Kansas forward Darrell Arthur bangs down low for a bucket over Nebraska forward Chris Balham during the first half Saturday, Jan. 26, 2008 at Allen Fieldhouse. 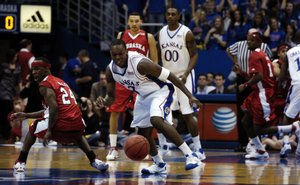 Points scored by Nebraska in the first half

First-half assists on six first-half baskets by the Huskers

Jayhawks with at least one assist in the first half

Points by NU's Aleks Maric, 16.6 below his team-leading average

Assists by the Huskers

Jayhawks with at least five assists each

Total assists by the Jayhawks, on 32 baskets

Brandon Rush insists he doesn't see red when he takes the court against Nebraska's basketball team.

"I've got nothing against Nebraska," Rush, Kansas University's 6-foot-6 junior guard, said, indicating he's as fired up to play the Cornhuskers as any other Big 12 squad.

"I love that corner."

All of Rush's threes Saturday came from the side, which is odd considering that's not his favorite place to launch threes.

"I think the top of the key is easiest to make," Rush said. "I think it's the easiest three in college basketball."

He swished three treys in the first 10 minutes Saturday in helping KU to a 21-7 lead. He had four in five tries at halftime and scored 14 points as KU led, 44-15.

"It's the way we play, too. We get the ball inside, they double-team and we kick it outside," Rush said. "My teammates did a good job finding the open man."

This year's routs were due in large part to the play of Rush.

"Brandon sometimes doesn't show too much emotion. We try to get him the ball and put it in his head early (that he's going to have a good game)," KU sophomore guard Sherron Collins said after scoring 10 points off 4-of-5 shooting in 17 minutes. "Brandon is like our bigs. Once they get going, our team rolls."

Amazingly, the 6-foot-11 Maric, who entered with a 16.6-point scoring average, did not score for the first time since a 74-60 loss to Florida State on Dec. 31 of his sophomore season.

Maric - he was 0-for-6 from the field and 0-for-2 from the line in 21 minutes - has been blanked five times in his career, twice against KU, a team he against which he has averaged just 10 points and 5.5 boards in nine losses.

"We trapped him some when they had two bigs in the game, but for the most part just guarded him," Self said.

Maric had scored 19 versus KU in the first meeting in Lincoln, but six points came late, well after the game had been decided.

"He got off some good looks he'd normally make, but for the most part had limited touches," Self added. "Darnell, Sasha and Cole did great jobs on him. Our perimeter pressure was good enough they didn't get the ball to him very easily."

KU's Jackson grinned when asked if it was a "thrill" to hold Maric without a point.

"Not a thrill. It's our job," he said. "We are supposed to make it tough on other teams' big men."

Noted Arthur: "We tried to keep the ball out of his hands. We threw a lot of guys at him who did a good job on him."

Maric did grab nine rebounds on a day NU was whipped on the boards, 46-39 - 25-19 the first half. Russell Robinson had four of KU's 14 steals as the Jayhawks forced 16 turnovers and held NU to horrific 30 percent shooting - 20.7 the first half.

KU outscored NU, 40-34, the second half - one which frankly didn't even need to be played, the game having been decided in the first 20 minutes. Hapless NU limped into intermission after having converted just one field goal from 7:43 to :09.

"We didn't get off to an unbelievable start offensively, but we did defensively," said Self, whose troops stretched an 8-5 lead to 31-11. "We did a good job on everybody but Harley."

Steve Harley scored 16 points off 6-of-12 shooting and 4-of-6 free throwing, the only Husker in double figures.

The game was such a rout most of the KU postgame interviews centered on Wednesday's game at Kansas State as well as the possibility of KU going undefeated this season.

"I won't think about that until we have zero games left," Jackson said after his latest strong outing that included a career-high five assists. "Before that, you don't even think about running the table. It's one game at a time here."

It has worked so far to the tune of 20 victories, no defeats.

I say Jackson and Chalmers score 40+ combined on wednesday. Rush and Arthur will get guarded heavy and open up the game for everyone else. Also Sherron will have a big game.

I just hope the whole team doesn't come down with Mr. Chalmers' flu.

Where was Chalmers in the NU game? No shots. No steals. Did he take the day off to prepare for K-State?

I also like the idea of wearing the red uniforms Wednesday.

I say surprise KState and show up in black uniforms.

Makes us look like we own the joint, and makes a statement by mocking their "blackout". Everyone at KSU would be surprised that we came in with a chip on our shoulder.