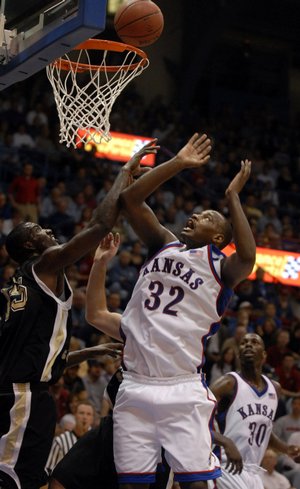 "I didn't know about it (AP honor) at all. I found out at halftime. Coach (Bill Self) told the whole team. He said it's the reason I played the way I played the first half. At halftime, coach was throwing a fit. He just put on the board 'press clippings,' and thought I knew about it....He kicked the board, it was just regular him. Regular Self.

"Coach said it's the reason I played so bad the first half. I told him I hadn't heard about it, (but) I played terrible," Rush added.

Self said Rush, who had seven points and three turnovers the first half (he finished with 12 points and six boards), had a bad half because "he's human."

As far as Rush not knowing he was named All-American, Self believes that is the case.

"Yes, because he's still got his all-Big 12 trophy up in our office. He doesn't care about that stuff," Self said. "He cares about the team. To me, he didn't prepare to play like he normally would."

¢ Bumps, bruises: Mario Chalmers, who sprained a toe on his left foot in last Thursday's game against Washburn, sat out Tuesday's game.

He could have played had it been an important regular-season game, Self indicated.

"We thought he'd be back practicing. He tried a couple of times, but he's not moving well," Self said. "We decided to shut him down a couple of days. If he had to play tonight, he could have. There was no reason. We think he could be fine Thursday, full speed for sure Friday and ready Saturday (for the season opener against Northern Arizona)."

Jeremy Case, who has a pulled groin, is doubtful for the opener. He could be back for Game Two against Oral Roberts on Nov. 15.

As far as Sasha Kaun (knee injury): "He's getting better, on the accelerated path. It's been a week and a half. Hopefully with him it'll be closer to three weeks than six."

¢ Wright doubles up: Julian Wright, who received preseason All-America votes and thus was named honorable mention, had 14 rebounds and 10 points, with five assists, three blocks and two steals in 26 minutes.

¢ Happy birthday: Darnell Jackson celebrated his 21st birthday. "I'm getting old. I think I'm going to grow a beard now," he said. "It's been a great birthday."

¢ This, that: KU has won 26 straight exhibition games and is 11-0 under Self. : KU outrebounded the Hornets, 52-34. : ESU went 10:58 the second half without a field goal. KU in that stretch went on a 27-2 run. : KU had six players in double figures. : Rodrick Stewart had six points and two boards in 16 minutes. He made one of four shots and four of eight free throws. He did a good job defensively on ESU guard DeAndre Townsend the second half. : Matt Kleinmann, who entered early in the first half, had four points and three boards in 12 minutes.