Which was more responsible for Oklahoma State's offensive performance against KU on Saturday? 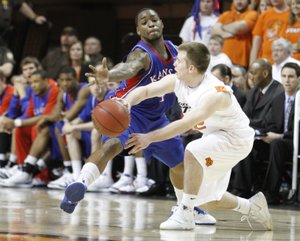 Does it matter to you if Kansas beats North Carolina to 2,000 wins?

No outright title yet

Kansas State’s victory over Missouri in Manhattan kept the Wildcats in contention for a possible tie.

KSU will meet KU at 7 p.m. Wednesday in Allen Fieldhouse.

The fans celebrated the ’Pokes’ eight-point victory over KU by storming the court. Several hundred orange-clad students hoisted sophomore guard Keiton Page on top of their shoulders, giving him a victory ride.

“I was feeling a little claustrophobic. When they picked me up, I caught my breath. I thought I was going to pass out,” Page said with a laugh.

Obviously, it’s been a long time between games versus No. 1 teams at historic Gallagher-Iba.

“I was born in 1989,” OSU standout James Anderson told the Daily Oklahoman before the game.

Anderson, a 6-foot-6 junior from Junction City, Ark., chose the Cowboys over the Jayhawks in recruiting.

He told the Tulsa World that both OSU and KU seemed “like a big family.”

“Not besides the time I was getting recruited,” he said, asked if ever envisioned himself a Jayhawk.

Anderson, by the way, played despite suffering back spasms at practice on Friday.

“Coach (Bill Self) told us at halftime about it. He just said he’s killing us, and he wasn’t even supposed to play,” sophomore Marcus Morris said.

“It’s not a relief at all,” junior Anderson said after exploding for 27 points off 9-of-19 shooting, 4-for-6 from three. “With talent like this, we can play with anybody.”

Self was asked if Anderson reminded him of any other player. Ex-Jayhawk Paul Pierce of the Boston Celtics was the one who came to mind.

NBA-draft.com has Henry headed to Philadelphia with the No. 9 overall pick in the 2010 June draft. Others: nbadraft.net: No, 11, Minnesota; insidehoops.com, No. 12, Chicago; mynbadraft.com, No. 15, Minnesota; draftexpress.com, No. 15, Houston; nbadraftguru, No. 16, Chicago.

Oklahoma State mega booster T. Boone Pickens presented a $100 million check to the university at halftime after the university president announced that the school has started a campaign designed to raise $1 billion.

KU sliced a game-high deficit of 19 with 13 minutes left to six points with over a minute to play. KU trailed by 17 with just over seven minutes left.

If Henry is predicted mid first round, James Anderson is probably a potential first rounder too! Keiton Page , a second rounder?

If Henry is a potential first round pick, I am going to declare myself eligible at age 59. I am quite certain I can take as many bad shots as he can, play better defense, shoot a higher percentage of free throws and block out the player I was guarding.

just what we needed the purple cats to have hope...we should have burst it in stillwater.

Frank has them more afraid of him than the AFH crowd - they will bring his intensity and we will counter with.......spirit of Phog.

Just like old times, KState game for the outright conf. title- love the challenge and the opportunity. Rise up.

Only the sheer stupidity of NBA general managers could put Henry in the NBA next year.

Self needs to play Tyrel Reed more in games like this. He always seems fired up and provides a spark on both ends of the court. That shot over Page fouling him was awesome! Besides a couple threes when the game was all-but-over, that is the only KU highlight I remember.

Henry will eventually be a great pro, however his outside shot would have helped open up the middle vs. OSU. Henry looked lost yesterday. I would like to see Henry consistantly pick up his game vs. B12 talent. Anderson is a great player for OSU and he totally schooled Henry. Henry's time will come with experience but he is not NBA ready.

He's not NBA-ready, but the NBA doesn't care about that in the draft - It's all about POTENTIAL.

I don't think it makes much sense, and I completely agree with everyone else that another year would do him well (see Julian Wright as an example) - BUT I still expect him to declare after this year because chances are he'll be a lottery pick.

He's not ready and i wouldn't be surprised if Cole stays for his last year just to see what if. Next years starting Five Cole Marcus Xfactor Mornigstar. Then you got Bill feeding in off the bench Whitley Reed MK Morris Henrys bro who knows what can happen

ops forgot one Reed would start

Isn't the NBA going on strike next year?

X Henry is not ready for the NBA. Talk about inconsistent. His defense is horrible. Not aggressive enough. Very streaky shooter. What is up with Aldrich? Only played 8 minutes in the 2nd half. I have been a Jayhawk fan for 65 years. I expect more out of these talented players.

kubirdfan75 et al, first off, Brady & Tyrel won't start most games next year. Don't get me wrong, I like Brady & Tyrel. Obviously they are very good players or they would not be on the court with the Jayhawk on it. That being said, to win a national championship, this team needs Tyshawn to step up his all around game. I mean 3 points out of the Kansas Kids v. OSU? Come on, they at least need SOME offensive output from those positions and the OSU game partly proved it. Sherron can't win games by himself and, I agree with most everyone else that X's game is not nearly where it needs to be.......sooooo, they have to have clutch shots by someone else. To me, that is not Brady & Tyrel. Again, to win a national championship, I envision a repeat of the 2008 tournament only with Tyshawn playing the part of Mario this time.

Any professional BB team that drafts Henry at this point in his career will be making a big mistake. He is great against mediocre competition which doesn't exist in the NBA. He seems to disappear against top flight players.

I root for Henry, but he is going to have to get used to sitting on the bench for years when he leaves after this year. He has a lot to learn.

What happened to the high low game? The power game disappeared.

After looking at the stats, I really like what ralster has to say about OSU's 60% FG percentage. Listen, if it takes a team nailing over 50% from 3, and over 60% overall to beat Kansas by a mere 8 points, I say "OSU, you deserved the win, congrats on possibly clinching an at large bid to the tourney, and have a nice day". OSU had way too much to play for and, as Coach Ford said about his team, 7 of his players had the game of their lives. This doesn't happen often, this isn't a likely scenario. Did Kansas play well? absolutely not... their free throw shooting was bad, they had more TO's than assists, they had AWFUL rotation on defense, and they flat out failed to come out ready to play. But the way they fought back with 13 minutes to play was unbelievable. I'm very proud of those final 13 minutes, I think Tyshawn got fouled on his drive to the basket with 41 seconds left that could've cut the lead to 4 had he made it and hit the free throw, that Page kid must be on steroids to hit 3 pointers from the hash mark, being as short as he is, and remember this...

I really liked what I saw out of this team on Saturday. Up here in Omaha we were only able to watch the 2nd half, had to endure Creighton v Bradley during the 1st half, so I obviously only saw the good things. But if you can get killed in a half, lose a game and still get things turned around in the same game I think it's a big plus. This team was playing like they expected to win with 45 seconds left in the game. Showed some great resilience.

that wasn't even a game !that was boring . that was like watching st marys of the blind vs the short bus express