Jayhawks get familiar foe in next round: Illinois

Kansas defeated Boston University in the second round of the 2011 NCAA Tournament on Friday, March 18, 2011 at BOK Center in Tulsa, Okla. 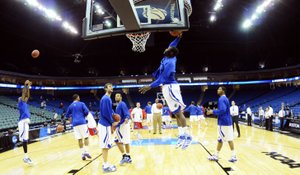 Kansas coach Bill Self talks to reporters following the Jayhawks' 72-53 victory over Boston on March 18, 2011.

Kansas University forward Markieff Morris didn’t hesitate to hoist up an NBA-range three-pointer during the second half of KU’s 72-53 victory over Boston.

The long three, which pushed the lead to 58-43 with 7:35 left, forced a Boston timeout and also prompted some celebration from Markieff.

“It cracked them,” KU forward Marcus Morris said. “Once he made that, it was over. I knew it was over. He did his little finger wave to the crowd.”

The finger wave, Marcus explained, is the twirling motion Markieff made with his index finger after the shot, similar to an official resetting the shot clock.

KU coach Bill Self had a little fun with Markieff at the postgame news conference when the KU junior was asked about his three from the top of the key.

“It wasn’t at the top of the key, either,” Self said. “It was a little deeper than that.”

Markieff continued: “That’s my shot, and coach let me shoot it. Yeah, it was open, and it was the right time to shoot it.”

With the three-pointer, Markieff is now 23-for-55 (41.8 percent) from three-point range this year.

Markieff, who scored 12 of his 15 points in the second half, said Self has become accustomed to the threes he takes.

Marcus said early in the year, Self had told the twins that he was going to live and die with them this year.

That means both forwards have longer leashes from their coach.

Marcus said he plays better with the additional freedom.

If the Morris brothers wanna have one helluva parade.....

Then we'll all have one helluva parade.

It all goes through the twins....

We just all need to feel spicy....

"Yeah, it was open, and it was the right time to shoot it.”

Couldn't be more true. After the two quick threes right before this, it was everything to gain and nothing to lose. Absolutely broke the thing open. I want to go back and watch the tape and see how many seconds ran off the clock during that 9 point run. Has to be under a minute. Seemed like 10 seconds. Way to go!!!!!!