KU coach Bill Self gets milestone victory No. 400

Kansas head coach Bill Self accepts a basketball presented by athletic director Lew Perkins in commemoration of his 400th career win, which came with a 73-59 win over Iowa State Saturday, Feb. 13, 2010 at Allen Fieldhouse.

Kansas basketball coach Bill Self addresses the media after the Jayhawks' 73-59 victory against Iowa State on Feb. 13.

Which player were you most encouraged by in KU's 73-59 victory over Iowa State? 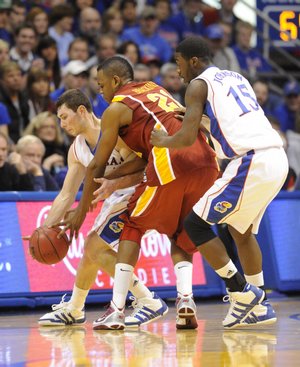 One player appeared more animated than most in congratulating Self following the 400th victory of his 17-year career.

“That wasn’t really much of a celebration,” Self said, his eyes brightening as he entered into one of the patented postgame stories that show his sense of humor.

“Brady was the ringleader, saying, ‘Great job (coach). Great job.’ I told him no thanks to him,” Self cracked after an off night by Morningstar (two points, 0-of-4 from three-point range).

“He was trying to make a big deal of something so I wouldn’t get on his butt in the locker room. It is nice to have coached as many good players as we have. If you coach long enough, you should win some games. We’ve kind of won at an accelerated rate lately in large part because we’ve had such good players,” Self added after the No. 1-ranked Jayhawks improved to 24-1 overall and 10-0 in league play.

It took just one significant KU run to make this a happy occasion.

“I mean, it just came to me. I was in the right place at the right time. I guess it was miscommunication between their two guards,” Taylor said in explaining the steal. “It fell right in my hands. I’m glad I made that layup. I needed it ’cause I hadn’t done anything yet. I think that started a good run for us.”

Taylor finished with all seven of his points in the game-breaking 21-3 surge. His strong performance came on a night when he needed one. The sophomore guard has had a heavy heart of late following the death of his great uncle.

Taylor flew to New Jersey for the funeral Thursday and flew back to Lawrence on Friday.

Of Taylor, Self said: “He’s been a mystery to us. I don’t mean that in a negative way. He’s got so much talent, but he played like he was going half-speed out there in the first half. We challenged him at halftime. We told him we’re not going to play him any more unless he plays like he’s capable of playing. He pushed the ball and put pressure on the defense in the second half, and all of a sudden got confidence and played well.”

Coincidentally, that 14-0 run started immediately after a timeout in which Self reminded his troops that this was a similar situation to the last home game against Nebraska, in which KU trailed five minutes into the second half before busting that game open.

“It’s coach Self on the sideline. He’s a great motivator,” Collins said of the reason for the surge. “When he gets on you, he tells us what we need to know and what we can’t do, to make us better.”

What triggered the run?

“Defense,” Collins said. “We went on that run, and it started with defense.”

Self noted: “Our first-shot defense was pretty good. That 14-0 run was started by Tyshawn, Tyrel, Xavier and the twins. It was our best lineup tonight, in that stretch. That certainly put the game away.”

And it made possible the brief postgame ceremony in which Self earned his milestone memento.

KU will travel to Texas A&M for Big Monday. Tipoff is 8 p.m. in Reed Arena in College Station.

Congrats Coach! You make us proud.

Looking forward to watching the NEXT 400.....in the Crimson and Blue.

Congratulations on the victory, but I wonder why, when you have a comfortable lead with two minutes to go, the subs aren't in the game? There is a difficult game to play on Monday and the team looked tired--just the spot for injuries to happen. Plus, some of the players who work hard in practice deserve a chance to play. If the lead goes under 10, you can always put the first team back in.

lincase- Wow, coach gets victory 400 and you second guess him on how he coached the game. I think coach knows what he is doing.

Congrats Coach Self on the milestone, and here is to the next 400!

Congratulations on the victory, but I wonder why, when you have a comfortable lead with two minutes to go, the subs aren't in the game? There is a difficult game to play on Monday and the team looked tired--just the spot for injuries to happen. Plus, some of the players who work hard in practice deserve a chance to play. If the lead goes under 10, you can always put the first team back in.

It's really not that big of deal with the starters being in at the end of the game. A minute or two difference here and there isn't going to do anything. The hawks have a day off today, technically. If there was a back to back game than I would have been a little more concerned, but it really isn't that big of deal. A lot can happen in 2 or 3 minutes. Better to solidify the win.

lincase: Iowa state was playing real hard and were dropping 3s. You never want to take a chance to get the lead go down below 10 with less than 1 minute to go. Momentum can change in a heart beat and if you start to miss the free throws? Yeah we would have liked to see the subs but under the game circumstances it was the right call by the coach.

Now let's go get the next milestone, win 2k. Nice work HCBS, you are very deserving.

I think Sherron gets to stay on that court as long as he wants these last four (now 3) home games...

Congrats coach- I was so darn nervous when Roy left. I honestly didn't think he could be replaced....I complained for days. I don't think I have ever been happier to have been proven wrong. Now you've raised the bar even higher. Thanks for your dedication to this great game, and to Kansas Basketball.

Your thoughts are exactly my thoughts! I didn't think at all Roy could be replaced. There had been several articles on North Carolina tanking and Roy's comments on Haiti, that it just kind of reminded me that we have the best coach in America in Bill Self. We got the better end of the deal. Congrats on winning 400, Coach Self! Good luck with A&M!! Rock Chalk!!!

I agree with lincase. ISU pulled Brackins with 2 minutes left in the game. They essentially waved the white flag because they had their full time out left and could have used it if they wanted to give him a rest but keep attacking. We could have done likewise. I think the argument for getting the guys at the end of the bench in for a little bit to give them the chance to play in a game is the biggest reason to sub. I know it doesn't seem like a few extra minutes would save legs, but the extra rest for the big minutes guys is a bonus.

Also, the guys aren't off today. They have one day to get ready for A&M, so they are practicing and probably using a full three hours to go over A&M sets as well as continue to polish our own stuff. Then they have to travel which is fairly draining as well.

Congrats, Coach! I'm proud that I was able to be there when you achieved this milestone! My brother and his family were there too...my 6 year old nephew's first game in Allen Fieldhouse. "This is WAY better than on TV!!" He was making noise on defense, and rock-chalking at the end...it was hilarious!

Maybe he is using it as preparation for NCAA tournament in case have close games both sessions of a weekend, will have to play full game and then another two days later. Only time we get to simulate that during the season is a Saturday/Big Monday schedule. Hopefully won't happen on 1st weekend, but if going to NC game, then will most likely will happen Sweet 16 and/or NC weekend.

Speaking of Roy, seeing how is team is doing this season is a reminder of why I am happy we have Self now and not Roy Williams.

I'm sure that this season at UNC is just one of those where the talent just did not meet the hype, and future seasons will be better for him, but I have to say that Self has proven to be someone who can handle the pressure even during "off" years.

I am happy for the contribution that Roy Williams made to Kansas basketball, but now I would never trade Self to get Roy back. Self clearly is a perfect fit for this club.

Congrats Coach. Wish you many more.

Also wish it hadn't been on ESPNU so I could have watched the game.

I love that Coach Self continues to evolve as a Coach. A few years ago that was a game we would have lost, and worse yet, would have been a precursor to what a team who stays close can do to us in the NCAA tourney.

Not anymore. Glad we hang our hat on Dfense & offensive efficiency, but sometimes the tempo of the game just needs to be altered by getting into the opponents head.

Even if we didn't go on that 14-0 run, we still win that game simply because Self freed his team for a few minutes with the full court press "attitude"...

Make Iowa State go faster than they want (or planned for).

Now their "perfect game" better have a plan B...

Lots of teams in the NCAA that can do one thing well....

ESPNU has the cheesiest commercials in America and they must run the same five or six spots twenty times a game,,,it's better than the Super Bowl!!

The clothes hanger/closet expander system, the dancing waitress turned coed and my favorite, the missle-shooting remote control helicopters are awesome [awesomely bad, that is].

They reminded me of local late-night, home-made commercials shown at 2:00 in the morning. Still, it's a small price to pay to be able to watch the Hawks in action.

When you are Number One, every game is a trap game.

KU is caught in a scheduling anomoly in that it's a down team on Saturdays[@ Colorado, Nebraska, Iowa State, Colorado] with Big Mondays in between [@Texas, @Texas A&M, Oklahoma} followed up with final three games in seven days [@OSU, KSU. @MU}

This is a daunting schedule that will be difficult to navigate unscathed but it will be great prep for the Big Show!!

KGPhoto The facebook link looks like a bunch of junior high kids telling each other they and their team sucks.

not_Important: You didn't see the "Technically" part did you? You also didn't play college ball did you? Good Grief! Yes the team is still going to meet today to go over the scouting report and run some sets and what not, but they aren't going to go through a full blown practice. That's not what you do this time of year with a basketball team especially with one day between games. Relax!

This is Tyshawns only chance to ever be head and shoulders above anybody!!