Kansas guard Tyshawn Taylor is fouled fighting for a loose ball with Duke guard Austin Rivers during the first half Wednesday, Nov. 23, 2011 at the Lahaina Civic Center. 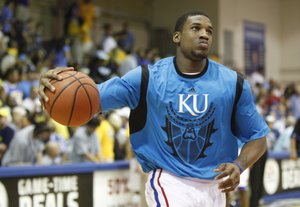 KU coach Bill Self, Thomas Robinson and Jeff Withey talk in the postgame press conference following the Jayhawks' 68-61 loss to Duke on Nov. 23, 2011.

• Keegan: This one sure felt meaningful

“You hate to call it a big game in November, but it is a big game. The atmosphere is out the roof. It’s as good an atmosphere as you can play in, because you can feel the crowd. They are actually a part of it,” Odom said.

“In a battle of the preseason, it’s going to be the best. You have the crowd, motivation on both sides trying to get out of here unscathed.”

Of course, one team was destined to lose in the 28th-annual title game.

“This is the kind of game that helps you grow no matter what,” Odom said. “They’ll both be on a plane tomorrow and learn from it no matter the outcome. It won’t stay with either one of ’em too long. They’ll move on. They are not where they want to be in April at this time, but they both have Final Four potential.”

As far as a scouting report on both teams ... “I think Kansas is one of the few teams in the country with visible size at the guard positions and at the post position to play Duke man-up,” Odom said before the game. “The key for Kansas is, can they play effectively at the eight and nine slots? They’ve got seven. Duke can go eight or nine no problem.”

Former KU guard Mario Chalmers of the Miami Heat had this to say on Twitter before the game: “Had a conversation wit EJ. Look for him to ball out tonight as well as my youngin Ty and trob.”

Chalmers, by the way, will host a charity exhibition game on Dec. 1 at Sullivan Arena in Chalmers’ hometown of Anchorage, Alaska. Also playing in the game will be former KU players Marcus and Markieff Morris, Cole Aldrich, Julian Wright and Brandon Rush. The game will benefit both Alaska Hoops, Inc., and the Mario V. Chalmers Foundation.

Former KU guard Brady Morningstar has made the season-opening roster for the Tulsa 66ers of the NBA Development League. The Tulsa 66ers is the official minor-league team of the NBA’s Oklahoma City Thunder.

Former Free State High standout Morningstar was drafted by Tulsa on Nov. 3 and reported to training camp on Nov. 12. The 6-foot-4, 185-pounder was the 34th-overall selection in the NBADL draft. Coached by Nate Tibbetts, Tulsa officially opens the season Friday at Idaho.

Tennessee’s media-relations department came up with an interesting stat regarding college coaching staffs. The Vols’ staff of Cuonzo Martin, Tracy Webster, Jon Harris and Kent Williams is the top scoring coaching staff in NCAA Div. I. Those players scored 5,381 points. Kansas’ staff of Bill Self, Danny Manning, Kurtis Townsend and Joe Dooley is fifth at 3,805 points scored in their careers. Manning accounted for 2,951 of the KU points.

“The key for Kansas is, can they play effectively at the eight and nine slots? They’ve got seven. Duke can go eight or nine no problem.”

Give me a break with this, 'KU's good but not deep' talk. Every TV analyst says it every game. Depth is a good thing to have, but plenty of teams make it really far playing only 7 or 8 guys.

If you have 8-9 players everyone worries about chemistry. I also like the wrong line-up theories, with that many good players. Who is the team leader with so many studs on the roster? If you pass the ball too well you are no longer unselfish, but rather lack aggression.
If your team is all white you have no athletes. You can't make it to the championship game without 5 star athletes/ McDonald's All-Americans. Personally, I prefer a 7 man rotation of quality players who fill rolls. A couple stars offensively and defensively. A glue guy or two and a long range bomber.

Agree somewhat. But, it's the quality dropoff after the starters which so dramatically effects KU this year. How effective has KU's bench really been during the quality games they've played? Some on this board have even questioned one or two of KU's starters (ie. Withey and Releford).

Having just watched the Duke vs KU game, I think the starters are beginning to meld together into a solid defensive team. And, with only a few exceptions, I was proud of the way all five performed on both ends of the court during the Maui trip. Withey and Releford both performed very well defensively against Duke. The next 3 or 4 off KU's bench have demonstrated that they are capable, but not on a consistent basis. They spell the starters, but they aren't contributing enough so that Coach Self can rely on them like he has in previous years. If they can just get some more game time (against less capable opponents), hopefully they'll start to gel, too. The Duke game illustrated quite dramatically that KU can use more help off the bench.

Couldn't agree more about your assessment of Taylor. How has he improved each year? His turnovers to me just seem, well, dumb. Dumb or not focused. He's a senior, a "finished" product at this point. Guess you have to take the sour with the sweet.

I have always been a big fan of TT,and I was really expecting great play from him this year. However, after last night's championship game, I have come to conclusion that KU will be better off with EJ being the point guard. TT just can't contol himself in Big games, 11 turnovers is unacceptable from senior leader.

I felt offense ran much smoothly in previous games with EJ at point. HCBS should try this move now rather than Feb/Mar.

I still believe TT is a very good player but he can't be counted on to be team leader.

I also agree that KU appeared gassed in final 2-3 mins. We need good production from bench in big games so HCBS can give little more rest to starters

Never mind the 8 and 9 slots; we had nothing at 6. The sole "contribution" of our bench was fouls and turnovers.