Raimond Pendleton fielded the punt and moved into a clearing and ran as fast as he could. At the last instant, he slowed down to execute a horizontal leap into the end zone. KU coach Mark Mangino then removed his headset and sprinted as fast as he could down the sideline, and it wasn't to congratulate the sophomore receiver out of Garland, Texas.

Mangino grabbed Pendleton so hard by the jersey that his shoulder pad popped out. The coach gave the player an impassioned tongue-lashing and in the process somehow bloodied his own face.

"He told me it's not all about me," Pendleton said. "It's about my teammates. Celebrate with my teammates, not by myself."

Was the tongue-lashing, the likes of which Pendleton said he never quite had experienced, out of line?

"I probably deserved it a little bit," said Pendleton, who received a 15-yard penalty for the showboat move. "It was well deserved. I learned from it. It wasn't out of hate. I understood that."

Will he do it again?

"No sir," Pendleton said, leaving no room for doubt.

Later, Pendleton was on the receiving end of a Kerry Meier touchdown pass.

"I celebrated with my teammates," he said.

Asked to name the last time he scored two touchdowns in a game, Pendleton said it was when he was playing for South Garland against rival Garland.

Did he dive into the end zone on that punt return?

"No," he said and was able to laugh at the question.

After the game, Mangino talked about his tirade with gentle tones.

"Raimond made a great play," Mangino said. "We were really excited for him. He's a guy we're counting on to make big plays. I was disappointed, and I told him he got that touchdown because 10 other guys were blocking for him, not because he did it himself. We just don't go for that stuff here. Hot-dogging, that's not what we do here at KU. We play hard. We play with class. He's a young guy. He made a young mistake. I'm not going to hold it against him. He won't do it again." 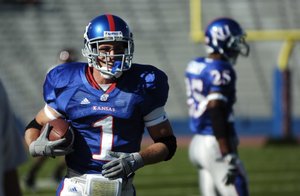 ¢ Kansas led 35-0 at halftime on Saturday. The last time the Jayhawks shut out their opponent in the first half, a horrible second half ensued: Kansas was up 17-0 on Oklahoma State but ended up losing, 42-32, last season.

¢ The announced attendance was 46,815, marking the largest season-opening crowd at Memorial Stadium since 1994. That day, 48,100 watched Kansas beat Michigan State.

¢ Marcus Henry probably had the day's most acrobatic play. At the end of the first quarter, the KU senior had a lob pass thrown to him in coverage. Henry jumped over CMU's Eric Fraser, and the ball bonked off Fraser's shoulder pad and went into the air. Henry then made the catch as he was falling to the turf for a 21-yard gain. Henry ended up leading all receivers with 103 yards on seven catches.

¢ Kickoffs were moved back to the 30-yard line this year in an effort to keep the clock moving and to limit touchbacks. It worked Saturday, with strong-legged Scott Webb only managing three touchbacks in nine kickoffs.

¢ Before the fourth quarter, Kansas advertised the KU-Missouri game being moved to Arrowhead Stadium in Kansas City, Mo., over the public-address system. A noticeable chorus of boos followed.