For the first time since 1989, the Kansas football team is victorious in Manhattan. On Saturday, KU defeated rival K-State 30-24. 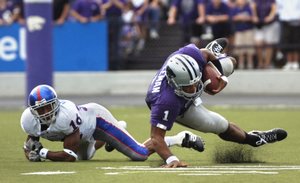 Manhattan — The South wind huffed and it puffed and it blew Todd Reesing's weakly delivered first pass down. Kansas State's Chris Carney intercepted it. A crowd of 50,924 threw a purple party in Bill Snyder Family Stadium.

These were new circumstances for Kansas University's sophomore quarterback working his first road start. Throwing into the wind the first quarter, Reesing completed just three of nine for 13 yards and an interception against a defense bigger and faster and meaner than any he had faced.

And then, just as he had in the opening four weeks, Reesing played three brilliant quarters, appearing in the fourth quarter for the first time all season.

He adjusted to the wind, the defense and the crowd in leading Kansas to a 30-24 victory.

Again, Reesing showed he's such a clever athlete, blessed with a quick brain, feet and release. His contagious confidence spreads a calmness across the sideline, even when the numbers aren't adding up. At various points, the scoreboard showed Kansas State leading 7-0, 14-7, 24-21. Reesing's body language never read like a quarterback whose team had fallen behind, even after his second of three interceptions, when coach Mark Mangino was urging him to "relax, don't get too wired," according to Reesing, a natural leader who so firmly believes in himself.

What, Reesing was asked after rallying his team to victory, would it take to shake his confidence?

"I don't think that can happen," he said, so matter-of-factly. "We faced some adversity today. I threw those interceptions in the first half. ... The offense had confidence in me, and I had confidence in myself, and we bounced back. ... You've got to face the adversity, and you can't let it get you down."

Marcus Henry dropped a pass in the first half, Dezmon Briscoe in the second. Kansas scored touchdowns on both drives, Briscoe scoring on the same drive in which he dropped one. Dexton Fields had one bounce off of his helmet in the fourth quarter for an interception and rebounded to score the winning touchdown.

The drops don't send Reesing's eyes rolling back in his head. They don't make his finger point. They make his mouth move with words of leadership: "I just tell them, 'Don't worry about it. Get the next one.' Or, I'll joke with them: 'You owe me one.' I think it's good a lot of times after a guy drops a pass to come back to him and let him make up for it. They're going to be focused, and they're going to be ready because they know they let the team down, and they want to make up for what they did."

Over the final three quarters, Reesing completed 19 of 26 for 254 yards and three touchdowns. Anyone surprised he was able to take his talents on the road against stiffer competition and succeed wasn't paying attention to what he did against the pushovers on the schedule. He has small hands, which could be a factor in his passes having a little wobble to them. His accuracy and pocket presence equip him for the big-time, which is where his team belongs.

Sparky has the right attitude. He's just what KU needs. Finally we have some winners on this team that seem to refuse to lose and play all 4 quarters. Which was kind of a change since most starters haven't played 4 quarters all year, but those games were against cupcakes right. Guess we can quit asking the question is KU any good. It's more of a question now how good can we get? Rock Chalk

I think that the strength and conditioning coach we have played a big part in this season so far! We have not had any major injuries, and we were playing hard through the fourth quarter on a warm, windy day! Coach M, give Chris Dawson a raise! Turn it on, turn it up, and turn it loose!!!

Great job, Tom. Like you, I am wondering what the "polls" will do now. I am somewhat unsure because there are "cupcake heads" (read Lee Corso and others, please) trying to give their "two cents worth". By the way Mr. Corso, if you haven't checked, look at the Stanford-USC score. Those Stanford "cupcakes" were a 41 point underdog playing on the road. Go Hawks, now let's get Baylor at the Stadium!!!

Mangino, spread the money around and KEEP THAT STAFF. You have extremely good performance in all facets of the game. Keep them, and include Dawson as well!

A year ago, some fans were worried abut the defense. Many thought you needed a good Defensive Coordinator. You went for the new Offensive Coordinator instead, and thankfully got the right man for that job. The defensive thing sort of went subrosa. The linebacker coach moved on and you picked a replacement for him. The guy you hired was from Dawson's staff. JW gave him a very nice write up last summer. Played very well at linebacker in Ohio State U and went on to an excellent linebacker in the pros. Unfortunately, Ohio devotes very little TV time to Big XII and specifically, Kansas. Radio is good ( use your computer on laser.com, push the live radio button), but you can't tell what your defensive backs are learning from the new coach.

Ohio State played Purdue last night, the team with similar experience with our preseason opponents. Purdue couldn't play with OSU. The OSU backs are watching the 5 potential receivers and covering them. When Purdue holds the running back for protection, if he isn't busy he goes short thru the line. Last night he was killed. The middle line backer didn't always get there in time to prevent the reception, but the receiver never got a chance to turn around; he was laid right in his tracks where he caught the ball. The TV announcer, Hiebriet (sp?) was an OSU quarterback; he was quoted saying, at the end of the game, "Don't use the Cover Two." They didn't. The only 'mistakes' the defensive secondary made was when they were confronted with the problem of covering one and a half to two receivers, because one secondary was sent for the blitz. Purdue never got more than a first and ten for it. With that kind of defense, I would guess that our coach is teaching OSU secondary defense. Congratulations, Coach, and Thank You!!!

As for Mangino, give that man a BIG raise. Make him so expensive that no one but the rich guys can come in and offer him a Defensive Coordinator's job. He is at the right place for us! Keep him there.

Why would he want a defensive coordinator job? He is a top 25 head coach.

The best thing about this team is Sparky. He's a leader.

A smart KU quarterback? Who knew?

I love this kids poise. I know it's a ways off but we are going to regret burning his redshirt last year.

The best thing about Reesing is that he is a quarterback. His leadership skills are obviously a big reason why the team is rolling this year, but look at the senior leadership we also have on this team; B. Mac, Marcus Henry, Derek Fine, Cesar Rodriguez, James McClinton, and also Talib and Herford and many others. But because we actually have a quarterback who is a strong leader it makes the offense just as good as the defense and brings everything together

i agree it would be nice if he was only a RS Fr., but I dont think we will hsve too much trouble recruiting QB's in this system, especially if we keep putting up big numbers, and more importantly: winning

Since I live in Omaha, I hadn't had a chance to see Reesing play this year. I'm impressed with his poise and confidence. I can't wait to see the Jayhawks in person this weekend! Rock Chalk!!

And plasticJHawk, just FYI, Talib is a junior.

Talib may be a junior but that doesn't mean much. It's hard to imagine that he won't be gone after this year.

What a joy it was to finally get to watch this team on TV. Even with all of the frustrating mistakes, they faced a very tough situation on the road and overcame it with no problem whatsoever. Reesing looks like the real deal, and I can't wait to see what he and the rest of the team do the rest of the year!