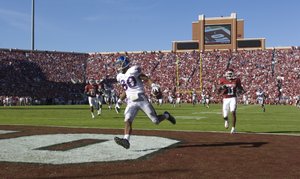 Norman, Okla. — Pine trees line the practice field at Oklahoma, just as they do at Kansas University. Sooners coach Bob Stoops and KU coach Mark Mangino worked on the same staff at Kansas State under Bill Snyder, who made CIA agents seem loose-lipped by comparison.

Given that, naturally, as the Oklahoma defense took the field Saturday for pregame warmups, 6-foot-3, 230-pound senior safety Nic Harris took the field with the secondary, same as usual. Little did anyone in the stadium, from the fans in the stands to the opposing coaches know that Harris would be playing Saturday's game against Kansas from the middle linebacker position, filling in for injured Ryan Reynolds.

"I didn't feel it was to our advantage to let them know what we we're doing," Stoops said. "You can figure out on your own. I'm not too worried about making sure everybody knows."

Oklahoma defensive coordinator Brent Venables was more specific on why the position switch was kept secret.

"The only reason was because we wanted KU to think there would be some opportunities there (in the middle of the defense)," Venables said." It wasn't until Thursday that we said (in-house) this is going to work."

Stoops appreciated the effort from Harris.

"It's tough," Stoops said. "Everyone thinks you just line up in there and go play ball. But the offenses don't let you do that. The reads, all the formations, where's my support coming from? And then it all changes because of the shifting that goes on (offensively). It's fairly complicated. You have to worry about your reads, worry about your coverages."

"You know, they say talent is about 10 percent ability and 90 percent mental," Harris said. "Well, today it was about 99 percent mental. There is a lot you have to know and a lot that is going on, and right now, I have a headache, but I was just happy we came out with the win."

OU also overcame an elbow injury to Manuel Johnson, who left the game in the first quarter and didn't return.

Even without one of his favorite targets, OU quarterback Sam Bradford enhanced his Heisman Trophy candidacy by throwing for three touchdowns and a school-record 468 yards without being intercepted or sacked.

"Sam had a huge day, an incredible day," Stoops said. "It's on rare occasions that he makes a mistake. ... Sam's just so accurate and consistent."

KU has put Resby in at MLB a few times... similar reasoning. You have to change your mindset against all the spread offenses. I'd expect KU will have some new looks on D next week to try to slow TT's passing attack.

Don't count on the new looks against TT, Bowen is in over his head.