On a night when Kansas put up 62 points against Southeastern Louisiana it's the KU defense that was the real story.

A look at how the construction at Memorial Stadium affects tailgating and the gameday experience. 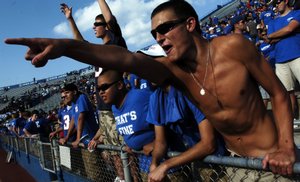 In all aspects, Saturday's snoozer at Memorial Stadium just wasn't a fair fight.

That was symbolized countless times in Kansas University's 62-0 football victory over Southeastern Louisiana.

The Jayhawks' defensive line often would explode at the snap, toss the Lions' offensive big boys aside and swarm to the football. Chaos ensued.

It was a striking, recurring theme of domination by the home team. The five quarterback hurries and four sacks recorded just don't do it justice.

But other statistics might: KU's 20 tackles for a loss, Southeastern's minus-31 rushing yards, and - of course - the Jayhawks' first shutout since 2000 and fourth-biggest blowout in school history.

Simply put, it was a defensive slaughter against a team that just didn't match up athletically. A shutout was a fitting reward for KU's superiority.

"We did want that shutout," cornerback Aqib Talib said. "It's good momentum for going into next week for the defense. We needed that."

Kansas (2-0) was expected to make it look easy. Southeastern (0-2) has lost 15 of its last 18 and brought a young team to Lawrence bound to be overpowered.

The Jayhawks have outscored their opponents 114-7 so far, so that'd be an accurate assessment.

Saturday, the Kansas defense looked crisper than its offense, though the 62 points are nothing to sneeze at.

Quarterback Todd Reesing had 257 yards passing and two touchdowns, and Marcus Henry continued to shine at receiver with five catches for 119 yards. For the second straight week, KU had no turnovers.

But Reesing was the first to admit that he wasn't as accurate Saturday, as his 13-of-23 passing would attest.

"Quite a few blitzes tonight," Reesing said. "It seemed like it was every play. I don't know if it actually was, but if not it was pretty close."

That was the Lions' path to attempt a miracle, and Mangino said so many different looks were shown so many times, Southeastern eventually had to recycle and use blitzes over and over again.

The scoreboard didn't reflect it, but it was a defensive look that Kansas learned from.

"We started off kind of slow getting used to what they were doing blitzing-wise," Reesing said. "It took awhile to get adjusted to, but once we did, I think we settled down."

That led to a balanced offensive effort. Kansas compiled 280 yards passing and 221 rushing, led by Brandon McAnderson's 60 yards on 11 carries.

McAnderson had two rushing scores, too, one of six different Jayhawks to cross the goal line. In addition, KU recorded two safeties and added a 33-yard field goal by Scott Webb in the second half.

A 29-0 halftime lead sprouted to 48-0 after three quarters. With KU's second-team offense and defense playing the entire fourth quarter, the Jayhawks still outscored the Lions 14-0.

Mangino said he likes the progression of his team to this point, with Toledo coming to town next weekend.

"They say you make your most progress form game one to game two. I don't know about that," Mangino said. "Good football teams get better every week."

If Kansas is one of those good football teams, it could be a good football season in Lawrence. For now, the players' chins are cocked a little higher, knowing that two victories toward bowl-eligibility were accomplished without much of a sweat.

"After the game, all the guys are smiling and having a great time," Reesing said. "Winning the game is awesome. Winning big is even better."

221Rushing yards by the Jayhawks

-31Rushing yards by the Lions (yes, that's a minus)

2Punts by the Jayhawks (on their first two possessions)

I understand the Athletic Dept. is trying to get Lawrence, Overland Park and Shawnee-Mission High Schools on next years football schedule.

Hey fjayhawk, what we are doing is rebuilding a football program! We don't need to start off the season with big name schools. We will get tested plenty in big 12 play. It worked well for KSU when they were getting going a few years ago. You eventually have to get some bigger schools, but for now just win.

that would some trick fljayhawk since Overland Park doesn't have their own school district ... did you mean Blue Valley?

Not sure where you were going with that comment ...

The KU schedule could be better, and I'm sure in coming years it will be if the Powers That Be are serious about the department!

Would you rather us play 4 ranked foes and not win those games-lose the confidence on how to win and also not get a bowl bid(which DOES help recruiting). You obviously have some issues.. You take baby steps when your talent level is down etc.

We play at South Florida don't we next year?

To all of you guys who think we are scheduling too many weak teams - you are absolutely right! K-State did it the wrong way. Only one conference title? Zero national title appearances? Fools. Why schedule teams you can beat? You should be scheduling as many teams that will kick your ass as possible. Bring in USC, LSU and Ohio State! That's how you turn around a program, right? Mangino is making a HUGE mistake by scheduling teams he can beat. What an idiot. He should have listened to you guys! Oh, how I long for the good old Terry Allen days.

Just think, if we had Terry Allen right now, we could be scrambling to get one win before conference play gets going! Instead we are 2-0. What is Mangino doing?

So who's next--Little Sisters of the Poor?

I'm stumped that people are still finding things to gripe about after two great weekends of football games ...

AND you all call me a hypocrite for my criticism of Coach Self and the basketball team?!?

Get off the band wagon right now and go root for the Chefs, who look horrible ...

I'm not nearly as afraid of the Purple Kitties now that Auburn lost to USF (whom Kansas BEAT last season) let's all just simmer down now now and wait and see!!!

I'd rather have a confident 4-0 team than a scared 0-4 team. Strength of schedule doesn't bother me a bit as long as we perform well in conference play.

Yeah, these guys all play relatively easy pre-conference games. If you've followed college football for more than just a couple of years, you know this type of scheduling is normal. Even "big-game" matchups are between big-program, big-name schools that can afford to risk a loss without 1) destoying team morale, and, 2) without destroying their opportunities for bowl games and poll rankings.

I have no problem with this kind of schedule. As many have said, Mangino is building right now. Where I had a problem with KSU and other teams is keeping this type of schedule even after they were established. Even though those teams listed played weaker teams, look at some of their other opponents OU vs. Miami (Miami in a down year, but still) Texas vs. TCU (who many think will be the best team not in a BCS conference this year) A&M vs. Fresno State Boise St. vs. Washingon West Va. vs. Maryland Florida vs. Florida St. (down year for them, too) Wisconsin vs. Washington St. Ohio State vs. Washington South Carolina vs. Clemson

You schedule some easy games to get a look at your people, and some tougher games to test your team and measure your talent. Right now, we are still building our personnel. Hopefully in another couple years we will be ready to test our talent.

All you people who are griping about the schedule make me SICK. What do you want, I mean, honestly?? 5-6 years ago these last two teams are teams that we would have been happy to squeak one out against. Now we smoke 'em, and you complain that we aren't playing anybody?? WE ARE BEATING TEAMS WE ARE SUPPOSED TO BEAT--you first must do that before you start scheduling tougher teams, and that has always been our problem (SMU a while back, Toledo last year???). Why in the HELL would a team trying to build their program want to go out and play USCs and LSUs the first four weeks of the year? I had thought that KU fans weren't the type that complain about EVERYTHING, but I guess I've been proven wrong.

It's unbelievable, what some 'fans' think: when we were losing games we stunk, and now that we are winning we still stink because we aren't playing the right teams. Good god, mangino has a lot tougher job than I thought.

Thanks for all of you who found that schedule info, and bmc, great post (sorry we missed you Saturday)

Another stat to consider ... the Hawks have scored 114 in TWO games, they scored about 350 ALL OF LAST SEASON, I'd say the offense is purring under Warnier.

If/when we beat K-State, all of naysayers will just say that aren't that good, thought they almost beat Auburn and beat a bowl team from last season in San Jose State!

Good point about the offense, sevenyear. I said last year that the biggest problem was the offensive coordinator (I've blacked out on his name), and so far this year that seems like an accurate assessment. It makes you wonder how well they could have done last year with a decent coordinator.

Hey sevenyear, sorry I missed ya too--we'll have to meet up before Toledo next week.

I never said k-state was as good as there stupid fans made them out to be, but they did get a lot better in the 90's! I don't think we should keep playing kind of teams if we keep getting better, but for now quit complaining about who we are playing.

The funny part is we play at USF next year. Which will hopefully be a matchup of two top 25 teams and I bet all these people whining about the schedule wont be going down to the game. The guys defending the schedule will be down there.
I know Jimmy Dean, sevenyear, and myself will be. None of us are bitching! Tampa Baby!

I don't know how many KSU fans I have heard making comments about KU's schedule. They apparently have extremely short memories. I'm getting sick of hearing it and I start to think "I really wish we had a tougher opponent or two in there." But then I snap out of it again and realize how much confidence our players are going to have going into the KSU game!! These guys haven't just won these first two games - they are killing them. 45 and 62 points for goodness sake. No interceptions. Safeties. Field Goals. Allowing a mere 7 points. The starters left the game in the third quarter on Saturday. I don't care what level of team they are - those facts deserve some respect. Why should beating a decent team by 3 get more respect than dominating by those numbers? This is starting to make me angry. I am really looking forward to October 6th because I'm pretty sure we're going to leave there 5-0!! That should shut them up.

In case you didn't read the tailgating article - let's leave the red and white home on November 3 and fill the stadium with blue against Nebraska. Thanks!!

I'm okay with the schedule but I think it's time to eliminate the D2's. You get no credit for beating them and if you lose you'll never hear the end of it. Until KU becomes a bona fide contender I think they should schedule non cons that they can beat. The problem is you don't know how good those teams are going to be when you schedule them.

I think Mangino has to have another winning season before he can feel secure enough in his tenure to beef up the schedule.