Did KU run it up? Baylor says no 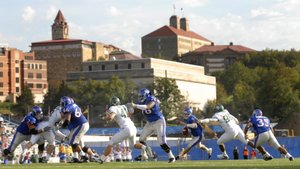 Instead of taking a knee and running out the clock, Kansas University's football team elected to run a final play Saturday afternoon in the final seconds of a lopsided victory over Baylor.

Oops. Angus Quigley turned a simple dive play into a 22-yard burst for a touchdown, making some wonder if the Jayhawks ran up the score in a 58-10 shellacking of the Big 12 South Division school.

"No," Baylor coach Guy Morriss replied, asked the "did KU try to run it up?" question. "They are just running their offense."

A Baylor beat writer asked if KU coach Mark Mangino apologized for the late TD as the two shook hands at midfield after the contest.

"He said something about it," Morriss replied. "I told him that was our fault. It's our job to keep you out of the end zone. He was running the football. If he was throwing the fade three straight times in a row, it'd be one thing."

"I've never complained about that," Morriss said after his team fell to 3-4 overall, 0-3 in the conference compared to KU's 6-0, 2-0 mark. "What do you tell your kids? Try not to score after you program them to execute your offense? That's on us to get them to stop. I have no problem with that at all."

Starting quarterback Blake Szymanski, who was lifted for a spell in the third quarter after throwing three interceptions, said "probably," when asked if KU ran it up.

David Gettis, who returned a third-quarter kickoff 97 yards for a score, said KU did not run it up.

The Bears didn't blame the one-hour, 45-minute delay in the start time (because of lightning) for their ineffectiveness. Nor did they blame a 30-minute delay that immediately followed Marcus Herford's 88-yard kick return for a score that busted a 3-all tie.

"It was the same for both teams. That's just something you have to learn to handle," Morriss said. "(After the kick return) we went in and talked about what we'd seen, tried to get everybody calmed down and tell them the importance of executing, do what you are supposed to do so we can get back in this thing. We warmed up. I didn't see a lot of change (when play continued)."

The Bears tried different looks at QB. Transfer Ryan Roberts took over in the third quarter, then it was back to Szymanski, with freshman Tyler Beatty finishing up.

"The last couple of weeks, he (Roberts) has probably been sharper in practice," Morriss said. "We felt he deserved a shot, see what he can do, if nothing else let Blake stand on the sideline, maybe slow things down a bit, get his composure back. We put him back in. It didn't get much better so then we go to the freshman and see what he can do. He wasn't any better, either."

Morriss said the Bears probably would return to Szymanski for Saturday's home game against Texas.

kudos here to Baylor's players and coaches for not blaming the lumps they took on anything. I didn't stick around to watch those last two TD's in the 4th quarter, and I understand we were running the ball (and the few passes meier did throw were for short yardages, so they were likely dump offs and such) but did we score those TD's against baylor's first string defense? also... GREAT to see quigley getting on the field this season... after being the heir apparent before last season, he had all but disappeared even after supposedly climbing his way back up the depth chart before this season. seems like between Quigley, Bean, and Boyd-Anderson, even after McAnderson graduates we should have some good depth at running back (although I do see Sharp being a solid 20-25 carries a game guy after this year)... wow that was long. Great job yesterday hawks!

Perhaps the reason that none of Baylor's QB's did well had something to do with how great the KU defense is.

nice to see morris didn't misconstrue what happened at the end of the game as any disrespect; i'm still shocked that people are even hinting that mangino was running up the score. when i first heard some rumblings about that i checked the play log and the last 2 possessions both started in baylor's territory. we had already taken our 1st stringers out and weren't attacking the end zone - just running base plays.

for the losing team what's more insulting? having the offense bust a dive play 22 yrds for a touchdown or "pitying" you and kneeling three times?

I was very excited about Angus Quigley's play yesterday. BTW he never climbed back up the depth chart in the off-season, he simply got back to 100% healthy, healthy doesn't necessarily mean he is in playing shape. Now he has had a few weeks of practice, and looks ready to go.

We did go for it on fourth down late in the game, so I can understand some of the grumblings. I think it had more to do with the coaches getting Quigley enough snaps to evaluate him for later in the season. We couldn't afford to put him in to evaluate him when a game was on the line, so this may have been one of our last chances to get him some snaps in garbage time.

He looks like a stud and an incredible replacement for B-Mac for next year. He is a little smaller than B-Mac, but is definitely still a big guy at about 210. He makes up for it by having faster acceleration, and hits just as hard. He owned one of the Baylor defenders (I think it was a linebacker) right in front of our seats. The defender came up to meet him about a yard short of the first down line. Quigley laid the wood on the guy and everyone in the stadium could hear a sickening thud. The first thing the defender did was to get up and run immediately toward the sidelines, visibly shaken up. He wanted no more of that!

Quigley looked like an NFL caliber guy out there. Shifty in traffic, and hard hitting in space. I love Sharp and B-Mac, but add him to the fray with Carmon Boyd-Anderson and you have one heck of a talented log jam at running back.

Looks like the odd man out is Donte Bean, he hasn't done much when we have put him out there, yet he's obviously a talented athlete. The coaches will probably have to find another area where we can use him if he wants to get on the field. Carmon Boyd-Anderson is a great guy for the future, but I think we may run Quigley more as a third option from now on this year, Boyd-Anderson has plenty of time with three years left to have a great career, but now it's crunch time for Quigley. Hopefully Boyd-Anderson will understand.

Can't blame a coach for putting his reserves in the game and expecting them to execute in the same manner as starters do. But, if you can take a knee to end the game then that is what you should do.

I really didn't think it was running up the score, and--although I could see the option of taking a knee--I think it's more important to see how the reserves execute the plays in game action. The only quibble I would have is that it would have been nice to go even beyond the second string and put in some third-stringers. It would be especially interesting to see a third-string QB. You never know what can happen with injuries, and if you're ahead by 40 points late in a game, what does it hurt to give some deep backup players some action?

I'M SURE THE COACHES WOULD HAVE LOVED TO PLAY SECOND AND THIRD STRING THE WHOLE SECOND HALF, BUT YOU HAVE TO REMEMBER SOME OF OUR STARTERS ARE GETTING MORE EXPERIENCE AND MUCH NEEDED GAME CONDITIONING FOR THE TOUGH GAMES COMING. AND LET'S NOT FORGET SOME OF OUR MELTDOWNS LAST YEAR. COACH HAS INSTILLED THE TAKE NOTHING FOR GRANTED AND TAKE NO PRISONERS ATTITUDE, WHICH YOU CAN TELL THE TEAM HAS ADOPTED. THEY KNOW THEY CAN WIN WHEREAS BEFORE THE HOPED THEY COULD WIN. IF YOU WERE AT THE GAME YOU SHOULD HAVE NOTICED THAT WE HAD SOME SECOND AND THIRD STRING GUYS PLAYING AGAINST THEIR NUMBER ONES OUT THERE IN THE 4TH QUARTER WHEN WE SCORED THE LAST 2 TOUCHDOWNS. IF THEY HAD THEIR SECOND UNIT ON DEFENSE IN AND WE WERE PASSING THE BALL TILL THE END OF THE GAME, THAT WOULD BE CONSIDERED RUNNING UP THE SCORE. BUT PLEASE DON'T ASK A RUNNING BACK WHO HAS HAD ONLY A FEW CARRIES NOT TO RUN HIS HARDEST ON A DIVE PLAY. THAT'S HOW PLAYERS CAN GET HURT. I APPLAUD OUR PLAYERS AND COACHES AND THEIRS ALIKE FOR GOOD SPORTSMANSHIP. KEEP UP THE GOOD WORK BOYS!!!!