For the first time in Kansas football history, the Jayhawks are 11-0 after taking down the Iowa St. Cyclones, 45-7. 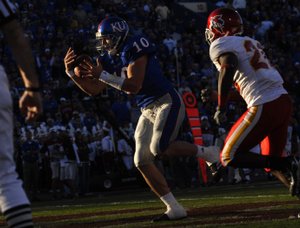 Passes without an interception for KU's Todd Reesing

Kickoff (p.m.) for the KU-Missouri game Saturday in K.C., Mo.

Penalties-penalty yards for KU on average coming in

Don't be alarmed by the massive, beyond-your-wildest-dreams hysteria that will surround this edition of the Border War. It's expected, especially after both No. 4 Kansas University's and No. 6 Missouri University's football teams defiantly took care of business all season long.

For the Jayhawks, it was a 45-7 victory over Iowa State on Saturday that punctuated the resume heading into the Missouri showdown - expected to be an out-of-this-world rivalry game that never has seen better days.

"I'm sure : " KU coach Mark Mangino started, before catching himself. "I'm not sure, I am absolutely positive that (the players) are looking forward to that game."

Funny, because the Jayhawks showed a remarkable amount of maturity in keeping Missouri in the future and focusing on Saturday's task - pulverizing the lowly Cyclones.

Lost in the forward spin is yet another reminder of how good Kansas is this year. Saturday's victory, a businesslike beatdown if ever there was one, moved the Jayhawks to an unprecedented 11-0 on the season, including 7-0 in Big 12 Conference play.

Some dings were noticed on the armor - KU had an uncharacteristic nine penalties, several costly, and had three starters out due to injury - but the Jayhawks made it work anyway.

Outgaining the opponent by 332 yards probably is enough to beat any poor soul. Kansas did just that, making Senior Day at Memorial Stadium a quick mismatch.

Add another win to the pile. It's getting tall.

"The guys in the locker room are not surprised with how we're doing," linebacker Joe Mortensen said. "In our eyes, we can be even better."

Even Todd Reesing? KU's sophomore quarterback has been good all year long, propelling himself into the Heisman Trophy race. But in the first half Saturday, Reesing was darn-near flawless.

"Sparky" was 17-of-18 passing for 221 yards and four touchdowns in the first half alone. His only incompletion was a throw-away just one play before hitting Dexton Fields for his second touchdown of the game.

One incompletion in the first half. And he did it on purpose.

"You never really know how you're doing or what your numbers are," said Reesing, who finished with 253 yards, four touchdowns and five incompletions. "I felt pretty in sync. The offensive line was giving me time and a chance to throw the ball, and the receivers were finding a way to get open. When all that's going well, it makes my job real easy."

Not surprising, then, that the Jayhawks smoothly rolled to 566 total yards and 45 points - more than enough for yet another victory.

But the most impressive part of Saturday's game was that Kansas easily stepped around a potential trap on the schedule. With Missouri, a 49-32 victor over Kansas State on Saturday, looming with the Big 12 North title at stake, the eyes of the surrounding community began to move toward Nov. 24 and the Border War game at Arrowhead Stadium in Kansas City, Mo.

Any hint, then, that the players were thinking about the Tigers? Even a little bit?

"It never really entered our minds," said running back Brandon McAnderson, who had 70 yards rushing and joined the 1,000-yard club Saturday. "That's not the way we operate."

Added Mangino: "The practices were normal tempo and focus. Everything was in order."

Now, the players can stare at Mizzou like everyone else. Kansas (11-0) and Missouri (10-1) likely both will be in the top five of all the new major polls released today. A primetime game at the always-loud Arrowhead Stadium in Kansas City, Mo., is upcoming with national-title considerations at stake.

But remember: It's also a rivalry at its roots. Players like KU's Chris Harris, a true freshman cornerback out of Oklahoma, soon will find out the animosity between the two schools, be it talk by his older teammates, students on campus or former KU coach Don Fambrough, the ultimate Missouri hater.

Harris recognizes what's at stake - mostly. Fortunately for him, he now has free rein to explore it even more.

The pre-Missouri business officially is done.

"I still hate Kansas State now," Harris said with a smile. "But I'm pretty sure come Saturday, I'm going to hate (Missouri) too."

I cannot effing believe this!

This season goes to show how important a quarterback is to a team. KU is stacked at almost every position but without a field general you can take away 3 or 4 or those wins.

Early in the season I was excited to think that we might have our own Doug Flutie.

Now I'm beside myself watching our own little Tom Brady!

Rock Chalk Jayhawk, Time to show the nation that KU is a great team and can beat anybody.

Living in DC and being conditioned over 20 years not to get too excited about KU sports until Basketball practice starts, it was, of all people, a MIZZOU fan that lives in my building that said to me, "you must be ecstatic." That was back when KU was 6-0 and had just cracked the rankings at 20. Yesterday, at the local ESPN Zone, sitting next to other KU fans, we decided ecstatic was the worst sort of understatement, because what Jayhawks everywhere feel now is transcendent ... beyond words, beyond anything but that feeling which cannot be named. I haven't watched so much football since I was in Lawrence attending games, and I must confess I'm not sure I recall watching much football then, but the student section was fun and the drinks good. Thanks to this outstanding team for this wonderful ride, and know that many people are rooting for you, not just Jayhawks. At the bar yesterday, Ohio State fans, Florida fans, even LSU fans were cheering with us and wished KU well against Mizzou. As one Ohio State fan said, "how can anyone not be a Jayhawk fan this year, any time a team has a season like this every football fan should hope they run the table, its just such a miracle and so much fun to watch."

ROCK CHALK JAYHAWK! Get that tiger by the tail!

Where in DC to Kansas fans congregate? Are there any KU bars for sports watching?

Well put DC. I'm glad to hear other fans showing us love rather than hate. The only person giving us love in the media is Lou Holtz. For some reason he really digs us.

moveforward i'm not from d.c. but in denver there are certain bars for certain teams. There is one bar here just for LSU fans and i mean they put up banners, play the team song and chant along. It's actually kind of cool. There is also bars were it's mostly only KU, MU, and KSUck fans.

Lou likes us because he was a successful coach and knows that you can't go 11-0 without being a good team. Corso on the other hand had a losing record in 10 seasons at Indiana. He managed to con ESPN into believing that he is an expert and has an ego big enough to convince himself that he knows college football better than anyone else. If we went 13-1 Lee would pat himself on the back and say "see, I told you so."

Lou Holz digs us because he's a coach, and this team is a coach's team -- winning by virtue of team spirit, smart play and hard-nosed toughness.

moveforward ... I've heard a group gathers at Ramparts in Alexandria, and there used to be a group at a bar across from the Uptown theater on Conn. Ave. ... if you live in DC contact Cong. Dennis Moore's office and they can put you in touch with the DC Alum group that organizes game nights.

Holz isn't the only media believer, though I think he caught on first, others have written and talked about how the Jayhawks are all about team, and having a response to everything. Of course there are haters out there, always will be.

REFUSE TO LOSE! <<<<< best sign in the stands yesterday referring to unbeaten teams on the field and the court!!

Lou picked Kansas as a dark horse to win the North in the pre-season show before a game had been played. Corso is has difficulty with our success because he coached at a basketball school and couldn't accomplish anything close to this.

Here is a link to the DC chapter of the Alumni Assoc. It lists a few watch sites in the area...

Jayhawks are #2 in all the polls that have come out thus far, BCS should have them #2 also.

Can't expect everyone to pick KU every game but I find it amazing when media people refuse to acknowledge that KU is a good team when they keep winning week after week. Lots of "experts" have picked against us this season but only a handful refuse to acknowledge us. Herbstreit has picked against us this year but he acknowledges that we are a good team. On the other hand Corso in my opinion is a complete fraud. He's either too stuborn to admit his mistake or he is just too in love with the sound of his own voice.

A large group of us watch KU football and basketball games at Porter's at 19th and M, NW. During football, we have turnout between 40 - 100, and during basketball season, we easily get 100 fans there to watch the games. Come join us!

I don't know how big the group will be over Turkey weekend (a lot of us are going to the game at Arrowhead!), but we'll be there for all other games.

Hope to see yall there. Please pass on the word!!!

Oh and ps, the bar on Conn. Ave that an above poster suggested, closed. It was the park bench, Scott Porter owned it, then opened up Porter's downtown. Thus, moving our group as well.

Another smaller (and tad older) group of alums meet at Bailey's in Crystal City but Porter's has quickly become a favorite place for Jayhawks over the last year.

Hope to see yall there!

Ohio State fans may have been rooting for us on Saturday, but after OU lost you can be sure that they will be rooting for both us and Mizzou to lose in the coming weeks.

All I can say for our team right now is "Todd, if we ever turn the ball over, let someone else tackle the defensive lineman returning the fumble. We don't want you to look like Sam Bradford."

11-0!!! I can't believe that a team who didn't make a bowl last year, wasn't even ranked at the beginning of the season, is now #2 and is a contender to get into the national title game! I also saw something i havn't saw before....A KU player featured on ESPN! Yep they just had a cool video of Todd Reesing getting interviewed about how he can see so well while being only 5-10. No player from KU has ever won the Heisman have they???

<p>Rivals.com: On Sunday it became official that Duane Zlatnik, one of the top strong-side defensive ends in the country is headed to Kansas.

Thanks everyone for voting for Sparky (Todd Reesing) for the Davey O'Brien Quarterback award! He finished first, and is now a finalist for this award. Voting for the finalists will start today! SO KEEP VOTING! The website is www.daveyobrien.com! You have to register to vote. BTW, the national media is touting Tim Tebow (Florida) and Chase Daniel (Mizboo) as a two-horse race for the Heisman. Let's show them that we think otherwise! Please also vote for Coach Mangino for Coach of the Year at www.coachoftheyear.com! Thanks again Jayhawkers!