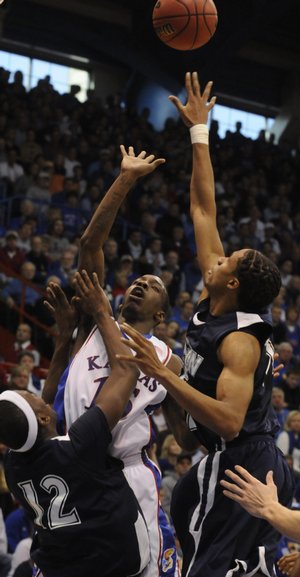 “We’re not tough right now. Call it like it is. We outrebounded them by one (39-38). Think what it’ll be like when we play Texas. We need to get better, quick,” Collins said.

“We have to get a swagger to ourselves that we are tough and believe it,” added Collins, who scored 17 points with five rebounds, five assists, four turnovers and three steals in 37 minutes.

“We’ve got to get this straightened out,” Collins added.

Coach Bill Self, who has challenged his big men repeatedly at practice, was asked when toughness first became a major issue with him.

“I grew up on the rough streets of Edmond, Okla.,” he joked.

“I’ve always felt that way. Am I going to get 70 percent of the 50/50 balls or am I going to get 30 percent? Those extra possessions win or lose games. We’re a team that gets 30 percent now. It’s an area we have to get better in.”

Self was asked his plans for Saturday night after the matinee victory.

In other recruiting news, Dominic Cheek, a 6-5 senior from St. Anthony High in Jersey City, N.J., will choose between KU, Villanova, Pitt, Memphis and Rutgers this week.

KU made three of four free throws the first half to JSU’s 12 of 17.

“I asked the officials about that a few times, and they obviously thought that we fouled more than they did,” Self said, asked about the Tigers getting to the line. JSU hit 21 of 29 charities to KU’s 14 of 17.

Love the "I'm going recruiting" comment. We need to get Perry Ellis in a few years, although I will settle for a Cheek signing this week.

I love the leadership from Sherron. He nailed it.Texas will eat your lunch if you don't man up on every single possession determined to own 50/50's.The twins have a lot of talent, and no question they will get there if they want to. Great coaching and good kids around them.Tough expectations. I don't think I gave 110% for every single assignment on Friday either......Maybe I'll try that on Monday!Really kind of hard to imagine the level of expectations on these kids.

I hope Cheek can understand that his chances of being drafted high means choosing KU. Bill self knows how to get every last bit of talent out of his players. Also, my hats off to Danny Mannig in getting those big men to play to there level. they will only get better and better. especially if they learn how to be more aggressive like Darnell last year!

Perhaps it was the early game which had this team sleep walking. Sherron will get these guys tough. Give them boxing gloves and go at each other.

I've given up on hoping for any recruits. If they come great, but the logic of a kid wanting to come to a big time program seems to be going by the wayside. Snaer proved it by picking the one of the crappiest teams in the ACC. Not, UNC, not Duke, not Wake, not Ga Tech, not NC State ... freaking FSU. WTF?

I think the recruiting landscape is evening out. You can't just recruit on a name anymore. Snaer (11) is going to FSU. Milton Jennings (12) is going to Clemson. Royce White (19) is going to Minnesota. Rashanti Harris (26) is going to Georgia State.Why? Well, guys like Jason Thompson (Bradley), Courtney Lee (Western Kentucky), and George Hill (IUPUI) were first round picks in 2008. Rodney Stuckey (Eastern Washington), Jason Smith (Colorado State), Wilson Chandler (DePaul), and Morris Almond (Rice) were first rounders in 2007. Stephon Curry is a likely first rounder next year. Guys have discovered that you don't have to go to a "big time" school to get drafted for the NBA. Before you argue that playing at Kansas gives you a chance to win a title, realize that the window for doing that is very small. Tell that to Jacque Vaughn, Raef Lafrentz, Paul Pierce and some of those other stars that never even got to a Final Four. Going to a Kansas or a UCLA or a UNC or a Duke is no assurance of going to a FF or winning a title.

Sherron's UT warning seems kind of untimely. We have plenty of tough games on the schedule here in the immediate future: @Arizona, @MSU, Tennessee in the Phog, etc. Plus, Oklahoma seems like the toughest team in the conference anyway. Hope the guys aren't looking past our non-conference slate.

justanotherfan,That is a very interesting argument and, while I would like to refute it for KU's sake, I can't.What I can say is that in such a "deregulated" recruiting environment, the quality of the coach, in all facets of coaching related to player development and showcasing become ever more important.I am not however convinced that the best player showcasing occurs under coaches who either let them play maximum minutes, or devise a Princeton on Altoids :-) offense that lets them shake and bake around pics outside.We had a lot of guys drafted last year, because they could defend like nobody's business. The perimeter players had great trinities, and the bigs taken were physical specimens that could run the floor and finish.FWIW, the perimeter guys probably can go to a mid, or even a low major, and shine enough to be drafted high.My suspicion about bigs, however, is that they benefit quite a lot from going to a Cadillac program. The top hoop schools have more bigs around to work with and against in practice daily to improve themselves. Cole probably is much better off to have been banging against DBlock, Kaun and Arthur last year, than if he had played a season at a mid major.. Mid and low majors do not have Matt Kleinmann's on their scout squads either. And over the course of a year, bigs at midmajors don't get to play nearly as many bigs at other schools in mid major conferenences.

jaybate,I agree with the premise that you outline regarding bigs, except for one thing. In college, most teams don't have much quality size anyway. I remember when Greg Oden was about to play Georgetown in the FF, he said that was the first time he had ever faced someone bigger than him (Hibbert). Oden went through part of the non-con, plus the entire conference season and tournament, and not until that game did he go up against a comparable big man. There just aren't very many quality big guys, honestly. Kevin Love went to UCLA (a Caddy program) but they didn't have a comparable big. Mbah a moute was a power forward in a small forward's body. Duke doesn't have a single NBA quality big guy. UConn has Thabeet, but not much else on the block. At any given time there are maybe a dozen high quality bigs in college basketball. That dozen is spread pretty thin. After that, you get into a lot of undersized guys, or lower skilled big guys.