Flyers in awe of mountainous Aldrich

Kansas center Cole Aldrich pulls in a pass over Dayton forward Charles Little during the second half Sunday March 22, 2009 at the Metrodome in Minneapolis.

Cole Aldrich had 13 points, 20 rebounds and 10 blocked shots during today's game against Dayton. It's the first triple-double in Kansas history. 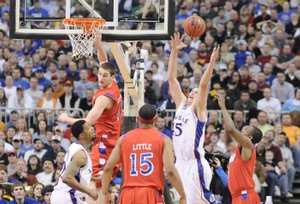 Minneapolis — One of Dayton’s greatest strengths this season had been attacking the basket.

“You get past the first guy and you look up and there is a mountain in the middle of the lane,” Dayton forward Charles Little said after his team’s 60-43 loss.

Aldrich recorded 10 blocks against the Flyers, which tied for the second-most in NCAA Tournament history.

UD’s Chris Wright, who scored a career-high 27 points Friday against West Virginia, had just 10 points Sunday on 4-for-16 shooting.

“That was the first time in one game I got my shot blocked or altered that many times. So it’s hard to compare Cole to anybody,” Wright said. “He is a unique player where he can just stand there and block shots without jumping off the ground. And he did a good job of getting his hand on almost every shot we took in the lane.”

“The thing that he does and no one mentioned that I think he does better than anybody I’ve seen in recent years is be able to alter the shot and then still get the rebound,” Gregory said. “Because he’s not the most agile guy, but he has great hands. So a lot of times guys — like we have guys that can block some shots — but then they’re never around to rebound on the back side. And he does that.”

Dayton made just 16 of 72 field goals (22.2 percent). Its previous worst effort this season was a 27.8-percent shooting performance against Auburn.

“Give Kansas credit because a lot of times a team of that caliber will play us and just say, ‘We’re better than them,’” Gregory said. “And you know what? A lot of teams have found out that they’re not when they just say, ‘We will pressure you. We will do all this stuff. We’re not going to have a specific game plan.’

“Give (Kansas coach) Bill (Self) credit because it’s the first team that had a specific game plan in terms of different ways to guard us. And we had to make some shots in order to get through that game plan, and we just didn’t make enough shots to do it.”

The Flyers’ 43 points also was a season-worst.

“As I said, we are not pretty. There’s no question at times, we’re downright brutal offensively,” Gregory said. “But the fight in our guys showed.”

Little, who had 18 points against West Virginia, contributed just six points on 2-for-10 shooting against KU.

The senior was pulled aside by Aldrich after the game, with the KU center offering sympathies that his career was over before telling him that he should continue attacking the lane.

It might be a tough piece of advice for Little to follow after Sunday’s experience against Aldrich.

“He was just down there, and he’s big,” Little said. “So it is hard to get a shot over him. When I did, it wasn’t a good shot. And he altered a whole bunch. He’s a great player, and he played his game.”

What do you expect from THE BEST?

I like Dayton's class. Way to go out with your heads up.

Good to hear from others what I think we have in Bill Self. There were times during the Roy era when I am not sure we had a game plan. If we did and things were not going right we would still go for long stretches with no timeout. Honestly, I do not know that much about basketball but from my lounger it looks quite a bit different...and better. Loved Roy Williams, but Bill Self was a great hire, maybe the best KU hire ever. If the players are up to it, he can take them to the Final Four again. Why a marquee player would not chose KU is mind-boggling.

Quite a few marquee players have already chosen KU and we have a legitimate shot at landing another in Lance Stephenson. I definitely remember those brutally long segments with Roy where we needed a timeout to regroup and set up a play and he would just sit there with his arms crossed. He is a great coach, but I think Bill is a better X's and O's guy. I will give Roy credit for being one of the best halftime coaches I've ever seen. He always made great adjustments at half and got the team back in the game.