Sidelined with a concussion, Oklahoma forward Blake Griffin plugs his ears from the crowd noise as he sits next to center Orlando Allen during the first half at the Lloyd Noble Center in Norman, Okla.

Jayhawks hang on, take down Sooners

KU defeated Oklahoma, who was ranked third in the nation, 87-78 on Monday night in Norman, Okla. 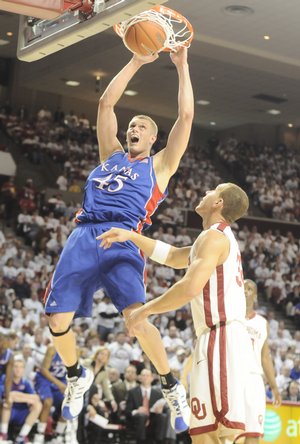 Maybe the Sooners could rally around each other. Maybe they could come closer together as a team.

“Look, I want him (Blake) out there. It may be freshman inexperience talking there,” Capel said with a smile. “Every situation can help. I tell guys, and my grandfather used to tell me when I was younger, ‘You can learn something from anybody, even a fool. You can learn how not to be a fool by watching him.’ So you can learn from every situation, and certainly these are opportunities for us to learn and grow and get better.

“But their coach would prefer to have him out there.”

The Sooners certainly could have used their sure-fire All-American on Monday night.

“He’s a smart player. He knows how to use his body and use it against opponents,” OU’s Taylor Griffin said of Aldrich. “It definitely was a tough assignment.”

Warren and Taylor Griffin both said they were looking forward to playing the nationally televised game without their star.

Blake Griffin, who was averaging 22.0 points and 13.8 rebounds, sat out Monday’s game after suffering a concussion Saturday against Texas.

“There’s a reason we’ve been so high in the polls all season. We have guys that can play ball besides him,” Taylor Griffin said. “We were trying to look at this game as an opportunity to go out and show that.”

Oklahoma didn’t score its first field goal of the second half until the 10:25 mark, and the Sooners fell behind by as many as 20 before storming back.

OU trimmed the lead to three twice, but both times KU guard Sherron Collins answered with threes of his own.

The comeback was largely helped by bench players Omar Leary and Cade Davis, who combined to hit six of 11 threes in the final 7:59.

Capel had high compliments for the Jayhawks, who took over sole possession of first place in the Big 12 with the victory.

It's still crazy that Blake has only played 5 minutes against KU in two seasons.

Has anyone actually seen any picture of Blake getting hit that looked remotely like it was significant enough to cause a concussion? I sincerely hope he is okay, but I wonder if there is something more going on with him.

Blake took a few shots in the Texas game that probably lead to the concussion. All the ESPN highlights keep mistakenly showing the open hand from Pittman as the damaging blow but there were two others that could have easily caused the concussion. It was probably a combination of all three. The other issue I have is ESPN and OU keep talking like it was good to hold him out so he can get healthy for the rest of the season.... Shouldn't they be saying its good to hold him out due to the fact that a concussion can be LIFE THREATING. Doesn't that out weigh the rest of the season?

I had my bell rung twice a week and a half a part in high school football. The second one ended my brief, feeble football career. I have never felt pain, or delirium, like that second one. I should not have come back to play for several weeks, or maybe months, at least. And the sensitivity just to shaking my head side to side lasted for up to a year with me.

Guys who say they play with concussions have to have pretty mild ones like my first one. I really wasn't the least bit afraid of going back out into contact with that first one. The pain was utterly manageable, almost gone within a week, except for some nagging sensitivity to shaking my head side to side, or playing helmet slap with teammates in warm up.

But that second one! Yeeeeowwww! I was pretty much vegetable stew for 4 days and kept pinching the bridge of my nose for two or three weeks afterwards. In short, I looked and acted a whole lot like Blake Griffin after the second one. And I was incredibly slow on the draw for several more weeks after that!

Blake Griffin and Coach Capel were unwise having him waste his time on the bench. He clearly was not all present and accounted for. He should have been at home in bed watching from a TV. And the freaking noise in that arena and the bright lights must have done him no freaking good at all. His teammates would have played just as hard had he not been there.

Cole Aldrich is right to tell his good friend that recovering from the bell ringer he got is waaaaay more important than playing any more this year.

Oh, he'll play again this year, because the doctors cannot really say when one is really healed. They can only say when the obvious symptoms are gone. And he will be a lot better after 2 full weeks have passed. And so he will play in the conference tourney. But if he gets hit in the head again in the conference tourney, he's going to hit the floor like a ton of bricks. Lights out. Sayonara. Hasta la vista baby, and then he'll be off in territory that I fortunately never experienced.

Hang up the tennies for this year, Blake; that's my advice to you. A year, maybe two from now, it will all finally be behind you. Even take another year off if it feels anything less that normal. You will still be a great, great basketball player worth beau coup bucks after sitting out a year. No one will give a hoot that you sat out a year. They'll all be begging to get you still. But ring that bell just one more time, and you're playing days are probably going to be over. In the NBA, the thugs just don't miss a shot to give you a pop in the head, if they suspect you are soft there.

And people who say they've had concussions and who advise you otherwise, well, they've just gotten their bells run a little. Ignore them. There's a threshold with brain injuries and you look like you've crossed over it. The neural nets are shorted right now and nothing but time is going to fix that.

Post Script: someone tell the refs to start calling the game according to the rules. What's happened to the game this year is as disgraceful, as the year MSU played Wisconsin for the NCAA championship. Blake Griffin out with a concussion. Three U of Oregon basketball players out with concussions at the same time! Cole with a busted nose. That Pitt center throwing Thabeet over his shoulder onto the floor. This is going to spiral to a crisis one of two ways: a) some player gets paralysed for life; or b) violence breaks out in some horrible way.

Stop in the name of the trees!

The tall young men who play in the paint.

And the short, beautiful, balletic ones who soar around the perimeter.

Stop the violence, Mr. Referee, in the name of the trees...before its too late!!

Thats how you spell beau coup bucks!!! I never really thought or have seen it in writing.. Nice, thanks JB... Rockem Hawks...