KU tipped off the 2009 Big 12 season with a 17th-straight conference opening win. It was their 33rd consecutive victory in Allen Fieldhouse. 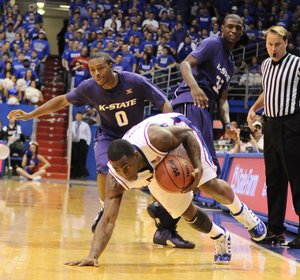 The Jayhawks didn’t look good kicking off Big 12 Conference play Tuesday night. They looked great at the start of an 87-71 victory against Kansas State, which of course means it’s time to get too high on them.

OK, here goes: The way Kansas looked in taking an 18-0 lead, it’s not unrealistic to believe it could take a 6-0 record into Waco, Texas, for a Big Monday matchup with Baylor on Feb. 2.

No, really, not just because by the time K-State attempted a shot Tuesday night, Kansas led, 9-0. Look at the schedule. Next up is a Saturday game at Colorado, then back home Monday for Texas A&M, then at Iowa State for a Saturday game. Four days after that, it’s off to Lincoln, Neb., to play Nebraska. Three days after that, Colorado comes to Lawrence for its annual Allen Fieldhouse visit.

Kansas starts 6-0, and it will storm into Waco with its confidence flying high.

Sure, we’re getting way ahead of ourselves, but young talent has a way of having that effect. It makes you see a bright future, especially when Tyshawn Taylor weaves through traffic in a blink, soars and lays one off the glass with his left hand as if it were his dominant hand.

Taylor’s 20-point night pushed his season scoring average to 10.1 points and gave Kansas something in common with 24 of the 25 nationally ranked schools: a third scorer averaging in double figures. (Minnesota, with just one, is the exception.)

Taylor and Collins had big nights, combining to outscore the Wildcats’ quick guard tandem, 44-22. Whereas KU’s guards generated 27 points on 18 shots from the field, the K-State guards scored 17 points on 28 field-goal attempts..

Collins remains a little quick with the trigger at times and can force the action and turn the ball over more than a point guard should — he did so four times in this one — but to an extent, that’s the price of doing business at such a high speed and in such an aggressive manner. He’s a vicious attack dog, not a wimpy show dog.

True, it wasn’t a perfect night for Kansas (12-4). K-State was able to pull all the way back to within 45-42, a brief scare until Brady Morningstar swished such a soft three-pointer from the left corner to take 16,300 fingers away from the panic button.

K-State did get 16 offensive rebounds. Much like Bob Huggins’ teams through the years, it can be said of Frank Martin’s team that its best offense is a missed shot.

All things considered, though, it was an encouraging and entertaining night for Kansas. The ghost of former fan favorite Sasha Kaun, now playing for big bucks in Russia, even made an appearance in the fieldhouse. Unfortunately, it came when Tyrel Reed was at the free-throw line. Reed, who made 20 of 21 free throws to start the season, missed his first two attempts of the game, running his misfire streak to four until hitting his last two.

Now it’s off to Boulder, the perfect place to pick up a road victory, with half the place packed with KU fans and the worst team in the conference as the opposition.

The game in Lincoln is the scary one. Even the most mature Jayhawk teams have struggled there.

What about Hilton magic? Never underestimate ISU in Ames.

This team may struggle to bring home a win from Boulder. Need to think tough...

Truthfully, Keegan is exactly right. But until we see this team win A road game of any kind, I'm not going to be counting on them winning three straight in league play - no matter the opponent.Great win last night though, and hopefully that team will make the trip to Boulder.

This team needs to take it one game at a time... and so do the sports writers here on kusports.com.

TotoHilton magic has been dead for a number of years. I live in Des Moines and ISU isn't looking all that great this year. They strugled agianst Huouston Baptist in Hilton. Let alone it's the only game I'll get to see in person this year so hopefully I'll see a win.

For young teams like Kansas .. EVERY away game is a challange. They are kids and as kids they dont like being away from home. For KU to do well they are going to have to improve and improve quickly. Ty is a big key if he can mature quickly he will be a true force with Sherron. Little can be a great help but hes small and we need some help for Cole inside, aka (THE TWINS) - They need to improve the most and the fastest. Somehow we need to light a fire under them and get there motor running faster, they appear lazy jogging back on defense. They are HORROBLE at blocking out ( I call them rim watchers ) They need to put a body on someone and keep them out not just play jumpball under the basket. They get pushed under the rim ( can't rebound there ). BUT if those two and Ty can mature quickly we have a great chance to get your 6 - 0 wish in my opinion.

Well I hope you are right firket, but I've seen some great teams go into Ames and get upset, so I'm going to have to give them the benefit of the doubt. Besides, everyone fills their fieldhouse when Kansas comes to town.

I love some of the stats Keegan includes today! They are really interesting, especially about the top 25 teams.

How is Minnesota ranked, let alone winning games with only one scorer averaging 10 points? They most have the stingiest defense, or does he average 40 per game... I am grasping for straws here.

TaCity,perhaps Minnesota's next 7 guys are each averaging 9 points a game

If you look at the Football schedule next year, KU could go 6-0 before facing Oklahoma at Home next year as well.

Toto is right, we always have the most difficulty playing in Ames. Over the past several years it has been that way. As far as Minnesota is concerned, if they spread the offense, and have a different threat each game...reminds me of team that went all the way last year. If one guy is consistently getting 10 plus points, then you have others who average high numbers, plus ones that come off the bench and produce...its no mystery. I really believe the danger in the North is Nebraska and Godforsaken Missouri. If we can walk into both of those places and get wins, I would say that our team is ready for tournament play. Hopefully our guys will have an edge on them from Arizona and MSU. I believe that at that point of the season, Mario will be a great leader, as too will Aldrich, Collins, and yes...Reed.

"until we see this team win A road game of any kind, I'm not going to be counting on them winning three straight in league play ..."That's contradictory since KU should win three straight in league play without having to go on the road. After all, their next two are at Colorado (aka AFH Far West) and vs. aTm. They don't have another road game until ISU.

Tyshawn, thanks for adding the triple threat. With Tyrel remaining consistent, once Mario gets his game going, we are going to be tight. We as fans have no idea how good Mario really is. I believe he is going to peel a few caps back, before it is all said and done this year. Wrap your mind around this sweetness. Collins, Aldrich, Taylor are our triple threat for starters. The twins develop and begin to let the game come to them, which will make Aldrich even more dangerous. Reed comes off the bench for Morningstar and now the defense has no idea who to lock down on. Once Collins or Taylor get tired, our developed Releford comes in to add the second spark from the bench. If we can get Thomas developed...look out.If it all comes together at the right time, we will take everyone by storm. Might even make a decent run in the tournament. God I love Kansas basketball and the genius of Self and his coaching staff for recognizing great talent. Gonna Rock Chalk to my death bed.

Here's what I see: TA&M. And its not a sure victory. They beat Aridzona. We didn't. Their schedule otherwise does not look as tough as KU's, but they have 2 fewer losses, too. And TA&M can rebound. Any team that can rebound is by definition a threat to KU, until KU discovers how to rebound and prevent an opponent from doubling them in offensive boards.

I hate to sound pesimistic, but K-State looked horrible last night and so did we. It's going to be an up and down season unless the Morris twins can start carrying their load on the defensive end. I really feel the season pivots on these two talented youngsters. They need to drop their attitudes and play hard-nosed defense less the whining.

Nebraska Jayhawk.....AMEN BROTHER!!! PREACH ON!!! Can the congregation say AMEN?

I saw Iowa State get beat by Hawaii here in Honolulu. It's going to take a lot more than Hilton Magic to win that one - more like a Hilton Miracle.At CU is a home game for us, so I really see the big test being A&M at home and then Nebraska. A&M will probably end our homecourt win streak I'm afraid.