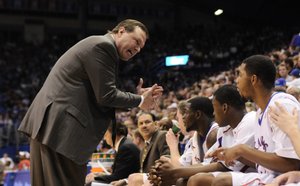 Even when he was slumping, Tyrel Reed wasn’t bumming.

“I never worry about my shot. I feel like I’m a good shooter,” the Kansas University guard said. “Sometimes, they just don’t fall. Lately, they’ve been falling.”

Reed didn’t have any problems getting his shots to go down Tuesday.

The sophomore posted a career high with 14 points in KU’s 91-84 victory over Siena. His previous best was 12 points, a number he’d hit three times already this season.

“Tyrel’s been good. He’s made some big shots for us and knocked his free throws down,” KU coach Bill Self said. “I’m not being remotely negative — I’m just being real about this — he’s a guy that needs to make shots for us because that’s what he does. He’s a terrific shooter.”

Reed did most of his damage in the first half.

He went 3-for-5 from the floor and 2-for-4 from three-point range in the opening 20 minutes, tying Cole Aldrich for the team lead with 10 halftime points.

“It wasn’t anything special — just a guy finding me at the right time,” Reed said.

Reed and KU’s other guards broke open many times because the Jayhawks were able to get the ball inside to Aldrich.

Once the sophomore center was double-teamed, he located his teammates.

“Our team shares the ball really well,” Reed said. “Whether you get it to the post to Cole — he’s really good at kicking out and finding open players. I think that’s just a testament to our team that we want to share the ball.”

Added Aldrich: “It’s real exciting they’re getting it in the post. They know if they get it in the post, I’ll throw it out if I don’t have it. I won’t be selfish, and they’ll get open shots.”

He made all four of his foul shots in the final 1:56 and also added a crucial defensive rebound to help KU hold off Siena in the final minutes.

“I think there’s been a little bit of maturity toward the end of the game where we don’t get rattled as much,” Reed said. “I think Sherron (Collins) and Cole do a great job of keeping everyone’s composure. It’s finally showing through.”

from above...He went 3-for-5 from the floor and 2-for-4 from three-point range in the opening 20 minutes, tying Sherron Collins for the team lead with 10 halftime points.Pardon me, but wasn't it Cole (instead of Sherron?) that was the other player with 10 at half time???

I'll tell you what I like: I like that the LJW writers , since the UTenn game, have kicked it up a notch. All of the writers currently write like they get paid to do it for a living now. Nothing beats unpretentious, muscular, professional sports writing. I have looked forward to ripping through the stories the last couple days, and not just jumped to the posters comments. Newell apparently did some reps and added the beginnings of sinew and muscle to his prose. He's restricting the cuteness to the lead and he's keeping the lead short. Cute leads necessitate brevity. His verbs of being have diminished and the present participles show up less and less. And the paragraphs cover ground and then jump decisively, but smoothly. Best of all, his final sentence presents substance that cements his theme and keeps the story from going on a word longer than necessary.Props to Newell. Less narrates more, when muscled and contented.

Jaybate isn't being paid to elucidate his point with precision and economy of word...

I love Tyrel, he is one of the best fundamental players on KU

No doubt about Tyrel. My understanding is he is the hardest working player we have. Low turnovers, high free throw percentage, great all round shooter. By the end of the season we should have a well seasoned team. Oh yes, I almost forgot, God please make Cole stay through his Junior year.....at least............pretty please. Amen

kvskubball.....read it again. he has it right in the article! good work! And this article is exactly what I have been saying.....more Tyrel, less Brady! With a little more confidence Tyrel is the guy I want shooting the ball out of set plays. He takes it to the basket strong and gets fouled, its almost automatic with this kid! He is going to get nothing but better!

Tyrel is a true "basketball" player. He takes care of the ball and he shoots great, he just needs a little more experience. As for those talking bad about Brady.... Brady should change his name to CLAMPS DOWN MORNINGSTAR the way he is D'ing people up. Basketball is not all about scoring, you win with defense and rebounding.

JayCeph,Exactly, JC. I'm doing my thing for fun here. Stretching the envelope. The pros are paid to do the straight stuff better than we can and recently they have been trending up.

Strikewso,Did you notice how I shortened and tightened my analysis of Newell? :-)Seriously, the trick to writing is always to tailor one's form to follow one's content and function. Traditionally, a professional journalist is paid to cut to the chase accurately, while filling a certain number of column inches and do so in a way that can be cut without losing coherence when there's a chance to cram in another ad.With the advent of digital formats like this one, professional editors and journalists are struggling to find their ways to a new form of journalism. They still have to write so that it can be cut for hard copy, but the writing is on the wall. Soon, they won't be doing that. And in fact now, they have the problem that while what they write may be cut for hard copy, cut content may be reinserted for digital format.Why is this a problem?Well, in the old days, a good writer had to outfox the editors a bit by inserting some stuff that could be cut, so the editor did not cut other stuff that the writer really wanted to see make it into print.

Editors are like anyone else doing a job. They can't really stop themselves from doing what they do--editing, even when it isn't needed. Editing copy is the way an editor stays in control of his writers. A good editor has to cut sometimes just to remind a reporter who is boss. A good writer in turn has to anticipate this and put in some obvious things that can be cut without appearing to be totally incompetant for having done so. It is an old and time honored dance in any form of writing submitted to editors in any medium, even in scholarly journals. In fact, especially in scholarly journals. :-) I always made sure to put in content that could be cut for editors when I wrote for peer reviewed journals. You have to. And the more new and insightful the content being written about, the more critical it is to throw in obvious stuff editors can cut out. Why? Because it is very hard for people to think. Real thinking hurts. Most persons, including editors, would rather not think when editing. Therefore, if you want to write something that requires thinking by your readers, and you want it to see the light of day, then you HAVE to put in obvious stuff to be cut so the editor can cut it without the pain of thinking about the other stuff in your story. Great editors, of course, will dig down and gut it out and try to think, but most won't. And those that won't are actually very grateful for writers who are considerate enough to give them something easy to cut. If a writer does not provide material for cutting, then the editor thinks a little, gets a head ache, and then in frustration they butcher the stuff that matters. As I said, they can't help themselves. :-)With todays digital formats, however, the problem now arises that when a writer inserts stuff that can be cut for print, adversarial editors can reinsert it into the digital copy and really make a writer look bad. Writers, whatever their vices, and they have many, really do take some pride in the crafting of their prose. So, the writers and the editors are in a kind of no man's land the last five years or so. Things will clarify a lot after hard copy goes to the graveyard, but until then they are going to be feeling their way along.