Texas Tech coach Pat Knight receives a handshake at the end of the Red Raiders’ victory over Kansas on March 4, 2009, in Lubbock, Texas. 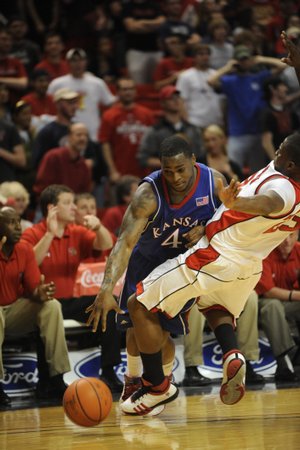 “We came in and we saw (Kansas University’s Sherron) Collins said he couldn’t wait to celebrate in our locker room — winning the Big 12 championship. We weren’t going to let that happen,” Voskuil said after his team’s 84-65 victory over KU on Wednesday at United Spirit Arena. “That just kind of fired us up, and then we said right from there, ‘We’re going to win this game.’”

Before practice Monday, Collins told reporters: “It’s a great feeling to clinch on the road. You get to celebrate in somebody else’s locker room. The bus ride or flight home ... everybody is talking, and it’s fun. It’d be nice to win it on the road.”

Apparently, the Red Raiders took the words to heart.

“We were due for a win. We got it,” Voskuil said. “It was nice to go out — us seniors — with a win like that. That’s something we won’t ever forget.”

Afterward, Pat Knight just put on a smirk when asked if he had introduced the Collins quote to his team.

“I don’t know what you’re talking about,” Knight said. “I get in trouble when I speak.”

Knight was suspended by the Big 12 on Feb. 23 after criticizing officials in a postgame news conference.

Voskuil said he knew it might be his night an hour before tipoff when he hit 10 straight threes in warm-ups.

One of the TTU assistant coaches even went to Knight before the game to tell him, “I think Alan’s going to go off tonight.”

“I just felt like I could let it go at any time, and it was going to go in,” Voskuil said.

Voskuil’s 35 points and nine three-pointers were career-highs. He finished 10-for-17 from the floor and 9-for-14 from beyond the arc.

He also ended his Senior Night in impressive fashion.

After draining a deep three-pointer with 1:08 left, he took a few steps back on the next possession, swishing a shot from about 28 feet for his 35th point.

He did it all while hearing chants of “Voskuil! Voskuil!” in the background.

“I wasn’t missing — I might as well throw them up there,” Voskuil said. “I guess they went in.”

When Knight hugged Voskuil during the final seconds, the coach was so happy he couldn’t even say anything to his 6-foot-3, 181-pound guard.

“For a kid built like a fifth-grader to score 1,000 points in the Big 12 is remarkable,” Knight said.

After the game, Voskuil was mobbed by students, high-fiving and chatting with them as he left the court.

Knight called it his best win as a head coach — one that he would still be talking about in 20 years if he was coaching then.

“I told our guys, ‘In 10 or 15 years, no one will remember your record, but they will remember this game if you can pull it out,’” Knight said. “This is a game they’ll always talk about for the rest of their lives.”

Hope the flight home wasn't too fun, or we'll loose another one.

Mr. Knight: If you have season after season like tonight you will not be coaching. Enjoy it while you can.

I don't really understand how those comments could fire them up...All he said was that it would be nice to win it on the road, which it would...He says nothing about planning on winning it on the road or that he thinks we would win it on the road. That said, I guess you do have to be careful what you say, knowing that any coach can turn it into bulletin board material with the right twist. Also, while I have no knowledge to back this up, I would imagine this was Collins' response to a question such as "What's it like to win it on the road?" or something of that nature, and I really think it should be acknowledged that Collins did not just say this randomly, if that is the case. I don't really know what other answer people expect him to give...

I don't know. Those are the kinds of comments you make after the victory. Anything said before the game of that nature can be used as fuel by the other team. I'm sure Kansas would do the same. However, I'm not sure it would have mattered last night. We stunk.

reminds me of the Baylor game in 2001 on a Big Monday...and Kenny Gregory had some quotes about the Bears...and that got them pumped up.

No excuse for our poor play, but those kinds of comments when visiting these proud South schools should be avoided. Do your talking AFTER the game. This is the only time we play them....and it's their season.

We definitely ran into a buzzsaw last night. UT comes a calling on Saturday...and the Big 12 title is on the line. Maybe we'll just work to get better to win...and not talk about celebrating? (hint, hint...)

There was nothing wrong with what Sherron said.

He never predicted victory. He only made a statement and it is what it is. He wasn't being snooty or anything like that. However, I can see how the other team may have gotten fired up.

Fact is ... KU did clinch a share of the title at TT, thanks to Miss Who. But, I doubt there was much celebration or fun in the locker room or on the trip home.

Pat Knight simply took what Collins said completely out of context, but what a great move by him using it as bulletin board material to fire up his squad. The result was a seemingly impossible win that saved his face for such a poor season of TTU.

Congrats to Voskull -- he was amazing today, and deserves the glory on his Senior Night for that amazing display. He was unstoppable last night.

Quotes didn't lose this game for us. 3 for 19, etc, etc lost the game for us. If Cole had made that layup to tie, the game may have been different. That was ugly.