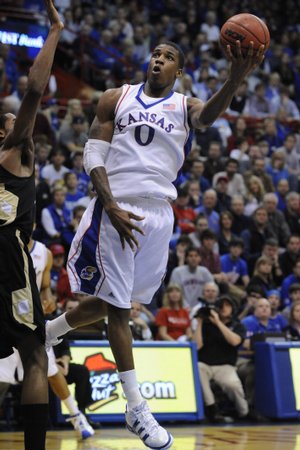 KU point guard Sherron Collins became ill at halftime. He didn’t score and had just one assist while playing 12 minutes the second half.

“He was throwing up, nauseated. Then he fell wrong the second half,” coach Bill Self said.

Collins banged his side and applied ice the final five minutes of the game while sitting on the bench.

“Sherron got kneed about three weeks ago, and he’s still not 100 percent, but he’s not gimping around, and he has never complained once,” Self said. “You can just see the maturity in certain guys and their leadership has been good.”

“I don’t think he’s 100 percent, definitely. I know that he’s been battling the flu and all that good jazz. Most people can’t ever tell he’s sick because he has a good attitude. He’ll get through it, and he’ll be fine,” Reed said.

“When I see him go like that, I know I’m about to dunk,” Henry said, referring to Collins pointing a finger in the air.

Henry was asked if there’s anything better than an alley-oop dunk.

“Maybe hitting a buzzer-beater or a halfcourt shot or something,” Henry said. “It was fun. Sherron makes great passes, and Cole sets great screens, so if you add those together that’s what happens.”

Collins had seven assists, making him the 13th player in KU history to have 400 or more assists. ... Marcus Morris scored a career-best 19 points. His previous career high was 15.

the All-Americans are SICK. Cole sick. Collins sick. X is sick. those dunks are sick. can't wait to see him make a buzzer beater - that will be sick.

SC should get well over 500 A's by the end of the year. That should put him high on the list. (Can't find records at KU Athletics)

I really have no idea where to find the records. I just know its Aaron Miles, Vaughn, and then everyone else.

I wasn't able to find any records either. I wanted to compare Vaughn and Collins in assist to t/o ratio earlier due to a negative comment posted on the story about Collins sharing the ball but was unable to find anything.... at all. If anyone finds the link, do share.

and I just looked at chalmers assists and he had 418 so collins should pass him in the next few games if not faster.

Collins - long way to go with goal of 10+ assists per game to come within range of these guys.

Aaron Miles started at PG for 4 full years in college's most efficient high-octane offense. Hats off and very low bow to him, but the stars were aligned to help him crush the record.

Collins has a better chance at two other school records : most wins in a career and most NCAA Championships in a career -- unless Cole decides to stick around and go for 3 :)

An exhaustive set of School records were in the pre-game pdf for the Oakland game.