Self uses break to teach Morris twins a lesson

Kansas coach Bill Self talks to reporters following the Jayhawks' 83-56 victory over Miami (Ohio) on Jan. 2, 2011. 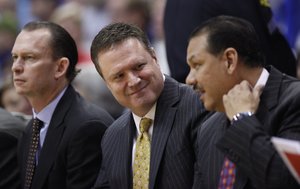 Bill Self addresses the media following the Jayhawks' victory against Miami (Ohio).

During halftime of a game before winter break, Kansas University basketball coach Bill Self finally got through to KU guard Tyrel Reed about his lack of rebounding.

Reed, talking after KU’s 83-56 victory over Miami (Ohio) on Sunday, said something clicked for him following the coach’s comment.

The guard felt like he was wasting his athleticism.

“I think everyone laughed and everything,” Reed said, “but in my heart, I was like, ‘Hey, man, that’s the truth. I’ve got to do a better job with that.’”

In practice, Self emphasizes that his players “hit and go get it,” meaning they should first hit their man to box him out, then make an effort to get to the ball.

After spending most of the season executing only the first part, Reed has been more aggressive getting to rebounds lately.

The senior has grabbed at least four rebounds in each of his last three games. During that span, he has averaged five rebounds per game, which is impressive considering that coming into the season his career high for rebounds in a game was five.

The 6-foot-3 guard contributed four boards against Miami in what was a dominating rebounding effort for KU.

“We had a beatdown on the glass, which is the best that we have rebounded the ball,” Self said. “I think a big key to that is that we had guys running towards the ball. We just seemed like a much more aggressive team today.”

Reed wasn’t the only KU guard to step up his rebounding against Miami. Josh Selby notched a career-high seven rebounds, while Tyshawn Taylor tied his season-high with four and Elijah Johnson added two.

That's making for a nice trend - as long as someone is getting back on D as well.

Pretty much all defensive rebounds.

Yes. One of the problems is that when either Morris shoots from outside very few if any KU players are under the basketball in a position to rebound. Likewise, the guards sometimes shoot when no one is under the basket. It is very hard to get a rebound under these circumstances. But, you are correct the majority are defensive. That is often the case for all teams, but even more so for KU this year.

I thought the little that Withey played he showed some fire and did a tolerable job.

Reed is a strange player.

He has a 40 inch vertical and a coach for a father and he plays an entirely horizontal game for the first three years he is at KU.

His coach says after a game his senior year, "Hey, you have a 40 vertical, why don't you use it?"

Suddenly Reed realizes he ought to grab some boards and ramps up to 4-5 boards a game.

What else is Self not asking him to do?

Maybe he should say, hey you've got a 40in vertical, why don't you get off the 3pt line and go back door for some alley oops?

I bet he will.

People are strange creatures to coach. It is easy to see what they cannot do, and what they are not doing, but could do. The trick is to figure out what is obstructing them from doing it. One of the hardest things for a coach, or boss, is to learn that sometimes it is the coach, or boss, that is signalling a player, or employee, not to do something, because he is not signalling an expectation. In such situations, the player isn't aware the coach expects him to do something, and the coach isn't aware that he hasn't expressed the expectation. It is the most obvious things, the things hiding in plain sight that are often the hardest to discover, unless you become trained to look for such things hiding in obvious places.

I would not be surprised if Reed's game takes another step up, as a result. We are apt to see him on the back door.

I suspect Reed may have had "a small man's" mentality. In other words, as a guard, he was not really expected to play like a "big" and grab lots of boards. But this guy has some serious hops (I still see that drive to the hoop against Arizona where he went incredibly high!). Now Mr. Reed has been challenged to use what God has given him, and perhaps, he's seeing himself and his potential in a new light. Sky high, Ty!

His rebounding ability is amazing for somebody 6'3". The thing he does well is he goes after the ball very strong. TRob does the same thing.

I don’t think Tyrel has more than an ounce of fat on his entire body. What an incredibly athletic physique.

Use that trampoline, Tyrel!