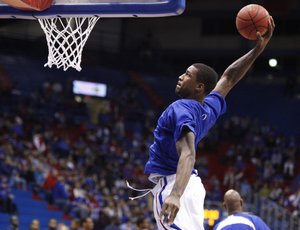 Kansas coach Bill Self talks to reporters following the Jayhawks' 89-34 victory over Howard on Dec. 29, 2011.

Howard coach Kevin Nickelberry was honest when asked what he learned following his team’s 89-34 loss to Kansas on Thursday night.

“Don’t go to any Indianas or Kansases. That’s what I learned,” Nickelberry said with a laugh. “Atmospheres — we haven’t dealt well with atmospheres.”

Howard (4-9) has only lost two games by more than 21 points this season.

Those two, though, have been ugly. Howard lost at Indiana, 107-50, on Dec. 19 before dropping Thursday’s 55-point decision to KU at Allen Fieldhouse.

“Bottom line,” Nickelberry said, “we got our butts kicked.”

The biggest surprise for Howard was KU’s defensive pressure.

“We watched the wrong tape,” Nickelberry said. “I’m probably going to fire my staff for making us watch the Davidson tape, because it didn’t help us at all.”

The Bison posted 24 turnovers, their second-highest total this season.

“(KU coach) Bill (Self) did a great job of changing up their defensive schemes. They got after us,” Nickelberry said. “I watched the tape of the Davidson game, and they kind of played vanilla, but tonight, they denied all our passes to the wing.

“He must have gave a great pregame speech, because we couldn’t run anything.”

“They looked more like KU in the past to me,” Nickelberry said. “(Self) took the foot off the pedal this year because he has a lot of new players, but I’m thinking he’s going back to doing what he knows. He’s not going to let David come in against Goliath and even be a factor, because four minutes into the game, we got knocked out.”

Howard entered Thursday’s game with one of the youngest rosters in the nation. The Bison played five freshmen against the Jayhawks, with four getting at least 15 minutes.

“I don’t care what they did in high school,” Nickelberry said. “They weren’t ready for this atmosphere.”

So what was Nickelberry’s message to his players afterwards?

“You don’t want to know,” he said with a smile. “It wasn’t anything you could print.”

Howard will end its nonconference schedule with a game Saturday at Kansas State.

Earlier this season, the Bison only lost by 14 at Georgetown and by 21 at Oregon State.

“(Self) really found a way to get those guys going, because we are not as bad as we looked today,” Nickelberry said. “We’ve played well, but (in) the two atmospheres — at Indiana and this one — we just haven’t been good. As a matter of fact, we were awful.”

Good perspective for the game, referencing the Indiana, and Georgetown games.

Hard to say what KU learned from this game, other than it was an easy win over a drastically overmatched opponent, and that it allowed all the bench players ample minutes to play. Also, that when the Jayhawks play good defense, they can play suffocating defense.

Best stat for the game: Howard's top scorer for the season only had 3 points on 1 of 10 shooting (also had 5 turnovers). And their next two only scored 5 points each.

What's also amazing is that, with 89 points scored, only three KU players were in double figures. Of course, seven Jayhawks had 7 points or more. And nine had 6 or more points. Meaning only one of Howard's players out scored 9 Jayhawks.

Nickelberry might want to look at coaching as a contributing factor to his team's problems.

I thought he mentioned that Bill Self had the Jayhawks ready.

Riiiiight. Had he made just a couple more in-game adjustments, we'd have had a real nailbiter on our hands. ;-)

I wuz meaning that this Nicholas Nickelberry type guy wuz not doing uh job what Big Julie would not bust his knee caps for, capice?

Self coaching his guys would have given our guys a better game, see?

Dat's all. No nailbiter, but that Nickelberry ain't woyth a dime.

1) Half court lob to Withey for the Dunk off the tip was suhhh weeetttt!

2) It's amazing what a little 1-2-2 half court trap/token pressure will do to a team. Wish that would have been used against Davidson.

Anyway, this game was pretty boring for me so I played the Mascots that don't end in "S" game for all of the NCAA Divison I Basketball Schools. I know there is a couple of more, but I got tired of racking my brain.

However, upon watching the game on DVR, I notice that Armstrong kept calling them the Bisons. So, would that mean the Fighting Irishes? The NC State Wolfpacks? Or the UMass Minutemens? Would have to ask Dave.

Shoot..................How could I forget about the North Texas Mean Green? I did know that one! I did not know the Fighting Sioux until I looked up to see when and whom KU was playing next.

Are you referring to the UNT Eagles?

Not sure on that .. seen them as both. Just looked up on ESPN and they have their basketball team as the Mean Green.

HEM, Hope you are happy that pretty much all of your points were followed from your letter dated 1/29/2011

Now, if we can get Releford to get a bit aggressive offensively ..

Umm, how about GT "Yellow Jackets" instead?

Hey, how about the Georgia Tech Ramblin' Wrecks, instead"

The topic was mascots. The Yellow Jacket is their mascot. "Ramblin Wreck" is their nickname.

posting this, whether being dumb or you are just dumb, is dumb

Isn't Bison the plural for buffalo?

Not sure about #8 & #16 At least when referring to the team. We have Big Jay and Little Jay.

Merv Lindsay has one very smooth shooting motion... Hope to see a little more of that against S Dakota.

The KU Athletic Department should be ashamed of charging money to attend this farce. I understand that the schedule can't be full of big-time games, but last night was absolutely ridiculous. KUAD needs to do a better job of scheduling schools that can be counted on to be at least somewhat competitive.

Get over it. We've already had to play tough teams. What, did you want the KUAD to schedule the Boston Celtics or the LA Lakers to fill out our schedule instead of Howard and North Dakota? Child, please.

I actually enjoyed the game. It was a dunkfest with an entertaining halftime show. Nothing like a Debbie Downer to start Friday off on the right foot.

According to Jeff Sagarin, KU's SOS is ranked 21. The only team int he top 25 with a higher ranked SOS is Duke at 12. Perhaps you rather have Missouri's schedule? After all, its SOS is ranked 340 out of 345 teams. BTW, Ken Pomeroy's figures are pretty similar.

Saw that Cal barely beat that horrible SC team at home .. Cal is one of Mizzou's signature wins.

A fair look at Mizzou is the Illinois game .. a fringe top 25 team; Mizzou beat in the last 2 minutes. Heard someone on the radio mention this point and it's a good one I think.

However, I would not under estimate Mizzou. Could be an odd matchup with their 4 guard lineup. Does TRob guard English? Or, do we start KY instead of Withey? Really, that's the difficulty vs. MU. TRob could get in some quick foul trouble.

But we're better if we can find a way to match-up defensively.

MU almost lost to Old Dominion, a team that is not even ranked in the top 100. The game went basically down to the last minute before MU pulled it off. I believe that MU is a team that will beat inferior competition but might not fare as well against teams with quality bigs. The Big 12 is going to be an interesting ride this season. KU, MU, Baylor, K State and even A&M and OU have a chance to win the conference. I am going to guess that the top team will end up with a record no better than 15-3.

Right, the KU Athletic Department is going to be ashamed of charging money to people who will gladly pay the price to go watch a game. Right. That makes perfect sense.

It was a cupcake..but one in which Howard will make more money from than any other game this season. I though I heard K State would also play Howard. Now if you can find any top basketball institutions that DOESN'T play a cupcake or two..that would be news.

Last I checked our strength of schedule was #2.

They take the beatings for...cha-Ching.

Damn right..you can't load up on cupcakes but they benefit both teams. KU gets a glorified practice w/real game PT for players who usually don't get the opportunity. And the Bison get a big check and some national exposure.

Does anybody know how the revenue and tax revenue that is earned at the Big 12 Tourney and Border Showdown at Arrowhead (in da foosball) is allocated?

The heart of my question is this; How much money does the State of Missouri get when events like this are held on their soil?

nj--"stupidy index?" :) You can't bash someone like that, misspell the word, and then expect credibility !!!

But seriously, call them stupid if you want, but it APPEARS (all caps) to me that the State of Missouri will continue reaping financial benefits from a conference that they wanted no part of being involved with. It's eating at me. Maybe because I don't know enough about it.

I just wish we had a respectable venue on the Kansas side.

To be fair..njjayhawk is from New Jersey and I swear s-t-u-p-i-d-y is how those Jersey guys pronounce it : )

I know I can't be the only one bothered by the lack of FGAs for Travis Releford I appreciate getting the bench and walk-ons plenty of action, but this (and I assume N.Dakota will be too) was a great opportunity to force TR to take some shots. He's got the tools and the talent to score big, I feel like you has to be forced to take 10-12 shots in a couple games to get him looking to score a little more

Tis the season to enjoy the games!

Neighbor's cat use your feather pillow for a litter box again? :-)

Jaybate: You are the most obnoxious person I have never met. I beg someone to cut the bootlegged Internet connection to your double-wide.

TexasHawk44, I totally disagree. I know there are many fans on this board including myself who enjoy reading his posts. I always look forward to bate's viewpoints/commentary. He is very knowledgeable and his writing skills are incredible.

If you don't want to read them, simply ignore them. But please refrain from personal attacks.

C'mon Tex...If you don't like what jaybate has to say, don't read it. There is more than enough room here for differing opinions.

jaybate is an acquired taste. Don't go with your first impressions. . And rumor has it that his double-wide is an exaggeration. It's only a single.

What's up? Tell me your problems. Demon impotence or Governor Rick? Were you giving to his campaign before it imploded?

You know my analyst's iCouch is always open for your therapy.

Ostertag comes out of retirement to join NBDL team

This is one of the strangest attempts at a come back that I can recall.

He should have paid more attention when even Hall of Fame caliber players attempted comebacks. 5 years is an eternity in professional sports.

See the recent article about the players' only meeting following Christmas break where they basically said they need to give proper attention to buisness during games, practices, school, ...

They did seem more intense that what I have noticed for the most part earlier this year. It led to a fun game.

Bottom line is, this game was a total waste of KU's time. They would have gotten in a better workout in practice. This only makes a team take a step backward. We should be angry those guys couldn't compete.