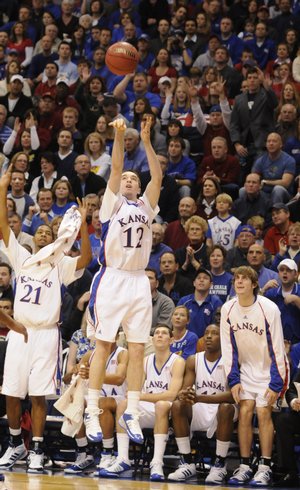 How will KU fare in its first road game against Arizona?

Kansas University sophomore center Cole Aldrich scored 13 points off 6-of-8 shooting and grabbed 11 rebounds despite being weakened by the stomach flu.

“His stomach was cramping the whole game. It took a lot of courage to grab 11 rebounds and score 13 points. We need him. We all tipped our hat to him,” KU guard Sherron Collins said.

“That never even occurred to me. Sherron wasn’t feeling well last week and played. You’ve got to fight through it. Not feeling well is no excuse. (Michael) Jordan had 50-something when he was sick. Sometimes that’s when you are the most focused,” Aldrich said.

The Morris twins combined for 17 points off 7-of-12 shooting and grabbed seven rebounds in contributing to the victory against their hometown school, Temple.

“I definitely got bragging rights,” said Marcus Morris, who came off the bench. His starting role was taken over by Markieff Morris, who opened his first game since Florida Gulf Coast (Nov. 18). “Dionte (Christmas, fellow Philadelphia native) might say something like he scored 21, but he put up 100 shots.”

Christmas scored 21 points off 6-of-14 shooting. The two-time Atlantic 10 scoring leader made six of 12 threes.

“I was real comfortable (starting). Coach said, ‘Don’t worry. Go have fun,’’’ Markieff said. “We needed a new start. Coach emphasized we were starting over after the UMass loss.”

Marcus, who hit four of eight shots and had nine points, said: “This is the first time I think I did play as hard as I could. I felt I was in the game from the start watching my brother. I think my energy off the bench helped a lot.”

Point guard Collins cracked the joke of the day when asked about the twins faring well at practice lately.

“When Matt Kleinmann is not starting, it’s a good week,” he said with a smile.

Kleinmann started the Jackson State game in place of the Morris twins.

Kleinmann, a senior center, grabbed a career-high four rebounds in a four-minute stint in the first half. He was called upon with Aldrich, Markieff Morris and Quintrell Thomas saddled with two fouls each.

“I thought Matt was our second best big man the first half. I was happy for him,” KU coach Bill Self said.

Self on the Morrises

“(Marcus) has a hard time finishing. He long jumps instead of high jumps. He did some good things. One thing ’Kieff showed today is he can run.”

The Jayhawks will travel to Arizona after practice today, play the Wildcats on Tuesday night, then arrive back in Lawrence at 5 a.m. on Christmas Eve. The players will head immediately to their hometowns for Christmas, then return late afternoon Dec. 27. The Jayhawks’ next home game is Dec. 30 versus Albany.

Because of final exams, the Owls didn’t arrive to Lawrence until 2 a.m. Saturday. ... KU has won 30 straight games in Allen. ... Self won his 150th game here against 34 losses. … KU led 13-2 just 41⁄2 minutes into the game. Temple rolled, 16-7, over the next 7:50. KU broke open the game with a 27-12 run from the 15:08 mark to 3:12. ... The Jayhawks shot 52.7 percent from the field, marking their second best percentage of the season. ... Dionte Christmas hit six threes, most by an opponent since Arizona’s Chase Budinger made six last November. Christmas’ five three-point makes in the second half marks the most since Texas’ Kevin Durant made five in the first half on March 3, 2007.

Budinger should be a real test for the KU bigs. He lit us up last year.

Yeah, and with AU losing to UNLV, they'll be wound up to play a big name and 'redeem' themselves. So I hope the guys are hungry and go in with a fighting attitude or they could have a beatdown put on them. Rock Chalk JayHawks!

Budinger is going to be a big test for Marcus. This is Marcus' chance to become a man. He can see if he can shut down a gun at D1.

I think Marcus will do alright when they are going head to head. What I am worrying about is Budinger moving without the ball. I'm afraid Marcus might lose him. KU is going to have to do a lot of communicating to keep track of him. We have a decent chance of pressuring their guards enough to keep the ball from getting to him. Collins and Taylor are quick enough. Another big worry is that this is the first road game for all our freshmen.

Last year Rush did a decent job and logged 30-minutes PT which was way over what he was supposed to have played comming back from his knee sugery. Zona knew it and took full advantage, cudo's. Another thing to consider is that sometimes to slow down a scoring threat you need to keep them busy on the defensive end so that they don't have energy offensively. Self needs to be sure the ball goes through his man and works Budinger at both ends of the court.Anyone else hate playing teams with feline mascots? I DO! Kick these kitties.....

That was the shortest post of the year for Jaybate. Well done! Hope all is ok.

Ummm, can the staff at KUSports.com please do something about the statistics page. M. Morris and M. Morris are a little hard to tell apart on the stat line. At this point we can assume Marcus is getting more minutes, so thats one way to tell. But as the season moves on it would be nice if you added a Mk. Morris and a Mc. Morris or something like that.