A sizable gathering of Jayhawk fans cheer during the first half against Temple.

KU routs Temple on the road

In which phase of the game was KU better against Temple? 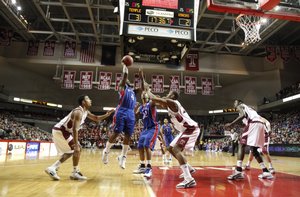 “Our guys were in tune, ready to play today,” Self said after his No. 1-ranked Jayhawks pounded No. 18 Temple, 84-52. “We’d not really been away from home and felt nervous going into a game. I think the success Temple has had made us feel that way and was good for us.

“I thought today for the first time we played this year ... it really didn’t matter who was out there. If Cole (Aldrich), Sherron (Collins) or Tyshawn (Taylor) wasn’t out there, it didn’t matter. Whoever was in there contributed and produced. A key for us is, because of our depth, Temple had a lot of guys play a lot of minutes. They may have been fatigued. We were pretty fresh. We didn’t have to play guys extra minutes.”

KU will meet Cornell at 7 p.m. Wednesday in Allen Fieldhouse.

KU shot 54.5 percent from the field. It marked the sixth consecutive game KU shot over 50 percent and 10th time this season. .. KU shot a season-high 89.5 percent (17-for-19) from the free-throw line. It marked the highest percentage by the Jayhawks with at least 10 attempts since KU shot 95 percent (19-of-20) versus Colorado on Jan. 21, 2009. ... KU has won eight games this season by 30 or more points. ... KU’s 40 first-half points were most scored in a half by a Temple foe this season. KU’s 84 points surpassed the previous high of 70 allowed by Temple versus Western Michigan. ... KU put up 84 points against a team that was leading the country in defense (54.2 ppg). ... Temple’s 22.6 percent field-goal shooting in the first half was the third-worst shooting percentage by a KU opponent this season. ... Temple scored just 16 points in the paint, second-fewest scored in the lane by a KU foe this season. KU had 42 points in the paint. ... Collins scored in double figures for the 10th time this season. His 14 points moved him into 17th place on KU’s all-time scoring list, passing Ron Kellogg with 1,509 career points. ... Marcus Morris, who had 13 points, reached double digits for the fourth-straight contest. ... Aldrich posted his third straight double-double and sixth of the season, with 10 points and 10 boards. ... Aldrich has led the team in rebounding 10 times this season and has 10 or more caroms in each of the last four games and eight times this year. ... Aldrich had three blocks and has had at least three rejections in his last five games. ... Taylor had a season-high-tying five boards. ... C.J. Henry scored six points in seven minutes. ... Tyrel Reed recorded three rebounds to tie a season high.

KU red-shirt Mario Little made the trip, but Travis Releford did not. Self said Releford wasn’t feeling well and skipped this road trip. Red-shirts can take part in warm-ups, but not play in games.

Blake Morris, older brother of Marcus and Markieff Morris who lives and works in Philly, gave some insight into how closely the out-of-state family members follow the Jayhawks.

“I mean, we mostly watch all the games on TV,” Blake said. “We’ve got family in Philadelphia and (Washington) D.C. A lot of family can’t get to see them in person. I think it meant a lot to them (brothers) to have so many family members here. It’s where they played, where they started out. They get much love here. It’s how it should be.”

Henry has played 59 minutes this season. He has scored 40 points, committed nine personal fouls and has two assists. He is 11-of-18 beyond the arc, 3-for-3 inside it.

You should specify "CJ" Henry in that last section...

The more I see of C.J. Henry, the more impressed I am. This young man can play! He's quick, athletic, handles the ball well, makes good decisions and can shoot the lights out! I'm not sure how, but Coach Self is going to have to find a way to get this kid more minutes. Watching him play, I found myself hoping that he would return next year. I could see his role expanding a great deal after Sherron leaves.

I agree with the take on CJ except his ball handling. I notice him fumbling it a bit in the open court so I wonder how his penetration skills are and how he handles it with a good defender on him. And like X, his defense is still a bit suspect. X needs to bear down and move his feet a little better. He gets beat on a baseline drive way too much for my liking.

hawk316 is spot on.....and he will only get better. He is probably still a bit rusty.

Oh yeah, definitely put his first name in there. I read that and was like "No way, X has loads more minutes and points than that."

Also, one should note that most of CJ's points are during garbage minutes when the game is in the bag. I think he does have potential and should maybe come into the rotation to give TT or SC some rest. He may have as much potential as Elijah. I am also guessing that CJ still isn't up to snuff due to that knee issue he was having. Come late Jan or early Feb, he may be even better. I think he'll become a factor later in March.

hawk316 - "I found myself hoping that he would return next year"

Shame on me for not being up to speed, but he's not going to the NBA next year. Is there some talk that CJ might not come back?

I agree that they needed to specify but it took me all of .0025 seconds to realize it was CJ... X surpassed 50 minutes by his second game.

melrank, I think I read somewhere on this site several months ago that both CJ and X hoped to be "one and done." It was a while ago, and I could be wrong about that. In any case, it is obvious that unless CJ's pt increases dramatically, he won't be going to the NBA any time soon. Undoubtedly, he would benefit from another year or two at KU to have more opportunity to showcase his skills. Considering that he hasn't played much basketball in several years due to his years in the Yankee organization and injuries, CJ has already demonstrated in his brief appearances that he is a quality talent. As Kennethst pointed out, he should only get better.

no way CJ is a one and done. just no way he gets the playing time this year for that. But darn, he sure looks smooth. Prettiest shot I've seen in a long time and he gets it off super quick.

CJ continues to impress me. His shot is pure and it has tickled the threads a lot. CJ may not see a lot of time this season but for the minutes he does see, he makes the most out of his time in the game. I think Self needs to work him into the game more--could be tough, though.

Chuck, we mentioned that yesterday after his one three at the top of the key and I replayed the game on TiVo this AM and watched that shot a couple of times - it's really amazing how fast he got the ball and shot it.

Both the Henrys are very unemotional on the court. I'm used to that from X by now, but does it look like CJ isn't as intense as what he could be?

CJ's emotions, or lack there of, don't bother me. hard to be psyched up for garbage minutes. Plus he's seen his share of big moments and I have no doubt that he knows how to handle it.

X's lack of emotional display I think is a sign of huge maturity. look at that thug Cousins from Kentucky, he should have been ejected for that elbow he threw to a guy's face while laying on the ground. I can't see X ever doing something like that and I wouldn't want someone like that on our team.

Couldn't agree more about the Cousin's type of attitude. He's definitely too thuggish for my liking. Is "thuggish" a word?

Fair enough about garbage minutes and no emotion is OK. I'm wondering about his intensity, though. It's hard to gauge intensity without open emotion from a seat in your living room. When you get beat on defense, don't dive for a loose ball, or have a defensive rebound ripped out of your hand under the basket giving up an easy two, I'd like to see the guy flinch - even if it's in the final minutes of a blow out.

Sherron is plenty mature, too. But, there is rarely any doubt about his intensity.

The obvious solution to the whole "minutes" problem is to start playing 4 and 5 OT games. The extra 20-25 minutes a game would go a long way to making the players happy and really juice their stats. : P

I don't think CJ lacks emotion/intensity. Maybe it comes across that way on TV, but if you watch his face during a game, you can tell he's playing hard to try to earn some respect and more PT. It's not a mistake that he had like 4 steals in 9 minutes the other day. Trying /too/ hard is actually what I would say his biggest fault is right now, occasionally putting up bad shots in order to show he can make them. I can't really fault him too much for that though, as he's just trying to prove himself. Pretty hard to argue with his percentages too. I do think, however, Self would be more impressed if he tried to make others better as well (only 2 assists in 59 min). Proving he can shoot probably isn't a terrible start though.

Maybe the reason he comes across as lacking intensity on TV is because of how smooth he plays. He is definitely the smoothest player on the team (and damn, what a pretty shot). Everything he does is completely fluid and therefore looks effortless. I promise it's not. Everyone I've talked to in our camping group has this same opinion. I think it would be nice if he could get some more minutes to try to showcase what he can do a bit more, but I don't think the reason he's not really getting them is necessarily something negative about him. I think a lot of it just has to do with the play of the people above him. Self may think CJ deserves more minutes (and has said so numerous times), but if he doesn't feel like the other guards deserve a reduction in minutes, then where are they going to come from?

In terms of him going pro, he obviously won't be going to the NBA after this year. He is getting older though, so eventually he will just have to make some money somewhere. He's probably not going to stay here until he's 27 to try to get drafted, he'll go play in Europe at some point if it's not looking like the NBA is a possibility. When that point will be, though, remains to be seen. I would say he'll probably at least stick around through next year to see if he can get some more PT. If things don't pan out though and he doesn't really see much increase in minutes, then he might just have to move on. Hopefully that doesn't happen though, because I think he could be pretty good, given the opportunity.

kmatlage, good analysis. In my earlier post I neglected to mention how smooth CJ is. In fact, that may be the term that describes him best. CJ Smooooooooth... I like it.