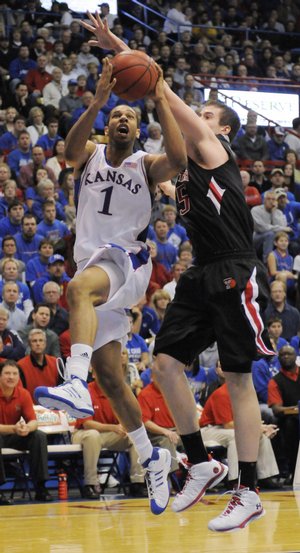 Scoring never has represented much of a problem for Texas Tech junior forward Mike Singletary.

In his first collegiate start two years ago, he finished with 15 points. He dropped 43 in a Big 12 tournament victory over Texas A&M last season, and so far this year has turned in 28-, 27- and 25-point performances as the Red Raiders’ leading scorer.

Which is what made Saturday’s outing — Singletary finished without a point on 0-for-4 shooting in a 89-63 road loss to Kansas University — so inexplicable.

“If you find out, let me know,” said Red Raiders coach Pat Knight, asked following the game what, exactly, Singletary’s problem was. “We’re having a hard time on the road the last couple times, and I think he presses himself too much. He knows we’re playing against Kansas, one of the best teams in the country, so I think he presses a little bit too much.”

If Singletary felt his coach’s analysis was accurate, however, it was impossible to know.

The player wasn’t made available to the media following the game — nor were any of his teammates — which left members of the winning team to explain how one of the Big 12’s top scorers left Allen Fieldhouse with a goose egg.

While Tech’s dismal performance can’t be attributed entirely to Singletary, it’s not a stretch to say that as Singletary has gone, so too have the Red Raiders (12-5 overall, 0-3 in the Big 12).

In the team’s five losses this season, he has averaged just 9.4 points — well below his season average of 15.4 — and without Singletary’s usual production Saturday, the Tech offense looked bleak, particularly during a first half in which the Red Raiders shot just 21 percent (5-for-24) and fell behind, 42-18, at halftime.

Since opening the season 12-2 and moving as high as 16th in the national polls, the Red Raiders have hit a rough patch, dropping five of their last eight and their first three Big 12 games.

I like Pat Knight. Some real special compliments at the end of this article. Pretty classy! Good luck to Tech the rest of the season.

It must have killed Anlter Arnett to write a story without the usual anti-Jayhawk sentiment. Thanks for finally doing your job Doogie.

K.U.'s energy and press in the first half through TT off balance. I would like to see K.U. perfect the press and use it more often. If it tires our starters out, send in our second group of starters.

the picture here of Pat Knight getting his technical foul, brought back the memory of that whole bizarre incident.

after watching the replay of the game back home, it confirmed my original suspicions we had while watching the game live. Coach Knight got his technical because he stormed the court after arguing that a couple of his players were fouled twice on the previous play...(he probably had a good point.)

at any rate, KU had the ball, a pass was thrown into the corner, and was knocked out of bounds...no doubt by aTTech player. the ref, Steve Wellmer, a good ref normally, called the play as TTech's ball.

Self immediately got upset with Wellmer and was right in his face by the KU bench. and during the whole time, the other refs were citing Knight for his technical.

Rules now say, that whatever the possession results are, that's whose ball it is after the T free throws are shot. it should have been KU's ball. but alas, they gave it to TTech. on the replay, you can clearly see Self mouth "it should be our ball."

Insignificant in a single 26 point blow out game, and definitely for the whole season, but there were some real strange calls yesterday. and this was one of them.

Is someone hinting about what they do in their free time? TMI.

Somebody with an avitar like your's, Jaminrawk, needn't be speculating about anybody else's free time activities!

Dude, it was a joke. And say what you will, but my avatar is hilarious.

Great to see Self finally try Withey & Cole together....

When the camera flashed to the TexasT bench, you could see Pat Knight yank up his Depends & think about running to the restroom for a quick Timeout....

Luckily for him the Tower experiment only lasted a minute (Cole was getting ready to have his final seat on the bench)...

But TexasT's D had absolutely nothing they could do...

"What if, I need to dominate a stretch of the game at some point down the road, what if big strong triple teaming zone defenses will back off of Cole a bit if another 7 foot dunking machine is on the other block.... what if Sherron can get the ball to either one of them, now that no one is triple teamed anymore... what if the opposing D is forced to play a true man to man now that I have two 7 footers in the game, spreading the post D out from under the basket... what if the other team can't get a shot off inside 15 feet per my two Mt Everest's Twin Brother shot blockers...