Who was KU's best player against Colorado?

This had odd air about it 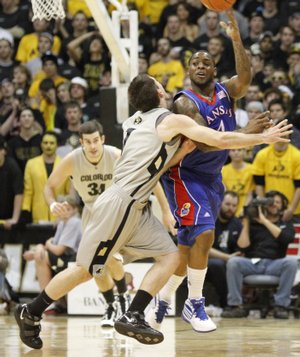 KUSports.com online editor Jesse Newell and Journal-World sports editor Tom Keegan take a look at what to expect from the Kansas basketball team's matchup against Colorado.

Boulder, Colo. — Before Wednesday, Colorado had never taken a No. 1-ranked team to overtime.

The Buffaloes still weren’t in a celebrating mood after falling, 72-66, to Kansas at the Coors Events Center.

“With a team like that, you’ve got to take the chances you have and take advantage of them,” CU guard Cory Higgins said. “We missed a big one at the end of regulation.”

With the game tied at 60, the Buffaloes had the ball with 38 seconds remaining, essentially giving them the opportunity for the last shot.

Following a timeout, CU attempted a ball screen for Higgins, but KU switched on it, which caused a traffic jam on the perimeter.

With the shot clock running down, Higgins hoisted a long three-pointer that only hit backboard.

Afterward, the junior regretted not at least attempting to drive.

“I think I waited too long, and the clock got too close to zero,” Higgins said, “and I ended up with that shot.”

CU coach Jeff Bzdelik said that settling for shots not only haunted his team at the end, it also was the main cause for the Buffaloes falling into a 21-8 hole in the first half.

“We took quick shots,” Bzdelik said. “First possession there, Marcus (Relphorde) took a quick three. Well, Kansas doesn’t want to guard our stuff. They hate that. So, you can’t accommodate them by taking quick shots and letting them off the hook. You need to make them defend.”

Later, CU was successful by freeing up its outside shooters.

“What we needed to do was (make them) defend — they’re an early help team — and kick,” Bzdelik said. “That’s something that was a key to tonight’s game, and we didn’t do it early on. We want to drive and make good decisions.”

After the game, Bzdelik said freshman guard Alec Burks, who sprained his left knee on Saturday, was cleared to play by doctors.

“I’m the one who said no, because he wasn’t 100 percent,” Bzdelik said. “He’s a young, talented guy. That was my decision. I want the risk when he steps back on the court to be as minimal as possible.”

Would Burks’ presence have made a difference Wednesday?

“Well, Kansas doesn’t want to guard our stuff. They hate that. So, you can’t accommodate them by taking quick shots and letting them off the hook. You need to make them defend.”

I appreciate Coach Bzdelik's candor and insight here. And while I in no was see it as trash talk (facts are facts) maybe Coach Self can rally the guys around it, and they can learn to relish defending that style when CU visits to The Phog.

I take that comment as unbelieveably arrogant. We hold them to less than 40%, are in the top 5 defensively in the country. I don't think the guys "hate" to defend at all.

Props to Bzdelik, the job he's doing at CU, and the performance by the Buffs last night. Now I'm hoping for increased focus from the 'Hawks.

Hate to defend?? What planet is this guy from? What a absolute stupid thing to say. that's a statement you sure don't want a player saying when they have to come to Lawrence much less the COACH!!! Watch out CU when you come to the Phog, we'll show you how we HATE to defend you!!

Guys, guys, guys. What he said was:

"Kansas doesn’t want to guard our stuff. They hate that." Not "Kansas hates to defend."

"Our stuff." That Princeton offense it a real drag. Running around and chasing guys playing that style in that altitude? Yeah, I'm sure the Jayhawks loved every second of it.

And I'll let you in on another little secret: Everyone hates guarding period.

Just because you are good at something doesn't mean you have to like it.

Take off the rose colored glasses.

He has a point. I'm not sure that saying we hate to defend is the right way to say it. They ran their offense, and didn't go for the score until late in the shot clock. They did more moving than other teams out there. We worked through it, however, it was apparent that all of their moving and screening wore the KU players out. When teams shoot quick, which increases the chance for misses, which leads to more offensive possessions for us, we like that. He was just saying that they made a point to not do that, and not help us out. So, what he should have said is, they are a great defensive team, and get their offense going by forcing teams in to quick shots....however, we (CU) didn't want to help them out, so we ran our offense in an effort to slow them down....

10point8 is right. Bzdelik's statement is true but maybe should be "has a hard time guarding our stuff." His comment about "an early help team" rings true too. How many times have you seen a screen at the top of the key with Cole lunging to help and our guard ending up chasing their player to the basket? I've been cringing over that for the last month. We played great defense on many possessions last night only to have them hit a shot as the clock expired.

i salivate at the prospect of playing Kentucky and humbling them and Calipari. That would be oh so sweet.

Every team we beat seems to "lament" something this year! Is it just me, or is that the only word sports journalist can come up with these days?

I pity whomever has to come up with adjectives to descirbe our opponents feelings after a defeat. They must have one large thesaurus.

I also agree with 10point8's clarification of Coach Bzdelik's comments.

Bzdelik is an impressive coach. I particularly like his decision not to play Burks because he wasn't quite 100%. That suggests that Bzdelik was more concerned about the health and the future of this young man than the outcome of a basketball game. Good for him. Not all coaches would have made the same decision.

"Even the 08 Champs were trying to remain consistent--especially guarding the 3pt shot...Its my favorite thing Self asks of his athletes is to shut down the opponent with great D."

Agreed. Oh, how I long for the days of consistent perimeter D ... or any perimeter D for that matter.

But, ya know what? These are still just kids. And I'm still very proud of the way they've played this season.

It was clear that K.U. was the better team, but give C.U. credit for playing with heart.