Iowa State forward Craig Brackins lowers his head after a turnover by the Cyclones during the first half, Saturday, Jan. 23, 2010 at Hilton Coliseum in Ames, Iowa. 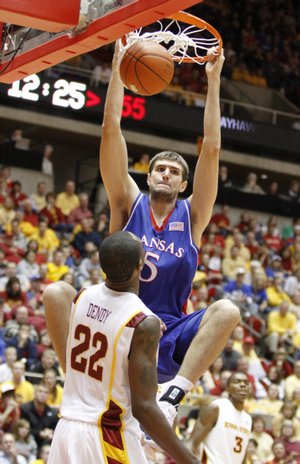 Which performance were you more pleased with in the KU-Iowa State game?

Who was KU's first-half MVP against Iowa State?

“When did you get a jump shot?” the ISU forward asked Morris on the court.

“He should be most improved player from last year,” Brackins said after KU’s 84-61 victory Saturday. “We’ve played teams already, and he’s just an all-complete player. He’s making jump shots, he can drive it a little bit. His aggressiveness ... we were talking a little bit on the court. He’s just a good guy. He plays hard, and he’s really improved.”

Brackins said the two continued their friendly banter throughout the game.

At one point, Brackins got to the basket by twirling around Morris.

“Hey, you’ve got to learn how to do something,” Brackins quipped back.

“He’s just a hard player,” Brackins said of Morris. “He loves to compete. He loves guarding me. He says it.

“We’ve talked off the court sometimes, and when we were walking away, he was just like, ‘Man, I love playing you. You bring the best out.’ Everybody loves to compete. That’s all it’s about.”

In just 19 minutes, Marcus finished with 16 points off 8-for-16 shooting to go with seven rebounds.

Brackins, meanwhile, scored 13 points on 5-for-13 shooting while having lots of defenders thrown at him.

Last year, when Brackins scored 42 points against KU, the Jayhawks double-teamed him once he received the ball in the post. This game, KU double-teamed Brackins every time he touched the ball.

After the game, Morris told Brackins: “Just keep working, man. You’re doing good. We had to double- and triple-(team) you, man. That’s what we have to do.”

“Sherron goes out there after we hand shake and says, ‘It’s all love. It’s all respect,’” Brackins said. “We all just respect each other. We’re all fans of each other. I watch him. He probably watches me. I watch other players in the Big 12 and all over the country. We just respect one another.”

Its good to hear they can go out and knock each other around but not lose perspective and show admiraton and respect for one another when it's over.

I have to admit last year I had some doubts about the twins, but they are vastly improved and seem to be getting better every game. That is what happens when you play in a great program. They are bigger, stronger, more skilled and smarter than they were a year ago.

Great story... there is so much hatred in this world---sometimes we lose perspective...

2 words. Danny Manning... and the hard work the Morris twins have obviously put into the their game. Those guys are going to be a force to reckon with next year.

Word. Thats the way it should be.

Brackins is a class act. He would have looked better yesterday in Crimson and Blue.

Right on rc80, you nailed it. Great article.........and jhwkfan, the way we get our revenge is by continuing to completely dominate ISU. Nothing more is needed.

Great story. Great sportsmanship--unfortunately, it is lacking in the world of sports. Glad to have the twins and Sherron on our side, with the best coach in America guiding the ship. And finally, I have to agree--Danny Manning is the unsung hero in all this because it is he that made the twins and our other bigs much improved from last year!

If im an NBA Scout..i'm looking at comments like that from Brackins and think hes not going to go out and win games for me. You think Kobe ever tells the opposing player hes balling?

I could see Kobe telling LeBron he was ballin!

Markster956, there's a mutual respect and camaraderie felt by combatants in athletics, as long as the individuals involved are not dirty players or have "an attitude." That is how it should be. Have you ever watched NFL players laugh and embrace after they have tried to beat each other's brains in during a game? Life is much more than a game or a win or loss. It's about relationships and treating each other with dignity and respect.

Ralster.... that was started by Marquis in the first half.... on his FIRST dunk on Cole.... he did a single wing gun salute... and doubled barrelled it in the second half.....

Sherron's a competitior and ANY slight he uses.

Infairness.... those were two amazing Dunks BY Marquis and hope he gets his 6th year, I enjoy watching him play. he's a very talented player and I won't slight him for showmanship. That's not the Kansas way ( Tyshawn! ) but those were incredibly athletic plays.

As for Brackens, Class act. Incredible Player. They desperately need a point guard in games like this. IF they had someone who could deliver the ball to Backens inside Instead of making him get his own shot, this game would have been alot closer, but going forward... Even with the lack of Players, Iowa State brought game.

markster956 (anonymous) says... If im an NBA Scout..i'm looking at comments like that from Brackins and think hes not going to go out and win games for me. You think Kobe ever tells the opposing player hes balling? -

Dude, I'm sure Tim Duncan said a few things like that on the court when he was playign against good teammates and still does.... NBA gm's actually would rather deal with someone who is too nice ( Battier, Duncan..... ) than someone who they have to worry about getting into fights on the court....

Brackins is a great kid. Great to hear how improved he sees Marcus as being. He really has made huge strides. I posted the following earlier, & it's not to demean Marcus's ability. I just see severe chances to expose other team's weaknesses with our crazy depth:

There are certain simple offensive sets we could absolutely dominate teams with. I'm talking sets we all ran as fifth graders. Two big men, swinging side to side on the blocks, Cole up down low & Withey up high.

Takes five seconds to learn & one minute to practice for gametime -- when you are loaded with height, skills and athleticism, one should always make us of the simple credo:

"The simplest way is usually the best."

in this set I would see three guards outside, just like we all learned in grade school, swinging the ball around looking for one thing -- an open seven footer to throw an alley oop. With Cole now not double teamed, everything opens up.

In relation only to quality minutes, where the players have thrown very few turnovers, played tough D & remembered to box out, & overall been great teamates, I would use the above offensive set for 5 minutes per half, with the following players:

All of these players we can count on -- and it comes down to matchups. 5 minutes per half of this combined with another 10 minutes per half of the 2nd team led by the Xman, pump faking, driving in for layups (& not 3 pointers), leading his troops, playing pressure D would drive an opposing coach NUTS!!!!

I'm the point guard and i just brought you down like a receiver acrossed the middle Popeye !

We should never have a problem getting quality big men with DM on the staff. I would think if a big man were truely serious about developing his game and getting into the league I don't see how KU isn't on you short list. The proof is on the court. until Shaq retires and gets an assistant coaching job I would think Lawrence would be right there.

This is why people hate your dumb a$$.

Posting the exact same 1000 word post on 3 differnt articles within 7 minutes of each other?

Glad you know how to Ctrl-C...Ctrl-V

rckchaldjeff, Seriously "this is why people hate you dumb a$$". 100 is pretty well respected and that was just uncalled for man.

It's so great to hear players talking about love and respect for eachother and being encouraging to eachother. Isn't that what intercollegiate athletics are all about.