Missouri guard Zaire Taylor hangs his head on the bench as time dwindles in the second half, Saturday, March 6, 2010 at Mizzou Arena.

What was KU's most impressive road victory this season? 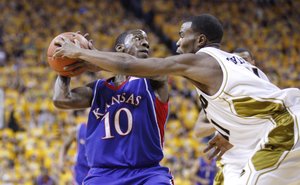 Columbia, Mo. — Sure, Kansas University has lost only twice this season and will be the new No. 1 in the polls Monday.

That still didn’t make Saturday’s 77-56 loss to the Jayhawks any easier to take for Missouri senior guard Zaire Taylor.

“They’re one of the best teams in the country, but we can compete with anybody, and we can beat anybody in the country,” Taylor said. “So I wouldn’t say you have to keep (the loss) in perspective, like they’re on another level or another skill higher than us, because I don’t feel that way. They’re a good team, and we’re a good team.

“Today, they were the better team. Tomorrow if we play, they might not be. And that is yet to be seen. I guess we’re going to have to play again.”

Taylor, who scored five points on 2-for-9 shooting in his final home game, continued to back his teammates later in the postgame news conference.

“Some people are ranked All-American, some people aren’t. Some people are five stars. Some people are three,” Taylor said. “But, I mean, I don’t know what kind of stars I had. I never see myself ranked on any kind of top 100 or anything like that. But I know, if you put someone in front of me, they could be No. 1, 2 or 3, and me and him are going to go at it.

“If you don’t know our names, I don’t know if anybody’s going to be able to tell between the five-star and the no-name. I feel like we’ve got a bunch of guys like that on our team with that attitude, and I think we resemble our coach.”

Though MU likely won’t have a player on either the All-Big 12’s first or second teams announced today, the Tigers still have compiled a 22-9 record and appear to be a lock for an NCAA Tournament bid.

Mike Anderson’s squad, which was picked seventh in the preseason Big 12 poll, finished fifth with a 10-6 conference record — one game out of a tie for second.

Coming into the contest, the Tigers were second nationally in bench scoring, averaging 33.9 points from that unit. In 25 of their 30 games, the Tigers had at least one bench player score in double figures.

Against KU, the Tigers’ reserves mustered just eight points — their worst output of the season — on 4-for-16 shooting from the floor and 0-for-7 on threes.

The Tigers, who came in hitting 38 percent of their three-pointers this year, also went just 3-for-22 (13.6 percent) from beyond the arc.

“As you can see, we were getting open looks,” MU senior J.T. Tiller said. “… That’s just the luck of the draw of the night. We just couldn’t knock down open shots.”

"Today, they were the better team. Tomorrow if we play, they might not be. And that is yet to be seen. I guess we’re going to have to play again." Doesn't Zaire know that they already did play us this year and, like yesterday, we beat them like the inferior team they are? Either his memory is failing him, or he's battling Cleopatra for Queen of Denial. I guess in his mind, he is a McDonalds All American with a national championship ring. Too bad there's not enough room in his mind to play the Big 12 Championship in there. Mizzou might win. But in the real world, his Tigers' average margin of defeat this year to KU has been 20 points. Not exactly stellar performance.

“I guess we’re going to have to play again.” Not! Mizzou will not get pass Nebraska in the Big 12 Tournament.

The Tigers, who came in hitting 38 percent of their three-pointers this year, also went just 3-for-22 (13.6 percent) from beyond the arc.

This is the stat that gives me cause and concern, we hit some Alice Wonderland University that reverses and hits 16 of 22 from the arc. gets hot from FG%.

tdomine......"Too bad there's not enough room in his mind to play the Big 12 Championship in there."

Die Mizzou! Deny all you want (liked the "Nile" comment) Denial is not just a river in Egypt. It all starts with a coach. It looks like Mike Anderson is not the guy to bring the program around. Maybe Stepanovich should enroll again and that guard from Blue Springs--you know the announcer who engages in the same type of blather that Zaire Taylor spouted in this article. KU outsmarted MU when Roy gave Norm the chair and he obligingly sat down. MU is the school that got rid of Norm, the only coach to bring the program some success.

Q: Why does a Tiger lick is wounds? A: Why not? What else does he have to lick.

Q: Why does a Tiger lick his wounds? A: Why not? What else does he have to lick.

I think Anderson is a good enough coach, but his system stinks. To make it work he has to recruit small, quick guys who are always going to lose out to a team with good inside players. He needs to modify the system a little.

Duh...One of their starters is done for the season (Safford), so one of the bench players is now starting...so it would seem reasonable that bench scoring would go down, regardless...

I don't think you can blame his system when he took a team deep in the tourny last year with very few big time recruits. I actually don't mind coach Anderson.

On another note; Missouri has to be the ugliest bunch of guys. Holy crap. Misshapen heads, bug eyes, it's almost as distracting as that annoying S-C-O-R-E chant they wouldn't stop yelling.

tdomine...you beat me to it.

“Today, they were the better team. Tomorrow if we play, they might not be. And that is yet to be seen. I guess we’re going to have to play again.”

Two games. Average margin of victory: 20 points. Yeah...let's play again. It's fun to beat the crap out of your arch rival.

Zaire Taylor may be delusional, but read some of the missery message boards... it's all a refereeing conspriacy,,, Marcus faked the head injury to change momentum,,, all of KU's players cheated thru high school,,, Cole is a dirty player,,,

Although the missery fans are a sorry lot, I actually like Mike Anderson. He is a classy guy and he keeps MU mediocre.

All we've heard from KSU and MU fan this week is how KU got all the calls. KSU is probably the most physical team in the country. They play thug ball. To be fair, we play a little thug ball ourselves. I'm not being critical of physical play. I believe you have to be physical in basketball today to be successful. But if you're going to play that way, you're going to have a lot of fouls called against you.

In the KSU game I think there was only one foul difference between the two teams. I don't know how you could complain about home cooking when there is a one foul difference, yet that's all we've heard from their fans all week. Their fans didn't seem to notice when rebounding how their players used their hands and arms to push and shove their way to the ball, and used our players as ladders, climbing up our backs to get to rebounds. In fairness, I thought KU-KSU was a horribly officiated game, but calls were missed both ways.

I have been a basketball referee, and I tend to be very forgiving of missed calls, because I realize that Refs can't call everything, even it they would like to. The game has evolved to the point where refereeing is really more about managing caos, and trying to make sure you catch the calls on plays where a competitive advantage has been created by the foul. Thirty years ago I really believe it was possible to call a perfect game. Since John Thompson's Georgetown teams introduced thug ball, that's no longer realistically possible. All you can do is try to call a balanced game, and catch the obvious violations.

As for MU, they trive on hacking ball handlers to get steals. To them, the forearm is part of the ball. They thrive on ripping a players arm away from the ball. That can be a successful style of basketball, and I'm not being critical of that style of play either. But, once again, if you play that style of ball you're going to get a lot of fouls called agains you. Unlike the KSU game, I thought the game yesterday was actually pretty well officiated.

The difference in the three fan bases is that most KU fans seem to understand that by playing physical basketball means we're going to have a lot of fouls called against us. That's just something you accept. Sure, we boo the flagrantly missed calls, but nomally not the marginal calls. KSU fans boo everything that goes against them. The average KSU and MU fan doesn't have a high enough basketball IQ to distinguish the difference. It also helps that we own KSU and MU, so we don't have to find excuses to cover up our team's short comings. There are definiely inferiority complexes at play here as well.

Im not really sure what this article is about. I got lost about halfway through that speech from Taylor and didnt think to leave a trail of breadcrumbs to find my way back.

The only thing I really got from it was they think they are on the same level as KU talent-wise. I was hearing that from all of the Mizzou fans leading up to the game, thankfully they have either gone silent or are now attempting to argue that KSU isnt second best using the same twisted logic they were using to say that KU isnt the obviously superior team in the Big 12.