Kansas teammates Marcus Morris and Tyshawn Taylor (10) celebrate a Morris bucket in the second half, Saturday, Feb. 6, 2010 at Allen Fieldhouse. 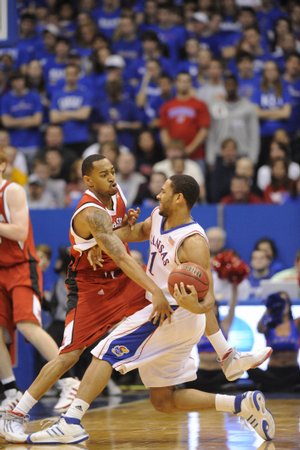 Who played best in the second half of KU's 75-64 victory over Nebraska?

Which KU big man off the bench played better in the first half?

Kansas University’s basketball team had a so-so week, claiming an overtime victory at Colorado on Wednesday and 75-64 decision over Nebraska on Saturday in Allen Fieldhouse.

It’s nothing to be concerned about, junior center Cole Aldrich said after his eight-point, six-rebound effort against NU.

He said Self does that “usually toward the beginning (of season). You’ve got to find ways to win,” Aldrich stressed. “I think we haven’t played spectacular defense by any means, so that’s one thing we've got to get back to doing is moving our feet and playing good defense because that’s going to win us a lot of games.”

Self picked up a technical foul the first half. It was a game both Self and NU’s Doc Sadler appeared enraged over the officiating. Sadler stopped to speak with KU athletic director Lew Perkins after the game, apparently discussing the work of the officials.

NCAA officials recognized former KU athletic director Bob Frederick as the inaugural winner of the NCAA’s administrator’s sportsmanship award at halftime. The NCAA’s John Blanchard and Robert Vowels made the presentation to Frederick’s widow, Margey. The award goes to an NCAA administrator who “shows the highest respect for intercollegiate athletics, demonstrates respect for competition, student-athletes, coaches and officials, and encourages student-athletes to demonstrate positive sportsmanship and integrity.”

The NCAA officials announced Saturday that the award would be named after Frederick.

KU coach Self ripped into the Jayhawks during a timeout early in the second half with NU up, 43-39. The Jayhawks immediately responded on a 28-5 roll.

“He knows how to get you going,” guard Sherron Collins said. “He challenged us, and we responded. It wasn’t no milk and cookies. Him jumping on us was something we needed. He’s a good motivator and that’s what he did. He motivated us.”

KU extended the country’s No. 1 homecourt win streak to 55 games, which ties as the second longest in KU history. ... KU has won 15 straight versus NU. ... KU leads the all-time series 168-71, including a 50-7 mark in Allen. ... After KU led 37-33 at halftime, Nebraska took a 43-39 lead, marking the first time KU has blown a halftime lead this season. ... Brady Morningstar dished four assists, marking the 10th game he has had three assists or more. .... With his four three-pointers, Collins moved into fourth place on KU’s all-time three-point field goal list. He has 208. ... Collins had six assists and moved into ninth place with 489 on Kansas’ career assists list past Ryan Robertson (1996-99).

You just have to love Self's mentality. Defense every game no matter what as in some games the shots will not fall. Roy didn't rely on 'd' as much. Run and gun. Although coming back from a first half deficit is fun, not coming back from a first half deficit sucked. Nor was it fun trading shots down the stretch while trying to close the gap. Self's teams are not immune to a lack of focus on the defensive end but for the most part they contain the opposing team well. It makes for better consistency, longer home winning streaks, more conference titles, deeper tournament runs, etc.

I dont' want self to be president, because then he couldn't be our basketball coach anymore!!!!!

He could do both.

Jeff Withey impressed me as much as anybody against NU.

The plan may be to bring him on slowly near the end of the season and use him as a surprise in the Big 12 and NCAA tournaments. He could be an impact player more so than TRob. However, yesterday, TRob did more positive thinks than negative for once in his minutes. Just think about next year, Withey, Morris and Morris, Robinson! Great front line!

memhawk..lets all keep posting for Cole's benefit how fantastic graduation is

and that he is so close and an all Big 12 Academic Award winner he would be an inspiration for every kid in America and the NBA will always be there and his parents would be so proud and all his teammates would come back.{ Sherron could come back as his long lost twin brother Derron} and he could win three NC's

memhawk..lets all keep posting for Cole's benefit how fantastic graduation is

and that he is so close and an all Big 12 Academic Award winner he would be an inspiration for every kid in America and the NBA will always be there and his parents would be so proud and all his teammates would come back.{ Sherron could come back as his long lost twin brother Derron} and he could win three NC's

OOPS...I guess my long lost twin was dreaming too!!

Maybe, before she died, Cole made his grandmother a promise that he would graduate. We can only hope!

Very few NBA bound players that have left college before graduating have had the academic sucess that Cole has had. Seems like a waste to have acheived such a good standing as Cole has and leave it on the table. Usually, it seems like the ones who left college early for the league would have struggled to have gotten a degree. They probably were better off for leaving early. Cole can only improve his stock by staying, not decrease it. The league will be there. The money will be there. The dental benefits will be there.

Cole - have some more fun compliments of the State of Kansas. You'll still be tall, you'll still be a blocking machine, you'll still have one (and maybe two or three) NCAA championship rings. Plus, you'll have a degree from KU!