Off to a fast start

Who do you think is KU's best perimeter defender? 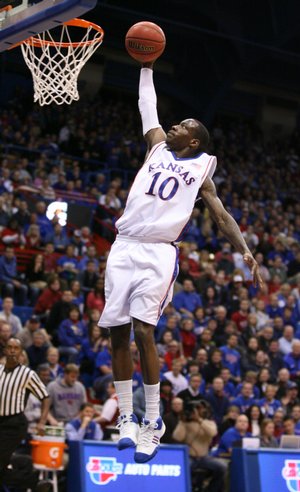 Wednesday was quite the night for Radford senior Joey Lynch-Flohr.

Too bad he could barely enjoy it.

Playing in front one of the biggest crowds of his life, in one of the most historic buildings he has been in, against the top-ranked team in the nation, Lynch-Flohr poured in a career-high 26 points during the Highlanders’ 99-64 loss to Kansas University.

“That’s nice,” Lynch-Flohr said. “Individually, I can take that away from this. I’m glad I could do that. And I’m also glad that my parents flew in from Virginia to see it.”

For a while, it looked as if Lynch-Flohr were working on developing a new nickname: Captain Hook. Six of the nine shots he made Wednesday came via the old-school hook shot, a personal favorite that Lynch-Flohr has used since his senior season in high school.

“Joey loves that shot,” Radford coach Brad Greenberg said. “He works on it all the time and has surprising range with it. It’s just a credit to how hard he works.”

In making nine of 14 shots from the floor, the 6-foot-8 forward, who spent time this summer working out with Kansas guard Brady Morningstar in San Francisco, also took and made the first collegiate three-pointer of his career.

“It was just one of those nights,” he said. “There were some positives, but you can’t take too much away when you lose by that many points.”

The Highlanders (4-3) were overmatched all night. Whether it was Kansas’ size and depth, relentless defense or silky-smooth, second-half shooting, the Highlanders had few answers for the Jayhawks, who moved to 8-0 on the season. One such answer came in the form of 6-11, 260-pound center Art Parakhouski, who came in leading the nation in rebounds per game and left with 13 more to his credit. Parakhouski, a potential NBA Draft pick, finished with 21 points and two blocks to go along with his 13 rebounds. According to him, though, none of them came easily.

“They did a pretty good job to keep me out of the paint in the first half. I was struggling,” Parakhouski said.

His biggest roadblock proved to be KU’s aggressive double-teams.

“I didn’t expect that,” he said. “I thought I would get the ball, and it would just be me against Cole. I did not expect to be double-teamed at all. Kansas is a great team, and this experience is going to help me a lot because, in the Big South, we don’t have big guys like that.”

Playing a tough opponent was nothing new for the Highlanders. Last year in the first round of the NCAA Tournament, 16th-seeded Radford drew top seed and eventual-national champion North Carolina. The Tar Heels battered the Highlanders, 101-58. Earlier this season, Radford traveled to Cameron Indoor Stadium and lost to Duke by 37.

KU hung 63 points on the Highlanders during the second 20 minutes, turning a 36-18 halftime advantage into the latest on a growing list of Allen Fieldhouse blowouts.

“I think Kansas was tougher than Duke,” Parakhouski said. “Duke, their guards do more of their scoring. But Kansas is more balanced.”

Lynch-Flohr's jump hook was sick. It was good that the bigs got to see it a bunch. Maybe they can develop it as well, b/c there isn't much that can stop it.

Who was (not) guarding Lynch-Flohr?

First, Frank Davis (Tenn Tech) and now, Joey Lynch-Flohr get career points against the #1 team in the country AND at AFH. Granted, Joey was one of the Big South conference preseason all-conference players. There's no lock-down perimeter defender on this team yet.

Lynch-Flohr is NBA ready. He is a rough, hard playing sucker with abundant skill. The refs seemed to like him. They gave him about 12 extra fouls.

I missed the game....was Lynch-Flohr shooting that hook shot from the perimeter? did he use it for the three as well ;-)

The hook shot is hard to defend...the best way to defend it is deny the shooter the ball to start with, but the double team on Art Parakhouski, made that even more difficult.

Jaybate- We threw Kief and Robinson at him. He's just a good shooter. This Radford team reminds me a little of Davidson. They are observant and smart. They were just outmatched.

“I think Kansas was tougher than Duke,” Parakhouski said. “Duke, their guards do more of their scoring. But Kansas is more balanced.”

This is pretty good insight from a future NBA player. It's also good to hear from a player that scored all his points in the second half. Parakhouski and Lynch-Flohr are by far their two best players. They will do damage in the Big South. I respect both these guys.

We have one of the best hook shot shooters sitting in a suit at the top end of our bench. Danny Manning's hook devasted teams, especially Oklahoma in the finals. I've seen a little of his shot coming out in our guys this year. Keep working with D-man guys and just soak it up!

He wasn't shooting his hook from the perimeter. It was usually about 5-8 feet out, and as I recall most of them were from the right side of the lane, usually near the baseline. Very smooth shot and he looked really polished. As jpstrayer mentioned, I think one of the biggest things that we were focusing on the double-teams. I don't think it was so much KU playing poor defense as it was Lynch-Flohr being a very good player.