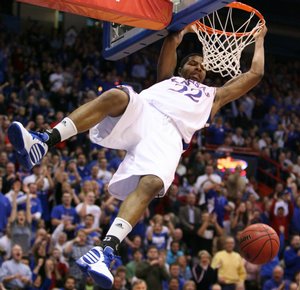 For a short while Tuesday night, it looked like California might be the team to snap the Kansas University men’s basketball team’s streak of 48 consecutive home victories.

In the end, though, Cal learned the hard way that when taking on the Jayhawks at Allen Fieldhouse — even on a night in which a large majority of the student body is AWOL for the holidays —the margin for error is nearly non-existent.

“They get two, three, four baskets during one stretch there,” said Cal coach Mike Montgomery, whose team fell, 84-69. “And there wasn’t a whole lot we could do.”

For Cal, Tuesday’s loss proved an especially disappointing outcome given the fact that, despite the lopsided outcome, the Bears outplayed the Jayhawks about two-thirds of the game.

Cal led by as many as six early on, and with 7:29 remaining in the second half, trailed by just five in what was still very much anyone’s game.

Forward Jamal Boykin provided a boost inside, finishing with 15 points and a career-high 15 rebounds.

Guard Patrick Christopher led all scorers with 21 points on 9-of-18 shooting, and Cal played with an impressive first-half intensity, taking an early lead and holding on to it for the majority of the game’s first 20 minutes.

In the end, though, California — like so many of the teams that have came through Allen Fieldhouse during what is now a 49-game home winning streak — was just a tease.

Even though they were bolstered by a stellar first half, when it seemed all of their off-balance, fall-away jumpers from just inside the three-point arc were dropping and KU struggled to get into a rhythm offensively, the Bears could never grab hold of the momentum, could never piece together a significant run when they really needed it.

As a result, when Kansas went on an 11-2 run late in the second half — a rather modest run by KU standards — it was more than enough to sink the Bears.

“Every time they made a run, we said, ‘We’re only down seven, we’re only down eight,’” said Boykin. “There was still enough time and we have so many shooters, if we could have hit some threes and if guys were executing and playing good defense, we could have gotten back in the game.

“(But) they did a really good job of maintaining their intensity after they made their run.”

For the first time all season, the Bears were held under 70 points, leaving Lawrence with a 6-4 record heading into a five-day holiday break.

“We didn’t hold it down on the defensive end,” said Christopher. “They kind of did everything they wanted to. When you’re trading baskets like that, when you make a mistake, they’re going to capitalize on it.”

"For Cal, Tuesday’s loss proved an especially disappointing outcome given the fact that, despite the lopsided outcome, the Bears outplayed the Jayhawks about two-thirds of the game." - Dugan Arnett

dakotaloomis - all you are doing is taking Doogie's bait. I guarantee he stuck that comment in there and made a side bet with his Mizzou buddies that someone would comment on it. I can see the satisfied smirk on his face, nodding his head as he read your comment.

You hear that Doogie? We will not be your marionettes! We are free men! : )

Ok, somebody help me out. Our home winning streak stands at 49. What is the overall record for consecutive home wins at AFH? Are we even close to it? Just curious what the number might be.

"You hear that Doogie? We will not be your marionettes! We are free men! : )"

Probably my favorite comment of 2009. Just in under the wire. Congrats.

The record was set more in the mid-to-late 90s, though I don't know exactly how many games. Raef Lafrentz and the class of 1998 never lost at home, so it began sometime before the '94-'95 season and ended sometime after the '97-'98 season.

That's correct--the school home winning streak record is 62 consecutive games in Allen, from February 1994 to December 1998. Previous to that, KU had a 55-game streak under Larry Brown that was snapped during the 1988 championship season--Kansas actually lost three at home that year, to K-State, Duke, and Oklahoma, then avenged each loss in succession during the NCAA Tournament in the Elite Eight, Final Four, and National Championship games.

Not to get too sidetracked, but I loved this quote from Dexter Pittman to Ed Davis yesterday:

"It got so ugly that Pittman said North Carolina’s long and talented sophomore, big man Ed Davis, asked him at one point late in the game if he could take it easy on them in the paint.

Thanks for the info on the streak. Not putting the carriage in front of the horse and looking ahead, even if we win the rest of our home games this season, the streak would stand at 59, three away from tying it. If the streak stays alive for next season, it would still be an incredible feat. Hopefully, something to forward to!

Jaminrawk, where did you see that at? Sounds pretty awesome. I missed it.

starters for next year tentaively

*- Morningstar's starter spot will be dependant on who we bring in via the performace of elijah and royce.... it could go to ANYONE, but i give the edge to Brady as a senior.

**- Highly dependant on Marcus getting drafted as a " project" player.... based on past performance of Players in their sophomore year developing ( darrell Arthur mostly )... i would expect him back for his junior year before he jumps pro

*** Markieff should definetely be back next year, all though im not sure how much longer HE will be a hawk if his development ocntinues..... If not 'Kieff then it's thomas RObinson, and If we see the improvement from TROB that we have seen through the Morris this year.... TRob will be in AA next year.

You got it all figured out--thanks!