Familiar faces float around the northern student section of Allen Fieldhouse during the first half.

Which of these four freshmen do you think will increase their minutes most as the season progresses?

Who do you believe is KU's player of the decade? 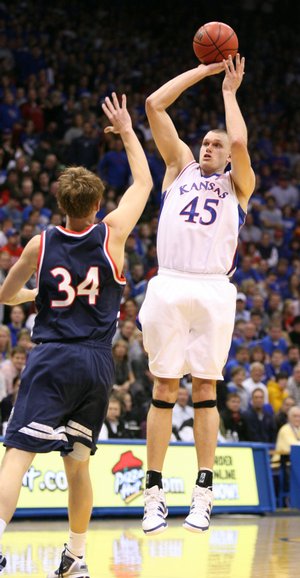 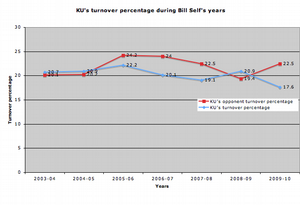 “I did pretty well. I finished with a 3.32 (overall grade-point average). Now I just need to get some media votes,” Aldrich said after Tuesday’s victory over Belmont.

The junior pivot recently told the Journal-World of his dream to become KU’s first Academic All-American since Ryan Robertson (1999).

To be eligible, he needed to increase his overall GPA from 3.2 to 3.3.

KU won its 50th straight in Allen Fieldhouse. The school record is 62.

“It’s a great feat,” Aldrich said. “We love playing in the fieldhouse, where our fans help our home-court advantage so much. We’re just trying to win games, at home and on the road.”

Fans sang “Happy Birthday” to birthday boy Mario Little as he entered the autograph line after the game. ... KU has held 86 straight opponents to sub-50 percent shooting. ... KU has won by 30 or more points seven times in 12 games. ... Aldrich had a season-best six blocks. He has 19 blocks in his last four games. ... Aldrich moved into 18th on KU’s all-time rebound list (627), passing Norm Cook. ... Sherron Collins moved ahead of Tony Guy and is tied with Bud Stallworth for 19th on KU’s all-time scoring list (1,495 points). ... Tyshawn Taylor has 29 assists and three turnovers over his last five games. ... Belmont’s 23 turnovers were a season high for a KU foe.