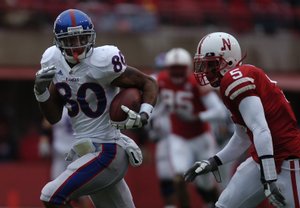 ¢ Dezmon Briscoe had six catches for 176 yards and a touchdown, and many of the yards came after the catch.

¢ James Holt had a nation-leading sixth forced fumble and an interception.

¢ Marcus Herford continued to struggle as a kick returner, including fielding one that was headed out of bounds, and was flagged for an illegal block in a rare appearance on offense.

our biggest disappintment this year is our kicking game. it's basically been non existent. No returns, and essentially our punter or kicker gets out performed each week. it's really been the true weakness of the team...and last year, such a strength. Our defense is down a notch sure, but our kicking game is down several. we have 3 weeks to get it together.