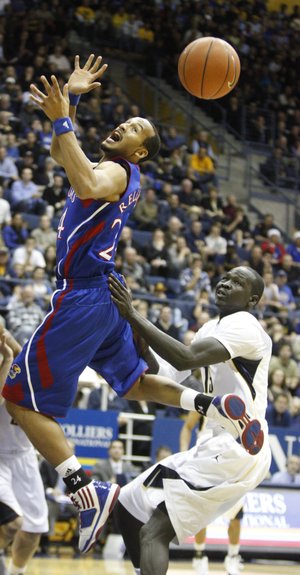 The 4,000 alumni in the Bay Area call themselves the “Bayhawks.”

“This is a once-in-a-lifetime thing. I bought a block of 20 tickets,” said Weidling, senior human resources business partner for Bayer Health Care in Berkeley. “Some in our block are Cal fans. I told them they have to be KU fans for a day,” added Weidling, who attended a pre-game party for Jayhawk fans at Meridian International Sports Cafe in Berkeley.

“It’s the biggest nonconference game Cal has ever had in Berkeley.”

The Dons are in a tournament in Las Vegas this week.

“We had a KU Alumni Night for the San Francisco-Colorado game. It was Rex versus Tad Boyle,” Weidling said of the game pitting teams coached by former KU guards. San Francisco beat Boyle’s Buffs, 82-80, in overtime on Nov. 20.

“We had 36 Jayhawks there. I think the fans were really impressed with the coaching. Rex is very fan-friendly. If you pay $100 you are a member of Rex’s Sixth-Man club. He talks to the fans before the game. It’s a great deal. He’ll discuss his game plan and everything.”

Daniels update: DeAndre Daniels, a 6-8 senior forward from IMG Academy in Bradenton, Fla., will visit the University of Texas on Monday, Rivals.com reports. Daniels has visited KU, Kentucky and Oregon. He told Rivals he likely will take a fifth and final visit. Candidates for that visit: Florida, Alabama, Arizona State, Baylor and North Carolina State. Daniels has said he’d like to attend college second semester of this school year, but just practice and not play in games until the 2011-12 season. He is the No. 9-ranked player in the recruiting class of 2011.

Self attends game of Ashley: Self has been not only coaching his team, but recruiting on this trip to California.

Self on Tuesday attended a game of Brandon Ashley, a 6-8 junior power forward from Bishop O’Dowd High in Oakland. Ashley, the No. 6-prospect in the Class of 2012, had 14 points, five rebounds and three blocks in a win over previously unbeaten Berkeley High. The Contra Costa Times reported that Cal coach Mike Montgomery and Washington’s Lorenzo Romar also attended.

McLemore MOP: Ben McLemore, a 6-5 senior forward from Oak Hill Academy in Mouth of Wilson, Va., was named most outstanding player of this week’s Iolani Classic in Hawaii. McLemore, who is Rivals.com’s No. 17-rated player, has said he hopes to orally commit to KU or Missouri over his Christmas break. Recruiting analysts say McLemore wants to attend KU, but his mom has not yet OK’ed the decision.

One big family: KU assistant coach Kurtis Townsend, who grew up in the Bay Area and served as an assistant coach at Cal, had several family members and friends in the stands.

“I asked Kurtis, ‘How many tickets do you need?’ He said, ‘I don’t know. Twenty-eight?’’’ Bill Self said in his pre-game radio interview with the Jayhawk Network. “I said 28?’ He has a big family.

“I’m sure it’s been good for him to come out here and spend a couple days with his family before the holidays.”

If true, aren't you jealous?

what kind of mom is Mrs. McLemore.....Ben's dream has been to be a jayhawk....and mom hasn't ok'd it???? holding off her kids dream because people at the office want him to rep missouri? She doesn't sound like no Maeshon Witherspoon

Careful! No need to offend the kid's mom. I suggest we all chant "Mac Le More" at the next game (UT Arlington), if Ben has not announced by then. Let mom know that we do care and want Ben to be a Jayhawk.

Do you think there may be someone whispering $$$ in her ear? For the sake of her son's chance at the KU experience, I hope she realizes how deep that kind of hole can be.

I think people need to chill on McLemore's mom comments. No one knows what's going on in spite of "rumors" she dislikes KU or anything. The fact is that KU is obviously the more prestigious program. Greatness wants the biggest stage. If he ends up at MIZZOU and doesn't want to be there, I'm sure KU vs. MU games will become very awkward when KU beats them like always.

I suggest we treat as a troll anyone who makes comments about recruits' parents. It's unfair and it can only hurt recruiting.

drgnslayr, that's what I'm thinking, too. It may be nothing more than mom wants her son closer to home. Any parent can relate to those sentiments. At the same time, it's obviously important to consider all factors in this kind of decision. The fact that Ben really wants to come to KU should be weighted very heavily (after all, it IS his life) and how it should help him in the future. But that's easy for us to say. Not so easy on mom.

B Mac's mom is a big fan of B Mac. She wants nothing more than to be able to watch every game he plays in high school and college. MU happens to be a lot closer to St. Louis than KU and that's the only reason she's holding him back. She doesn't make big money so she can't take off work to drive to KU and watch him play every other day, but the drive to MU would be managable and she wouldn't have to miss work to see him.

She was against the decision for him to go to Oak Hill because she never gets to see him play anymore and now she's worried that she won't be able to go to his college games either. She isn't against KU in any way other than it's not close enough to home. From what I've heard she's a classy, loving mother, who just wants to see her son play. I think she'll let Ben come to KU and make it work because it's what is best for him and his basketball career. We'll just have to be patient on this one.

Thanks, True, for your helpful insight.

Well stated, truefan. It is very hard for a parent to let her/his son or daughter move out of the nest and into the world. The natural inclination is to want to continue to provide a safety net under him that first year,

And of course she wants to see him play. It might help her to know that KU's national and regional telecasts are available for every game except a couple of exhibitions. I don't recall seeing MU on my TV schedule more than 5-6 times each year.

chill out. The other guys need to chill out also.

I bet you throw temper tantrums when you don't get what you want. You are probably stomping your feat and crying right now because Ben's mommy won't let him come over to play.

Wow, one must wonder if RJC isn't a tiger in Jayhawk clothing.

With all the crap Vitale was spewing in the preseason about KU finishing 5th in the Big 12. I got to hand it to him for this comment. Whether it was intentional or not. On his ESPN chat a guy submitted a question clearly making it known he was a Mizzou fan and I love Vitale's response......

Hey Dick, who do you think will give Kansas a run for their money in the Big Twelve?

I think with Selby there, Kansas is the favorite, but certainly Texas, Baylor and Kansas State when at full strength can be competitive in the conference.

truefan....not quite that bad.....but if you wanna see some pathetic acting babies.....look at all the gill haters and the things they post......

ok so i don't know his mom at all and i should lay off till i know more, but hasn't it been said she doesn't like self or atleast not as much as anderson??? i just get the feeling she has something against KU and for what reason who knows

truefan....not quite that bad.....but if you wanna see some pathetic acting babies.....look at all the gill haters and the things they post......

ok so i don't know his mom at all and i should lay off till i know more, but hasn't it been said she doesn't like self or atleast not as much as anderson??? i just get the feeling she has something against KU and for what reason who knows

I check multiple KU sites daily including rivals which I have a subscription for and no one that writes articles for any of those sites has said anything about Ben's mom not liking coach Self. The only people I've heard that from are posters who drum up conspiracy theories about Ben's mom wanting him to play for an African American coach. I believe it's BS and so do the guys who get paid to talk to recruits and write the articles. I think MU is closer to home and she's probably more of an MU fan because she lives in Missouri.

I've read plenty of the Gill hater posts and I call them out too. I'm on board with Gill and I'm glad you are too.

Is the post right...Mclemore is a 6'5" forward? That seems really short for a forward. Maybe I am wrong.

To McLemore's Mom: Give Ben your KU blessing...you won't be disappointed! Great state, great fans, great team, and the best coach ever.

With a post about Dick V. mixed in with all this Missouri talk, two things occur: 1. Dick is waking up to reality of 21st century collegiate hoops power programs and coaches...among which unearthings is a wheatfied location in Lawrence, Kansas. 2. If Dick is considering Baylor as a legitimate threat for the Big 12 title, then he had best not omit Missouri as a noteworthy contender along with K State and Texas.

Could it be that Dick's power of prognostication has pretty much gone the way of his forelock? His Basketball History 101 might still spew like Old Faithful, but grasp of current 2010/11 Division 1 hoops is mired in his occasional harvesting of East Coast sportsrags.