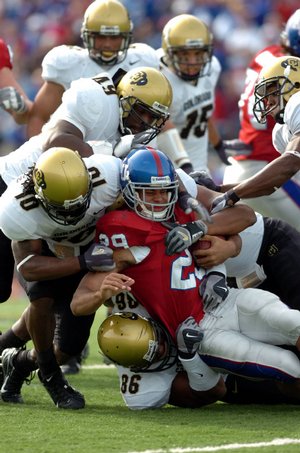 Jon Cornish became the ninth player in Kansas history to rush for 1,000 yards in a season, running for 80 yards on 23 carries. Cornish has 1,041 yards on 193 carries, best in the Big 12 Conference.

¢ Kansas dusted off the red uniforms for the second time this season after a two-game losing streak in the traditional blues. Kansas is 4-0 when wearing the red jerseys, beating Louisiana Tech, Missouri, South Florida and Colorado in the last two seasons.

¢ Aqib Talib lined up at wide receiver in the second quarter, and on his first play in had a pass thrown to him. He was blanketed by coverage, though, and the pass fell incomplete. It was his only play on offense Saturday.

¢ Dominic Roux has been moved to the defensive secondary after being used sparingly as a wide receiver in his first four years. Roux, a speedy fifth-year senior, now wears jersey No. 30 instead of his usual No. 80. He recorded his only tackle on his first defensive play.

¢ Backup cornerback Blake Bueltel did not suit up Saturday.

¢ Freshman quarterback Kerry Meier did suit up and threw passes in pregame. He did not play because of a shoulder injury.

¢ Jeff Foster caught his first pass of the season, a big 31-yard reception with Kansas QB Todd Reesing flushed out of the pocket on third down. It set up KU's final touchdown.

¢ Reesing's 90 rushing yards led the Jayhawks, the first time a quarterback has led KU in rushing since 2004, when Jason Swanson had a team-high 45 rushing yards against Iowa State.

¢ While Colorado safety Ryan Walters was returning his fumble recovery 95 yards for a touchdown late in the fourth quarter, he apparently was looking up at the live shot on the KU video board to see if anyone was closing in on him. Cornish was the only one with a chance to catch Walters, but he wasn't able to close the gap.

¢ Lawrence High product Ian Handshy played on the kickoff team Saturday, his first action of his career. Handshy, a walk-on, is a 2005 LHS grad and a red-shirt freshman linebacker for the Jayhawks.

¢ Darrell Stuckey made his first start of the season at free safety. He missed the first five games because of an ankle injury and played behind Justin Thornton upon his return. Stuckey had four tackles.

¢ At halftime, Colorado coach Dan Hawkins said on the radio, "It's World Series time, and we're playing baseball on offense."

¢ Russell Brorsen started his fourth straight game at defensive end and made his debut on the Kansas depth chart Saturday. He was listed as a backup to Rodney Allen.

¢ Strong safety Jerome Kemp was KU's leading tackler with 11 stops, including two for a loss. Joe Mortensen had nine stops, and both Anthony Webb and Brorsen had seven.

¢ Talib and Reesing, not surprisingly, were given game balls after the contest by KU coach Mark Mangino.

¢ Colorado's longest play was the last one of the game - a 61-yard desperation heave from Bernard Jackson to Patrick Williams with the clock at zero. Jackson was penalized for being in front of the line of scrimmage when the game ended, but the penalty was declined so that the game would be over. Colorado finished on the Kansas 17-yard line.

¢ Mangino has now beaten every Big 12 North team in his four-plus seasons at Kansas coach. Coming into this season, Colorado was the only North team he hadn't recorded a victory against.

¢ Estimated attendance was announced as 39,313 - the lowest turnout of the season for Kansas.

Because that would have given KU enough of a lead so that Colorado would have to score two touchdowns to tie or lead, instead of a touchdown, 2 pt conversion, and a field goal to tie.

WHY WOULD MANGINO EVER GO FOR A 2 POINT CONVERSION. YOU NEVER PLAY DEFENSE WITH YOUR OFFENSE

Yeah, I thought going for two was yet another strange decision by Mangino near the end of the game. Fortunately, KU got away with it this time.

I should say yet another strange decision near the end of A game -- meaning he makes these kinds of questionable moves on a regular basis.

One quick correction. The head referee at the game announced that the pass on the last play of the game was incomplete because it was an illegal forward pass even though the penalty was declined.

There really was no difference between being up 12 and being up 13, so why would you go for 2? I agree with others that this was simply a strange call. By not getting it, they gave CU a chance to get a TD and 2pt conversion and a FG to tie. Rather than making it 2 TDs to beat the Hawks.