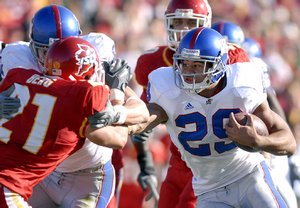 The offensive-challenged opponents the last two weeks certainly had something to do with it.

But Kansas University's young defensive football players are transitioning, and the results are starting to show on the field.

The Jayhawk defense refused to break in KU's 41-10 victory over Iowa State on Saturday, allowing just one sustained scoring drive and forcing four turnovers. Before the talk of the quarterbacks and the 41-point offensive output surfaced after the game, KU coach Mark Mangino made it a point to credit the defense for the game it played at Jack Trice Stadium.

"They're playing with a good tempo to them - fast football that we try to play here," Mangino said.

Though Colorado and Iowa State have struggled to compete offensively, the fact that KU's defense has been a strength the last two weeks is a big change of pace.

Kansas had a load of growing pains at the start of the Big 12 Conference schedule, and it led to late breakdowns and an 0-4 start in conference play. But the defense has surrendered just one touchdown the last two weeks, and it has helped put the Jayhawks (5-5) in position to become bowl-eligible for the second straight year.

The veterans are noticing the change - and pinpointing the reason. While many, like defensive backs Anthony Webb and Darrell Stuckey, are still freshmen, it's becoming clear the lumps and lessons they've endured have made them grow up in a hurry.

"When I first started out, the game was unbelievably fast," senior safety Jerome Kemp said. "As the season goes on, you start catching on to key things, and it makes the game start slowing down for you."

Iowa State's fourth-quarter touchdown - which ended a drive that started in Kansas territory - is the only touchdown the defense has surrendered since the game-losing score at Baylor on Oct. 21.

"I think you can't judge the opponent," fullback Brandon McAnderson said. "We have to judge ourselves so that we can get better, and I think we've been getting better every week.

"Since I've been here, we've always had a pretty good defense. It's good to see our defense play that way because it's always been a staple of our football teams, and it's becoming that again."

They are still here fabio. I will admit that I was one of the board posters after the Baylor game. When you win, bottom line is no one critiques. There is no reason to bash anyone when you lose. That is the nature of the beast. Keep in mind fabio that both of the last 2 wins were relatively locked up late in the game. There was no way Mangino and his staff were going to be tested on their late game strategies. I think what some people forget is that there are still real concerns about how Mangino coaches a game when it is crunch time and the game is tight. You have to admit that there was none of that in the last 2 games. Let's see how Mangino and the coaching staff fairs the next game that they have to make critical decisions to win a ballgame in the 4th quarter. That is the reason for all the bashing. Mangino has a little to prove when it comes to those type of situations.

That being said, it's good to see the young players get some momentum and confidence heading into the KSU game. Hopefully with 2 weeks to prepare, the coaching staff can come up with a game plan to beat the Wildcats and become bowl eligible.

What? No Allen supporters today? No smart comments about Mangino's diet or Meier's long hair? What happened to all the guys that had comments after the Baylor game?

Point taken. I think we will learn a lot in the next two games. KSU and Mizzou are much better than Colorado and ISU but still very beatable.