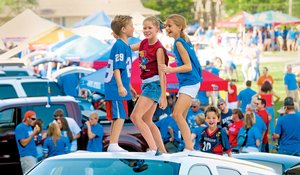 Young Jayhawk fans dance on top of a car before Kansas University's first football game of the season Saturday in Memorial Stadium. Cars were filling the stadium's parking lots Saturday afternoon before KU played against Florida International on Saturday night. The Jayhawks won 40-10 in front of a record crowd of 52,112 fans. 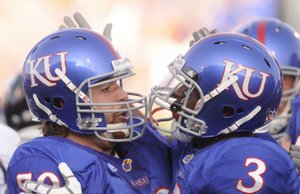 Has the KU football team's success last season raised or lowered your expectations for this season?

"You're not going to go 12-and-1 every year," he said from his tailgate spot, dubbed "Camp Mangino," before the season kickoff at Memorial Stadium.

"Last year we were the Cinderella team, so nobody was expecting it, nobody was really preparing as hard as they should have for us."

This season is a different story.

"We're not going to be able to sneak up on anybody this year," said Greg Munzer, of Independence, Mo. "They are all going to be kind of marking us on their schedule because we had such a good year last year."

While fans aren't expecting quite the fairy tale they witnessed last season, they seem pretty clear on what their happy ending entails:

"We need a bowl game," Hosler said. "Seven and 5 would be disappointing. Anything over that would be acceptable, in my book."

"I'd be perfectly happy with 8 and 4 considering the schedule's a lot tougher," Munzer said. "That'd get us a pretty good bowl, and I'd be happy with that."

"I expect us to make another real good bowl, not a BCS (Bowl Championship Series) bowl, unless we really pull something out," said KU senior Bryan Roddy, 21, of De Soto. "I expect a winning season, maybe 7 and 5, something like that."

Hice's husband, Jareb Hice, knows those expectations are there and that "fans will be disappointed if they have a season that's not somewhere close to where last season was," he said.

Recalling a time not too long ago, however, when the football program offered few thrills, fans are reminded that the program is just getting started.

"We're not there yet," Roddy said. "I think with the Mangino era, it's growing. I think as long as we keep building our program, we will become less of a joke and more of an actual threat."

"As I can see around here (tailgating near the stadium), I can tell it's a world of difference," he said about Mangino's arrival to KU. "And it makes it fun to come out here on Saturdays and have a good time."

"We're just hoping we can try to keep things rolling in a positive direction - winning records, going to bowl games and bringing in top recruits, and see where things go," Hosler said.

BULLSH!T ...Don't us Kansas fans expect the basketball team to make the Final Four every freaking year?Then we should also expect, at the very least, a New Year's Day or better bowl game every year!

the guy int he article who says that 7-5 will be a good year is wrong. 7-5 will be a dissappointment. 8-4 will be ok. 9-3 will be good. 10-2 will be great.Last year happened. It was real. And last night our team set out to prove that it wasn't the "fluke" that most people are saying it was. Seriously, we went 7-5 and won the Fort Worth bowl a few years back... and that was with Texas, Oklahoma, and Texas Tech on the schedule. We're better than that now.

I guess I should qualify my statements with saying I'd love to see the same intensity and passion for football as basketball.There are signs of progress: fans actually standing up on third downs for example ...One real problem is we gotta learn to be QUIET when the Jayhawks are on offense, especially when they're in the red zone.It takes time, I know ...

I agree with sevenyear. Times have changed and we should expect the same excellence for football as we do basketball. While I agree that expecting a BCS game every year may be a little much, we should strive for very good to major bowls each season. While I have said many times recently that I thought the season should have been sold out in advance, I applaud the fans who came out last night and were part of an attendance record on a holiday weekend for a poor non-conference team. Must have been a great walk-up. Let's have this every game the rest of the season and keep the other teams fans out. Times have changed in this regard as well and Jayhawk Nation must step up to the plate and support this program for the long haul.Yes 8-4 should be a minimum, but I think this team can do better. The fans need to be a big part of that, as some of these so called tougher games on the schedule are at Memorial Stadium. Let's do it!!

I called 10-2 before the season started last year and I'm calling 10-2 again. The team is better. They will fix the deficiencies that showed up last night and will be firing on all cylinders when they need to. WRITE IT DOWN. 10-2.

I'm thrilled with where are program is heading, and seeing the stadium full last night for an opening night game was one of the greatest things I've ever seen. But let's be real. Our football program is not yet on the same level as our basketball team. Let's focus on getting to two straight bowl games for the first time in program history. I'm all for aiming high, but I also am a realist.