Bill Self, Jay Wright agree - 2018 Final Four matchup has no bearing on this year's meeting 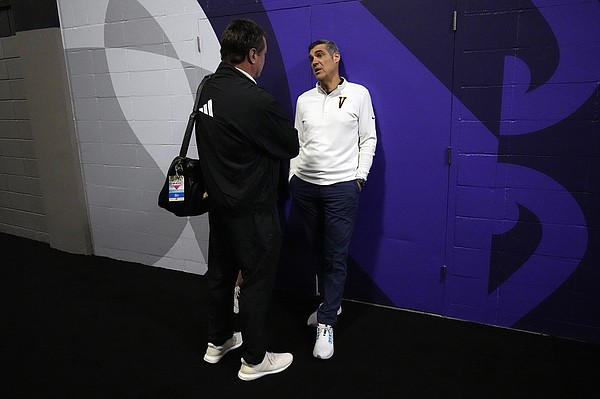 New Orleans — There have been several recent meetings between Kansas and Villanova that have taken place on some of college basketball’s biggest stages.

But no one associated with either program seems to want to talk much about them.

At least not here and not now, as the top-seeded Jayhawks and second-seeded Wildcats prepare to do battle at 5:09 p.m. Saturday in the first of two national semifinals at the Caesar’s Superdome.

The most recent meeting came in 2019, but the guy who hit the game-winning shot in that one — Villanova forward Jermaine Samuels — didn’t even mention that when he was asked about that game on Thursday.

Before that, Kansas exacted revenge for its 2018 Final Four loss to the Wildcats with a home win during the early portion of the 2018-19 regular season. That game didn’t come up at all on Thursday. The 2018 Final Four game did, though. But only for Kansas coach Bill Self to not-so-fondly remember that the game was over by the under-12 timeout of the first half.

“I haven’t wanted to think about that since 2018,” Self joked. “They were unbelievable that day. They made 18 3s. Jumped out on us 22-4. It wasn’t over before it started, but it wasn’t far off. That was a special team he had, maybe one of the best teams college basketball has seen in the last decade. When you’re that talented and that well coaches and drilled and then you play your very best on a particular day, you’re going to be tough for anybody to handle. And they certainly were too much for us that day.”

Villanova coach Jay Wright’s memory of the game was a little different.

“My recollection of that game was it was just one of those games,” Wright said. “We just made… it was ridiculous. And we’ve been on the other side of that. It happened to us this year at Baylor. Happened to us this year at Creighton. They just made every shot. We made every shot (in 2018). We don’t even count that as… We were just lucky that happened.”

While the win, which featured an NCAA-record 18 3-pointers, and 13 of them coming in the first half, propelled the Wildcats to their second national title in three seasons, Wright said his memory of that particular game fell into the ‘Aw shucks’ department.

“I remember looking down at Bill thinking, ‘I’ve been there,’” Wright said. “It just so happened in a Final Four game.”

Nothing that happened then, of course, matters today. And Wright made sure to point that out on Thursday, as well.

“I do think this year (we have) really different teams,” he said. “We don’t have the firepower that that team had. Kansas is a way faster team and much more explosive and much more perimeter-oriented than that team. So it’s almost like we’re flip-flopped in terms of what the teams are like. So different.” Here's a look at our coverage from New Orleans so far: