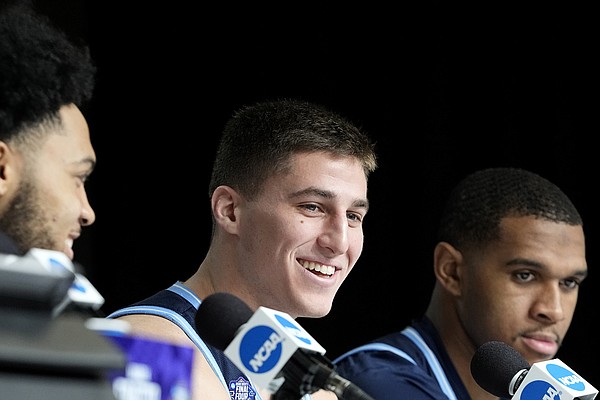 New Orleans — Villanova coach Jay Wright and his players gave their initial impressions of Kansas during Thursday's hour of press conferences. Here's what they said:

On what stands out about Kansas ...

Wright: "They're going to be one of the fastest, quickest teams we've played against. A Bill Self(-coached) team is incredibly intelligent defensively and tough, and we know we're going to have to be smart offensively against them."

Redshirt sophomore forward Eric Dixon: "We know Kansas is a great team with a lot of great individual pieces that come together very well to make them the team they are. We know we're expecting a tough battle with them."

Fifth-year senior guard Collin Gillespie: "They're really well-coached. Obviously, the last two years we saw them, I think, my junior year, and (Ochai) Agbaji was a big piece of that. (Christian) Braun was a big piece of that. (David) McCormack was on the team, so three guys that we're real familiar with that have only gotten better. And (Jalen) Wilson is in his sophomore year, so he's gotten a lot better since last year. And adding Remy Martin to it coming off the bench, being a really dynamic scorer has been really big for them. And (Dajuan) Harris steadies the ship, runs the offense.

"We're expecting a great game. Obviously, they're really well-coached and a lot of depth where they can put it inside and McCormack can score or play outside with the four guards kick it and shoot the 3 and iso and kind of score on isos."

On whether Kansas resembles any Big East teams ...

Junior Chris Arcidiacono: "I'm not sure anyone that we've played throughout the year. They're a unique team. Clearly, they're a No. 1 seed. Great team. They play tough, physical and fast. For us, we've got to make sure that we defend and rebound and play Villanova basketball the best we can for 40 minutes. I wouldn't say one team in the conference season or out of conference. They're their own unique team."

Samuels: "I don't think there's a team in the Big East or out of our conference that's similar to them. They have great balance and they all share the ball really well on top of that. They have a great front court with McCormack and (Mitch) Lightfoot. They know how to mix it up and get out in transition.

"And you add Remy Martin to the piece, and it can get really explosive in their offense. They're a great team. They know how to defend. They know how to guard as well. And they're a No. 1 seed for the reason. They won their conference tournament for a reason."

On memories of facing McCormack in the last game against Kansas in December 2019:

Samuels: "I remember that game was electric and his presence and I think — (Udoka) Azubuike's presence — they always have great guys in the frontcourt. Very physical. Know how to use angles and rebound very well. Their presence has always felt and it's always noticed. And I'm expecting — we're all expecting — to see that on Saturday."

On who Villanova must stop to be successful against Kansas:

Wright: "If you look at inside/outside, you have to say Agbaji and McCormack. The beauty of their team, you've got Remy coming off the bench and is as high-powered as anybody right now. So, you can go through any of the positions.

"And I love Wilson, how he plays. He reminds me of like a bigger Josh Hart, which is nice unless you're playing against him. When you see that it's, like, wow, Josh Hart but bigger, and that's pretty cool except we've got to play against that guy.

"And so I think the strength of their team is in their balance inside/outside; Braun, great shooter and driver."

On the characteristics of a team coached by Bill Self ...

Wright: "I would have to say they always play hard. They're always outstanding defensively, always very intelligent. And they're great in after-timeout situations, end-of-game situations — the sign of all well-coached teams." Here's a look at our coverage from New Orleans so far: