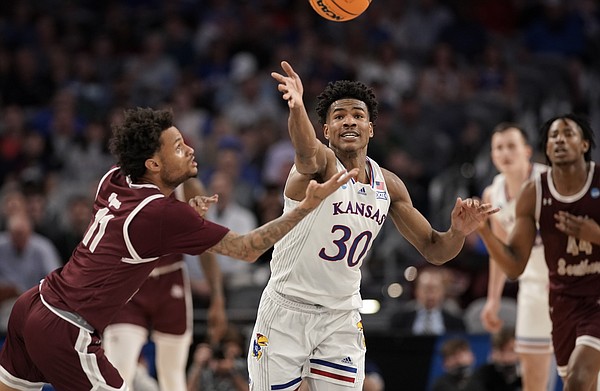 Kansas guard Ochai Agbaji (30) tips a ball away from Texas Southern guard Jordan Gilliam (11) during the first half on Thursday, March 17, 2022 at Dickies Arena in Fort Worth, Texas. by Nick Krug

New Orleans — Kansas coach Bill Self said Thursday that although he doesn't put an emphasis on recruiting players out of the Kansas City area, it is unique that guards Ochai Agbaji and Christian Braun have thrived with the Jayhawks.

Agbaji, a senior who played at Oak Park High in Kansas City, Missouri, and Braun, a junior who starred at Overland Park, have been instrumental in helping Kansas return to the Final Four.

Sixth-year senior forward Mitch Lightfoot also was born in Kansas City, Missouri, but moved to Arizona when he was 5.

"We've never put an emphasis on recruiting local kids," Self said. "We've put emphasis on, obviously, just going out and getting the best kids, and we've been able to recruit national for the most part. But it is pretty special that within 45 minutes of your home, you have arguably two of the very best wings on any team in college basketball.

"And they were recruited, but they weren't highly recruited. Whenever you're not a starter on your AAU program, that's usually not the guys that Villanova and Kansas and (North) Carolina and Duke will recruit, and they turned out to be as good as anybody we've ever recruited."

Braun, an all-Big 12 second-team player, is averaging 14.3 points and 6.5 rebounds and was selected to the all-NCAA Midwest Region team on Sunday.

That the two have thrived this season "says a lot" about basketball in the Kansas City area, Agbaji said.

"All the guys on our team that are local and from our area, it means just a little bit more to them that we're representing Kansas City well and Kansas, obviously. But being local, it's really nice to have that support from Kansas City. It's just nice."

Said Braun: "We take a lot of pride, a couple of Kansas City guys just doing what we're doing and doing it for Kansas. I think it means a lot to us because of the name on our jersey.