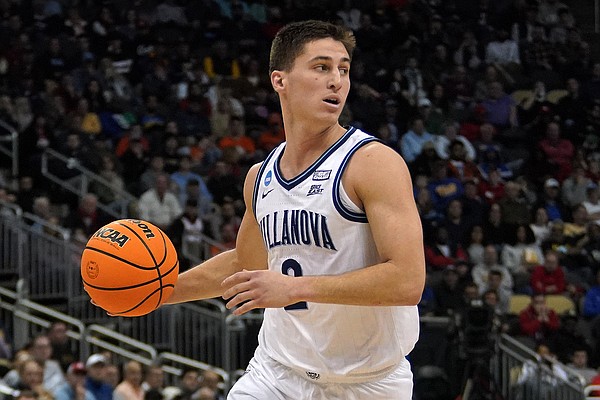 Villanova's Collin Gillespie plays during a men's college basketball game against Ohio State in the second round of the NCAA Tournament in Pittsburgh on March 20, 2022. by Gene J. Puskar/Associated Press

Gillespie, a fifth-year senior, will lead Villanova into a Final Four matchup with Kansas on Saturday at the Superdome. He's the Wildcats' leading scorer with 15.6 points per game, has scored more than 20 points in a game nine times this season and had a career-high 33 points in an 89-84 win at Big East regular-season champion Providence on Feb. 15.

The Big East player of the year this season and its co-player of the year last season, Gillespie is shooting 40.9% from 3-point range, the fourth-highest mark of any player in a major Division I conference, on 7.1 attempts per game.

Self said Gillespie reminds him of a trio of former Villanova guards: Mike Nardi, who is now one of their assistant coaches, as well as Ryan Arcidiacono and Jalen Brunson.

"All those guys have certain qualities that they can all post up, they can all take care of the basketball, they're all good shooters and they're unbelievable leaders," Self said.

"Any time you're a two-time Big East Player of the Year and, obviously, an All-American, you've got to be able to play," Self said. "I think he's really a talent, but I think his leadership and toughness equals his talent." Here's a look at our coverage from New Orleans so far: