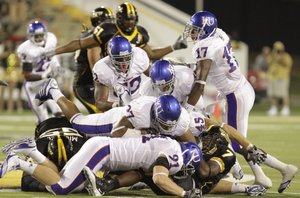 May day, May day

Getting plays from the coaching booth to the field posed a problem for Kansas University during Friday night’s 31-16 loss at Southern Miss. At various times, on both offense and defense, Kansas’ 11 players on the field were unsure of what calls the coaches were trying to make from the sidelines.

At times, the play clock was to blame. Other times, inexperience was the culprit. Regardless, it made a difficult night even more challenging from start to finish.

“Just a couple times we wanted to get some audibles in,” KU quarterback Jordan Webb said. “That just comes down to me communicating.”

Defensively, the Jayhawks played several snaps during the first half without receiving specific instructions. In the second half, when the calls started coming in, the Jayhawks appeared to play better, stopping the Southern Miss offense on consecutive three-and-out drives to open the third quarter.

“Coach just said be patient and let him get his calls in,” KU’s Chris Harris said. “In the first half, we couldn’t get his calls in, and in the second half we were more patient. We just needed to calm down and relax.”

Harris said the Jayhawks have set defenses they’re supposed to execute when the defensive calls can’t get to the field. He added that playing on the road may have contributed to his team’s frenzied nature.

“We just get a little hurried sometimes,” Harris said.

For the second time in three weeks, the KU punt team gave up a blocked punt. This one — by USM’s Tim Green — put the Golden Eagles up, 21-3, just before halftime. But it almost never came. USM coach Larry Fedora said his players talked him into trying for the block during a timeout before the kick.

“To be honest with you, I wasn’t going to come after it there,” Fedora said. “But the guys talked me into it on the sideline. Now we’re getting to the thing where they’re taking ownership of this football team, and they take a lot of pride in their special teams. They wanted to come after it, and they said, ‘We’ll stay off of him.’”

KU sophomore Toben Opurum played his first snaps of the season, lining up at linebacker on KU’s first defensive series of the night. Opurum, a former running back who was moved to linebacker this offseason, did not start, but did rotate in for a couple of plays early on. He appeared to be almost fully recovered from a sprained ankle that kept him out last week. He did not record an official tackle.

In addition to getting one blocked, KU had a rough night in the punting department altogether. On three occasions, the Jayhawks gained very little by electing to punt instead of going for a fourth-down conversion. On its first drive, KU punted from midfield but netted just 30 yards of field position when the kick from Alonso Rojas went into the end zone for a touchback.

On its second drive, KU had reached the Southern Miss 39-yard line and appeared poised to go for it on fourth down. But KU coach Turner Gill changed his mind during a timeout, and Rojas again was sent out to punt. That time, his punt was fair-caught at the 15-yard line, netting 24 yards of a field-position advantage.

Finally, on KU’s second drive of the third quarter, the Jayhawks punted despite reaching the USM 43. On that one, the Rojas kick resulted in just a 23-yard field-position shift.

One other interesting punting note came on KU’s final drive. Trailing 31-16 with just over two minutes to play, Gill elected to punt from his own end zone instead of attempting to gain a first down and keep the game alive. After fielding the punt, USM kneeled on the ball to clinch the game. However, it’s likely Fedora and company would’ve taken the same approach even if the Jayhawks had tried a pass and failed.

On a crucial USM scoring drive in the third quarter, it appeared as if standout receiver DeAndre Brown had fumbled the ball out of the back of the end zone from the one-yard line, a mishap that would’ve resulted in a touchback for the Jayhawks and kept the score at 21-10, USM. The ruling on the field was that Brown had stepped out at the one before fumbling. Gill, who admitted that he didn’t have a great look at the play, rushed all the way from near midfield down to the one to ask the official for a review.

“I just thought they were going to review it,” Gill said. “They were reviewing everything else so I thought at least that should be reviewed. I didn’t want to waste a timeout, we only had one left, but (the official) said it was clear he was out of bounds.”

KU junior Jeremiah Hatch left the game in the second half after injuring his back. Gill said he did not know the severity of Hatch’s injury.

“We’ll see what the details are here in the next couple days,” he said.

Freshman safety Keeston Terry also was injured during Friday’s loss. Terry limped off the field after the opening kickoff of the second half and did not return. No word was given on Terry’s injury.

A lot of injuries since the change in a new conditioning coach.

Really??? Are you sure it's not the fact that the injured players ate at the Dillon's on Iowa the day before the game???? If the injuries were all pulled muscles, the training could possibly raise a red flag. However, I'm not buying what you are selling...

Not sure it's fair to throw Rojas under the bus when he has been one of KU's better players the last couple of seasons...

I'm not sure its fair to blame Rojas either when you are kicking with such a short field. Also, Rojas is suppose to punt as opposed to punt protection. Three players could have blocked that ball. Pathetic.

I just wanted to let the game sink in before getting on the boards. Last night was pathetic, but we still played better than we did against NDSU (16 points > 3 points). The coaches went back to making play calling mistakes and cost the team some first downs and time outs. It was a hard game to watch, but I'm hoping the coaching staff gets things figured out as the season progresses.

I saw a few major problems. Special teams needs more practice time clearly. Play calling needs to go back to the no huddle so we can get the play in and adjust to the defense. The staff needs to pick a quarterback who they trust to make every throw. Webb wasn't trusted to throw downfield and he showed why when he chucked one straight to a USM corner, but if he can't make those plays then we need to give Pick another chance.

How could the KU guys in the press box not communicated with Gill about the fumble out of the end zone? Amazing screw-up!

Exactly what I was thinking, I was to pissed when they didn't get that reviewed!!! Could have been a big momentum switch and in football you never know.

All of that falls back to the coaching staff. They need to figure this out. It honestly should never be a problem with the coaching staff when it comes to getting the plays in. As much as these guys are getting paid and as many years of experience as they have, there is no way that should be an issue. We can live with Webb getting confused every once in awhile for a few games until he gets his feet wet, but the combination of that with poor coaching is going to cost us a lot of games.

Definitely. Rojas just did what the coaches asked, like he always does. I was more curious about the decision to punt on every one of those occasions when it only gained the team 20-30 yards.

If they would've pinned them inside the 5 each time they might have been great calls and may have changed the game... But they didn't.

The fumble would not have been overturned. None of the replays showed any convincing proof that he fumbled inside the pylon.

Yes, Coach Dawson is highly respected and was hired by KSU.

But the main reason there "seems" to be more injuries this year is because Coach Gill is more open to discussing them. Coach Mangino tried to keep every little scratch a major secret.

That's not true...who is this former strength coach that went to K-State?

It wasn't blocked, we fumbled the snap.

I am concerned about the problem we are having getting the play into the quarterback from the coaching staff. We also had that problem in the first game of the season and it should have been corrected by now. We need to go back to the no huddle and get the play going faster. Missippi did just that and their line was fired up every time along with their quarterback. Our punter has some poor blockers but he is also taking a long time ato get his foot on the ball. I would say about one second too long. We also ahad some poor tackling in this game. We have some time to improve so let's go!!

We are missing Kayl Anderson at long snapper. Those snaps to Rojas are floating back there.

Crappy venue. Absolutely terrible scheduling. The officiating was generally bad--those things happen, but no one seemed to want to be in Southern Mississippi, including fans.