1 - Devonté Graham: Led team with 17 points and added seven rebounds. Made 5 of 9 three-pointers and the rest of the team made 1 of 13. Villanova did a terrific job of taking away KU’s favorite ways of feeding Ellis and Graham did not have any assists and had three turnovers.

2 - Landen Lucas: Had to play 35 minutes because when he sat Villanova immediately fed Daniel Ochefu for easy buckets. As always, Lucas dominated the defensive boards, picking up 11 of his 12 at that end. Made 3 of 3 field goals and had two assists.

3 - Frank Mason III: Played all 40 minutes and scored five points in a 12-second stretch of the final half-minute. Pump-faked Ryan Arcidiacono into the air and hit a three-pointer with 27 seconds left and contorted his body for a layup with 15 seconds left to pull Kansas within one. Finished with 16 points.

5 - Perry Ellis: Made 1 of 5 shots, scored a season-low four points and turned it over four times.

6 - Carlton Bragg: Had a nice post feed to Landen Lucas, turned it over once and did not take a shot or get a rebound.

7 - Jamari Traylor: Scoreless with two fouls and a turnover in five minutes. Gave up buckets to Ochefu on consecutive possessions in the first half and quickly was taken out.

8 - Svi Mykhailiuk: Missed his only shot, a three-pointer from the left corner, and committed a foul during his scoreless seven-minute stretch. 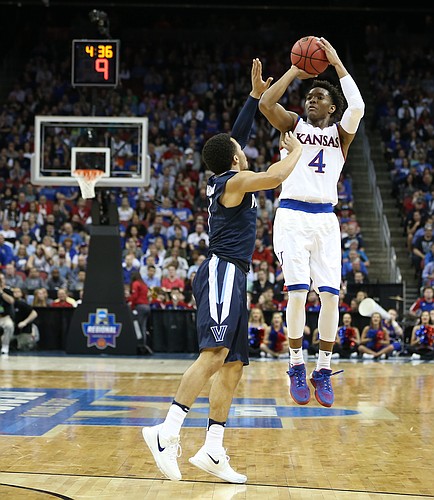 Kansas guard Devonte' Graham (4) pulls up for a three in front of Villanova guard Jalen Brunson (1) during the first half, Saturday, March 26, 2016 at KFC Yum! Center in Louisville, Kentucky. by Nick Krug 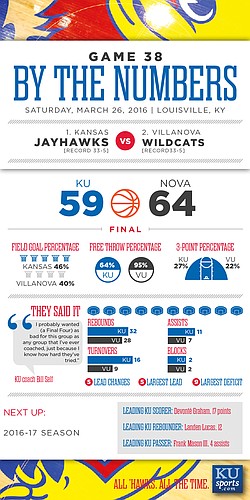 My thoughts: If Seldon hits one of his late 3s, refs call a foul on the over the back and Lucas shoots FT's with 40 seconds, refs don't make bogus call against Graham, Svi takes the ball from Mason instead of cutting back (Graham in game would have been nice), etc, etc, etc. All we needed is 1 more big play:(
= PAINFUL.
We wanted it more, held Villanova to 40 percent shooting. I don't think Perry should take take any additional blame on this one. They came after him. We needed Seldon to take over. He tried, but couldn't hit.

Rock Chalk. Go Buddy. I don't see how we lose anyone in the draft next year. So impressed how much Lucas's confidence and offense improved this season. Can't wait to see Bragg with 20 pounds + experience.

I'm not sure how you measure "want", but it was very evident that they were more aggressive, which is why Coach made the comment at half time. That's why they took 3 handoffs from our guards. 2 were out front and led to layups (Are those Perry TO's or the guards for getting beat to the ball?), plus the last play.

I was also surprised to not see Perry initiate the O from the perimeter at all for the entire game. It seemed to me that was part of what made him so much more effective lately. Instead, it seemed to be the old low post survive the swarming where he generally doesn't show the strength to fight thru for baskets, and unfortunately wasn't drawing fouls last night either.

It was a bad omen when Wayne missed his first 3 as if he had never been in the gym before. I had to remind myself that they had just won there 2 nights before.

My son and I were at the game, and we saw Wayne hit 10+ threes in a row in warmups. He basically couldn't miss. Ironically, my son commented that, if that was any indication of how Seldon would play, Villanova was in for a long night. Very frustrating game to watch from the stands--just wasn't meant to be...

It was a rough one all around. I give lots of credit to Graham though. He played tough. He played through some TERRIBLE calls and was able to stay in the game through much of his four fouls. While it is sad that he got the last one on that play, he did turn it over to start with which caused the problem.

The Frank/Svi turnover at the end of the game. Yeah it sucked. But with the cutback by Svi he was wide open so if he could have gotten the pass he had a good chance of knocking it down. If he runs through and tries to take the handoff from Frank he's got two guys draped on him from 2 foot behind the 3 point line.

WHY oh WHY does Self not use that long bench? I would love to see what could happen if no starter played more than 28-30 minutes but they played AGGRESSIVE the entire time they're in the game.